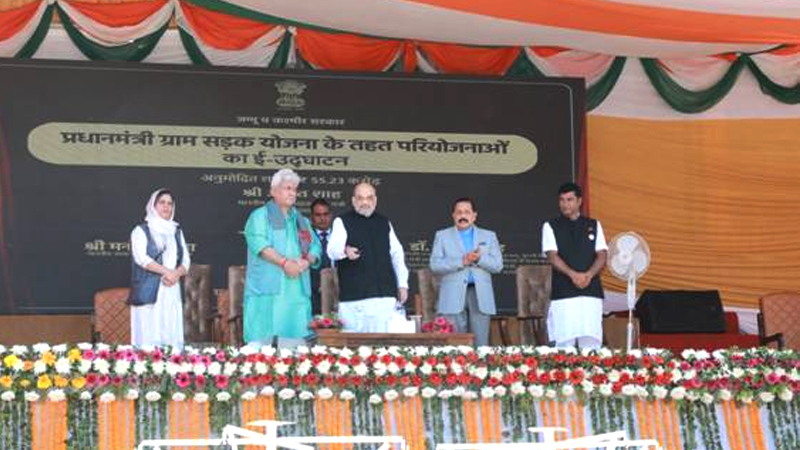 Shri Amit Shah also inaugurated and laid the foundation stones of several development projects worth crores of Rupees in Baramulla, Jammu and Kashmir and addressed a public meeting in the region.

Several dignitaries including the Lieutenant Governor of Jammu and Kashmir Shri Manoj Sinha and Union Minister Dr. Jitendra Singh were also present on the occasion. In his address, the Union Home Minister said that the hills of Pir Panjal and Chenab and this region of Kashmir Valley are among the most beautiful areas of the world. The development ushered in Prime Minister Narendra Modi in Jammu and Kashmir is clearly reflected through the happy faces of the people in the region. He said that earlier, the three families who used to rule in the region hardly worked for the development of the region. Prime Minister Narendra Modi has completed a huge task of ensuring that democracy reaches every village of Jammu and Kashmir. Earlier, the meaning of democracy in Kashmir was restricted within the three families, 87 MLAs and 6 MPs, but after August 5, 2019, Prime Minister Narendra Modi has connected 30,000 people with democracy by taking it to the level of Panch, Sarpanch, BDC and Zilla Panchayat of the village. Earlier, due to corruption, the money of the poor was being misused, but now, Prime Minister Narendra Modi is ensuring that the money of the poor will reach the poor. He said, under the rule of three families, only Rs. 15,000 crore investment came in Jammu and Kashmir in 70 years, but under the leadership of Prime Minister Modi, an investment of Rs. 56,000 crore has come in just three years. Shri Amit Shah added, earlier the region was a Terrorist Hotspot but now it has become a Tourist Hotspot. Earlier, maximum of six lakh tourists used to visit the Kashmir Valley every year, whereas this year alone till now, 22 lakh tourists have visited the region, giving employment to thousands of youth, and this process will be further strengthened. Shri Amit Shah said that earlier stones and guns were given in the hands of the youth of the Valley, but now Prime Minister Narendra Modi has replaced them with mobiles and laptops and provided employment to the youth by setting up industries in the region. The Union Home Minister said that terrorism has not led to any good in the world. From 1990 till today, 42,000 people of Jammu and Kashmir have succumbed to terrorism. He said that now terrorism is slowly being weeded out. Shri Shah said that now electricity has reached every village in Kashmir and Prime Minister Modi has ensured complete treatment up to Rs. five-lakh free of cost. He said that 77 lakh people have been given health cards so that they do not have to spend a single penny for their treatment. Earlier there were one lakh people without a pucca house to live even in the icy winds in the region, but Prime Minister Modi has provided housing to these people in Jammu and Kashmir from 2014 to 2022. The government under Prime Minister Narendra Modi has provided gas cylinders to about 12 lakh families, tap water in the homes of 58% people under the Jal Jeevan Mission and depositing Rs. 6,000 annually in the accounts of about 11.87 lakh farmers. Shri Amit Shah said that the government has initiated the political process and he wants to assure the people that as soon as the task of preparing the electoral rolls by the Election Commission is over, elections will be held within Kashmir for the people with complete transparency. The elected representatives will rule in the region. He said that earlier the delimitation was done to benefit only the people of three families, but now as a result of the delimitation, the representatives of the people will win and they will rule. The Union Home Minister said that Prime Minister Narendra Modi has ensured that Kashmir is now almost free from terror. He advised people that if someone in their village supports terrorists, then they must be reasoned with and brought back into the mainstream because terror and terrorism cannot benefit Kashmir, only democracy, industrialization, AIIMS, IIM and IIT, can benefit Kashmir. The Union Home and Cooperation Minister said that during the rule of three families, the budget of Jammu and Kashmir was merely Rs. 132 crore, while in 2022-23, under the leadership of Prime Minister Modi the budget has been increased from Rs. 132 crore to Rs. 1,515 crore. Rs.10 crore have been allotted separately for DDC and PDC. Shri Shah said that five new degree colleges are also being opened in different areas of Jammu and Kashmir and the work of setting up a residential school with 100-bed capacity for Gurjar-Bakarwal girls of Baramulla has also been undertaken by the government under the leadership of Prime Minister Narendra Modi. A Government Medical College is also being set up in Baramulla, which will enable the children in the region to become doctors and help them serve the people of Kashmir. He said that only four medical colleges were built in Jammu and Kashmir from 1947 till 2014, whereas from 2014 till 2022 under the leadership of Prime Minister Narendra Modi, the Government of India has built nine new medical colleges and 15 nursing colleges. Whereas earlier only 500 doctors used to pass out of Jammu and Kashmir, now 1,300 doctors will complete their studies and serve the country and Jammu and Kashmir. Shri Shah said that AIIMS, NEET, B.Sc Nursing College and two Cancer Institutes have also been set up in Kashmir. New medical colleges have been set up at Anantnag and Baramulla and two cluster universities have been built in Jammu and Kashmir.

Shri Amit Shah said that the expressway from Nangal to Baramulla and from Baramulla to Uri has been built at a cost of Rs. 850 crore. A 43-km road has been built connecting Baramulla to Gulmarg at a cost of Rs. 85 crore to help tourists travelling from Gulmarg to Baramulla. He said that over one lakh families are being brought under the ambit of education through a scheme of Rs. 847 crore. Two stadiums have been built in 402 panchayats of Jammu and Kashmir along with one playground in each panchayat. Additionally, two indoor stadiums are also being built at a cost of Rs. 10 crore. Shri Shah said that in the month of September this year, 13 lakh tourists visited Gulmarg. He said that installation of power plants and irrigation projects worth thousands of crores of Rupees will bring prosperity to the valley of Kashmir. In order to improve the rail network, the work on rail link from Udhampur to Baramulla has been initiated. Under the Pradhan Mantri Sadak Yojana, 119 new roads worth Rs.,3167 crore have been built. The Union Home Minister said that under the Prime Minister’s Industrial Package, an investment of Rs. 56,000 crore has come from across the country in Kashmir, which is likely to provide employment to five lakh people.

The Union Home Minister said that earlier due to Article 370, Gujjar-Bakarwal and Pahari people could not get the benefit of Reservation in education, elections and jobs, but now after its removal, they will all get the benefits. For this, Prime Minister Narendra Modi constituted the Justice Sharma Commission and once again an attempt has been made to connect the different communities by conducting a scientific survey of ST, SC and OBC. While Reservation will now be provided to the Pahari people, the Gujjar people will continue to enjoy the benefits of Reservation that they had till now, and it will not make any difference to their share. The steps taken by the Prime Minister will pave the way for reforms in Jammu and Kashmir.