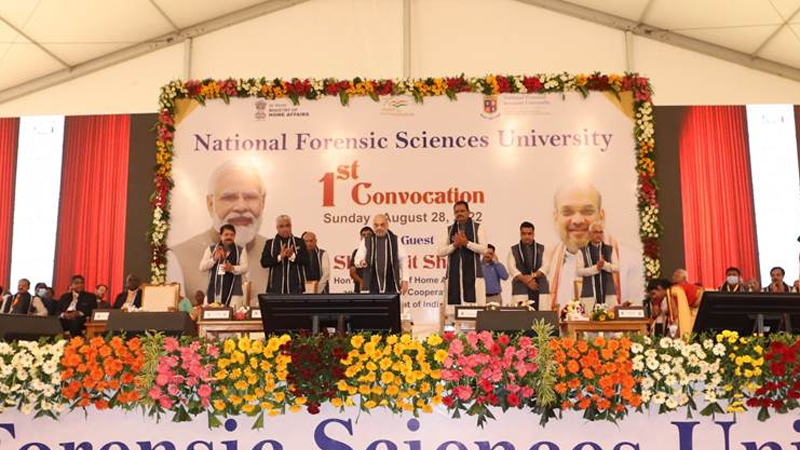 The Union Home and Cooperation Minister, Shri Amit Shah addressed the First convocation of the National Forensic Science University (NFSU) in Gandhinagar today. He also inaugurated various facilities at the NFSU campus. On this occasion the Chief Justice of the Gujarat High Court Justice Arvind Kumar, the Minister of Law of Gujarat Shri Rajendra Trivedi, the Union Home Secretary and the Vice Chancellor of the NFSU Dr. J.M. Vyas and many other dignitaries were also present on the occasion.

Congratulating the students attending the Convocation, Shri Amit Shah said this day is very important for the students as they are going into society after receiving their Degrees from the world’s first Forensic Science University. He said 1,132 students including 91 foreign students from 21 countries are going into society as experts in different fields of forensic science. The Union Home Minister expressed confidence that students pursuing their Degree would play an important role in fulfilling the purpose for which the Forensic Science University was established. 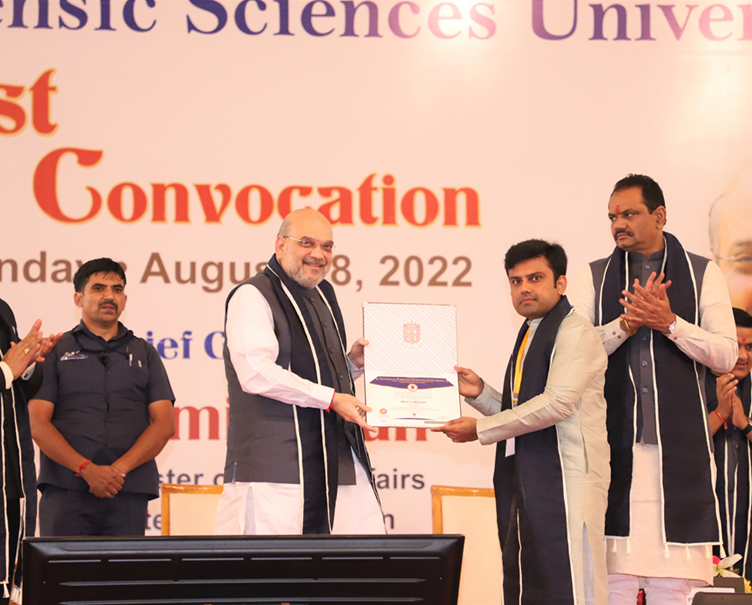 The Union Home Minister said along with the Convocation ceremony, a new campus and three Centres of Excellence were inaugurated. The way in which the University’s acceptance is increasing around the world, within a decade, this University will ensure that it becomes the best in the world. Shri Shah said the three Centres of Excellence that have been set up will strengthen students, as well as the judicial system. The Centre of Excellence in DNA will emerge as the world’s most updated DNA centre and the Criminal Justice System will greatly benefit from the Centre of Excellence in Cyber ​​Security and the Centre of Excellence in Investigative and Forensic Psychology. These three centres will become major centres for teaching, training and consultancy along with research and development and India will be the world’s hub in forensic science research. He said students studying at this University through these three centres and those receiving their degrees today shall have a big opportunity to conduct research. 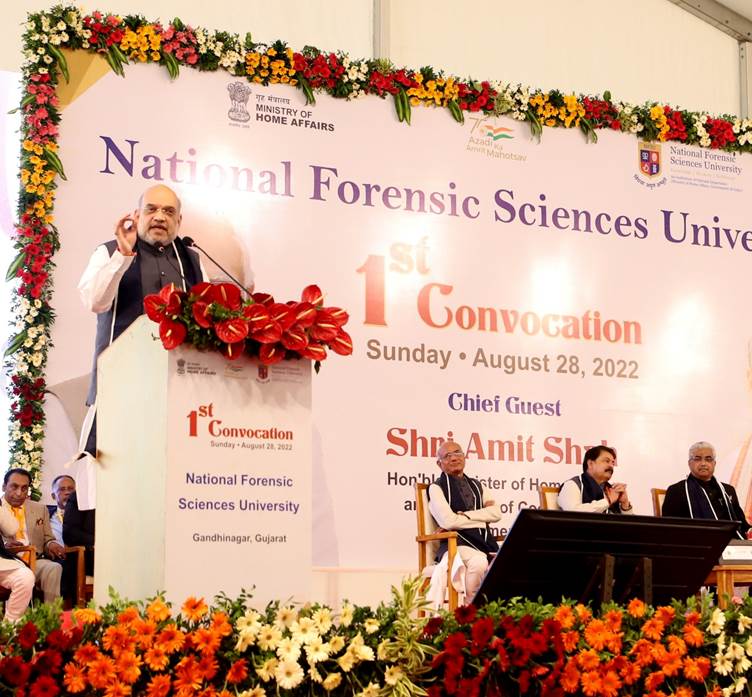 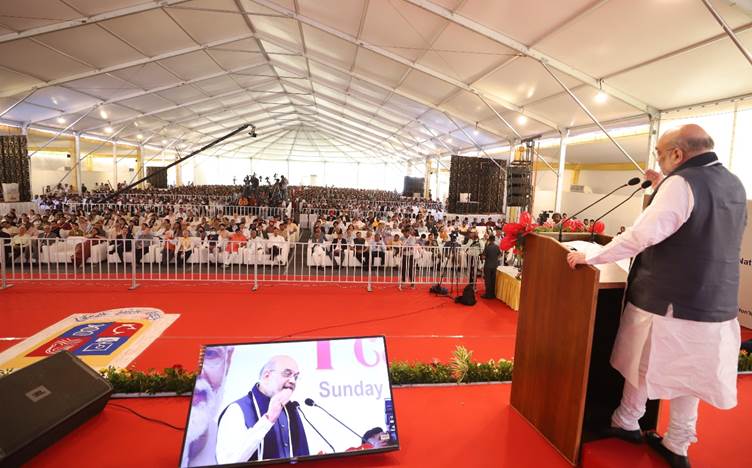 The Union Home Minister said under the leadership of Shri Narendra Modi, the Government of India will be making radical changes in the IPC, CrPC and Evidence Act, as after Independence no one has seen these laws from an Indian perspective. He said these laws need to be remade from the point of view of an Independent India, and therefore the government will be bringing changes to these three Acts after discussing these with a number of people. Forensic visits and forensic evidence in all offenses punishable with more than 6 years will be made mandatory and legal. He said for this, trained man power and their training would also have to be arranged. Shri Shah said the National Forensic Science University has been established with the vision of Prime Minister Narendra Modi and within a short period this University has opened its campuses in many States. Apart from Gujarat, its campuses have been opened in Bhopal, Goa, Tripura, Manipur and Guwahati, while discussions are on going in Pune and Karnataka and when all these campuses work together, the nation will have trained manpower.

The Union Home Minister said that to strengthen forensic science in, the government is laying the main emphasis on research on the four pillars of forensic infrastructure, forensic expert man power, forensic technology and forensic science so that India can be the world leader in this field. He said in order to strengthen the infrastructure of forensic science, the Government of India under the leadership of Shri Narendra Modi is supporting many States and it is expected that by 2025, the setting up of a campus of the National Forensic Science University in every State will be completed. The Union Home Minister said much work has also taken place to provide forensic science lab technology. Realizing the vision of a self-reliant India, two forensic science mobile labs have been established, and both labs have been made by Indian companies and they are completely indigenous. These labs are also the most modern in the world. He said such mobile labs would become available in every district. Shri Shah said it is only by setting up forensic science laboratories in every State, changes in IPC, CrPC and Evidence Act would be taken to a decisive conclusion. The Union Home Minister said this is not the age of third degree, and the guilty will be given punishments on the basis of scientific evidence, and the proof of conviction will also increase.

Shri Amit Shah said one of the main points of the New Education Policy announced by Prime Minister Narendra Modi is to connect the youth with the development of the country by creating new types of programmes in universities by keeping the future needs of the country in mind. The National Forensic Science University fulfils this point. He said the New Education Policy lays great emphasis on imparting both knowledge and skills to the youth based on future needs. He said the National Forensic University has been given the status of an Institution of National Importance so that it is accepted across the country and students from all States receive equal educational opportunities. He said more than 70 countries and many organizations have signed more than 158 MoUs with the Forensic Science University, which is a matter of great pride.

The Union Home Minister said the National Forensic Science University is not only creating experts in forensic science, but is also making preparations for training all organs of the criminal justice system including police officers, public prosecutors and persons working in the judiciary. He said till now the training more than 28,000 officers associated with the Criminal Justice System has been completed at this University. Shri Shah said we are moving forward with the goal of a US $ 5 trillion economy and under the leadership of Shri Naarendra Modi, and India is going to be a global manufacturing hub.  In this situation, many challenges such as narcotics, counterfeit currency and cyber attacks are emerging. Forensic science will have to be strengthened and forensic science students will have a very important contribution in dealing with these challenges. He said the government aims to integrate the criminal justice system with the Forensic Science University so that conviction rates can be made better than those of developed countries.

Shri Amit Shah said a legal framework would be created to provide forensic mobile investigation facilities in every district and to maintain independence and impartiality of investigation. He said the Ministry of Home Affairs has taken several initiatives in forensic science from the Directorate of Forensic Science Service, the National Forensic Science University to the launch of National Judicial Science. Simultaneously, strengthening of the CFSL, laying an infrastructure web for DNA tests across the country and establishment of the Indian Cyber ​​Crime Coordination Centre have also been taken. Under the NAFIS, the fingerprint data of about 2 crore criminals across the country have been made available online, the Nirbhaya Fund has created a variety of facilities in cases of sexual abuse and atrocities against women.

The Union Home Minister said this is also an important day for the students as they are receiving their Degrees in the year Azadi ka Amrit Mahotsav. As beautiful, interesting and contemplative as our journey of 75 years is, even more painful was our struggle for Freedom. He said that the youth should not forget even for a moment, our great Freedom Fighters who sacrificed everything for India’s Freedom. If students remember this, then they will be able to contribute significantly to nation’s development as well as their own development. Shri Shah said the Degrees awarded today will not only benefit students, but if they are used to bring improvement of society and social reform, then it will benefit the country. Shri Shah quoting Mahatma Gandhi, said the importance of education is only when its fragrance spreads all around and makes society fragrant as a whole.

Shri Amit Shah told the students present at the Convocation ceremony that they must keep working for up-gradation of society and the system. The top priority for students receiving their Degrees should be to work for themselves as well as for others and the country as this gives more satisfaction and joy. Urging the students and youth to never forget their Mother Tongue, the Home Minister said one should study in any language but should speak their Mother Tongue at home, and this effort will help the country a long way. He said the government is now promoting education in Mother Tongues in technical courses including medical and engineering. Shri Shah said students and the youth should preserve their Mother Tongues ​​and speak, write and read in their own languages at home.