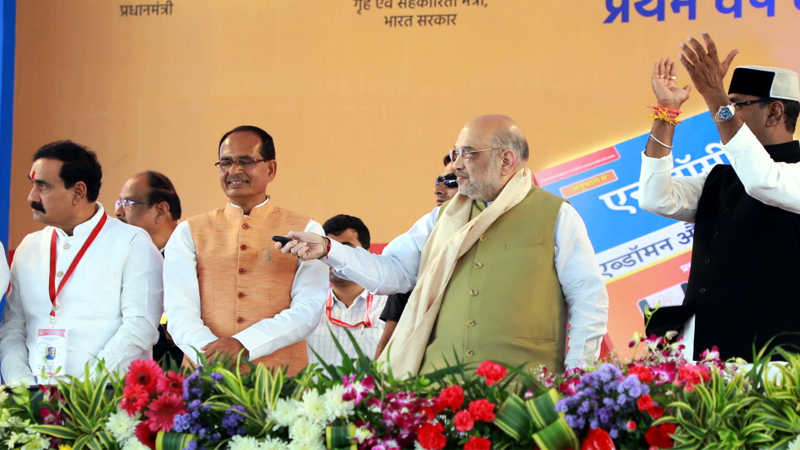 Union Home and Cooperation Minister Shri Amit Shah launched the first MBBS course in Hindi in the country today, in Bhopal, Madhya Pradesh. Many dignitaries including the Chief Minister  of Madhya Pradesh Shri Shivraj Singh Chouhan were present on the occasion.

In his address, the Union Home Minister said  this day is very important for the Medical sector in the year of the Azadi ka Amrit Mahotsav, and will be written in golden letters in times to come. He said this is the day of renaissance and reconstruction of the Education sector of the country. Shri Shah said that Prime Minister Narendra Modi has taken a very historic decision in the New Education Policy, by giving importance to the Mother Tongue of students in Primary, Technical and Medical education. He said  Prime Minister Narendra Modi had given a call to provide Medical and Engineering education in  regional languages ​​such as Hindi, Tamil, Telugu, Malayalam, Gujarati, Bengali and the Government of Madhya Pradesh led by Shri Shivraj Singh Chouhan is the first fulfil Shri Modi’s wish. 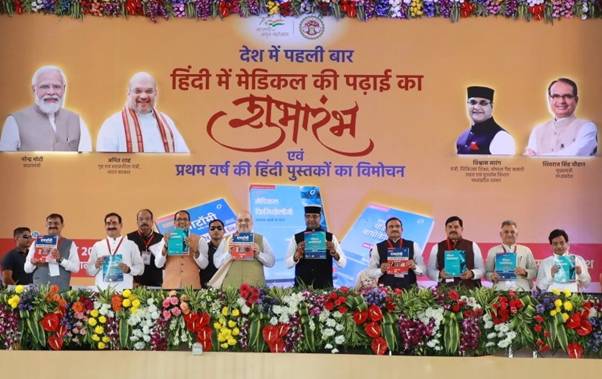 The Union Home Minister said  Madhya Pradesh is the  first State to implement Prime Minister Narendra Modi’s New Education policy and is implementing it in a very good way. Shri Shah told  students that the thinking process  is done the best  in the Mother Tongue and words spoken in the Mother Tongue touch the Heart. He said the Mind processes  thinking, revision, Research, reasoning, analysis and arriving at a decision in ones Mother Tongue. He said if studies and Research are conducted in the Mother Tongue, then Indian students are no less competent than students from other countries, and they will bring laurels to India in Research.

Shri Amit Shah said in the 21st Century some forces adopted the Brain Drain Theory and today Prime Minister Modi is converting this theory into the Brain Gain Theory. He said today under the leadership of Shri Modi, the New Education Policy has begun to give importance to our languages. We have begun conducting the JEE, NEET and UGC examinations in 12 languages ​​of the country. Similarly, the Common University Entrance Test is being conducted in 13 languages and 10 States have commenced teaching Engineering courses by translating them into Tamil, Telugu, Marathi, Bengali, Malayalam and Gujarati.

The Union Home Minister said studying in ones own language ​​will definitely enhance the abilities of students. He told students across the country that they should come out of their linguistic inferiority complex,as today there is a government led by Shri Narendra Modi and they can showcase their abilities in their

own language. He said Prime Minister Narendra Modi has a message for the  world when he gives speeches in global forums in the Official Language Hindi. He said when Shri Modi speaks in Hindi on the global stage, the confidence of the youth across the country increases.

Shri Amit Shah said the Government led by Shri Narendra Modi  has made many changes in Technical and Medical education. Shri Shah said in 2014 there were 387 medical colleges and these have increased to 596, the number of MMBS seats have increased from 51,000 to 79,000. There were 16 IITs which are now 23, there were 13 IIMs which are now 20 and there were nine IIITs  which are now 25. In 2014, there were 723Universities in the country, which have been increased to 1,043 by the Government under the leadership of Shri Narendra Modi. He said there is going to be an educational revolution due to the restoration in the pride of our languages ​​through the New Education Policy of Shri Modi and making arrangements for Technical, Medical and Legal studies in the country.Shri Shah said that those who spread the usage of English have associated language with intellectual ability, but there is no relation between language and intellectual ability. Language is only a medium of expression whereas intellectual ability is a natural gift which can be improved through education and if education is given in the Mother Tongue then it is very beneficial in improving intellectual ability. He said after today’s launch, India will go a long way in global research and the intellectual potential of our students will also be placed before  the world.