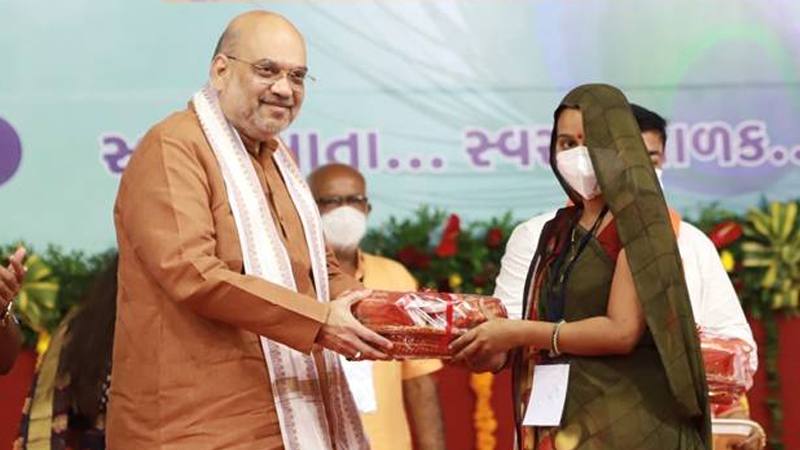 Union Home Minister, Shri Amit Shah launched nutritious a ‘Laddu Distribution Scheme’ for pregnant women in his Parliamentary constituency Gandhinagar today. On this occasion, Shri Amit Shah said that today is the festival of Janmashtami and on this day, 5,100 years ago, Lord Krishna was born. He said that Lord Krishna was born at a time when the country needed someone who couldshow it the way to tread the path of Dharma. Lord Krishna was a thinker with a multi-dimentional personality, who created the “Geeta” and established Dharma. It is a matter of pride for the people of Gujarat that Gujarat was his Karmabhoomi. Shri Amit Shah greeted all countrymen and people from across the world on the occasion of Shri Krishna Janmashtami.

Union Home Minister congratulated Indian medal winners at the Tokyo Paralympics. Shri Shah said that child form of Lord Krishna is considered a model for a healthy child and it is a pleasant feeling that from today, around 7,000 expecting women in Gandhinagar will be provided 15 nutritious laddus each, free of cost, every month through NGOs till the birth of their child. He said that there will be no expenditure by the Government, as the responsibility for this will be borne by the NGOs. Shri Amit Shah said that ‘Azadi Ka Amrit Mahotsav’ is in progress and in August, 2022, when the 75 years of Independence will take place, Prime Minister, Shri Narendra Modi has set a target of keeping mothers and children healthy. The Prime Minister has said ‘Sahi Poshan, Desh Roshan’, no country can become bright and glorious without its mothers and children being fed a nutritious diet. He said that no country can move forward if its children and their mothers are not healthy. 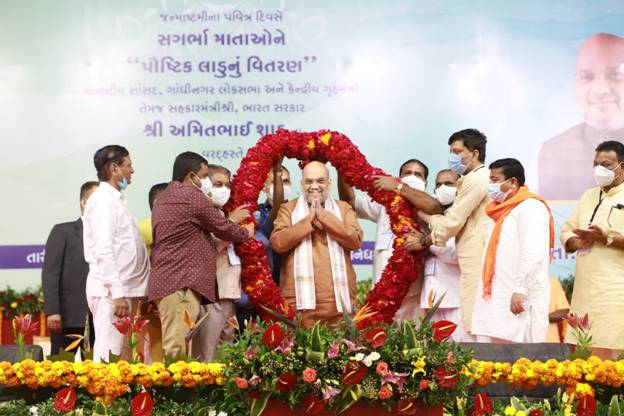 Shri Amit Shah said that it is his responsibility to ensure that there should not be a single mother and child who remain with malnutrition. He said that women need nutritious diet most when pregnant and a laddu contains protein, ghee, vitamins and it can be eaten throughout in a month.

Union Home Minister said that the Centre and the State Government have started a number of nutrition-related programmes. In three years, around 7.5 crore pregnant women and three crore lactating mothers have been given180 doses of folic acid supplement, to keep them healthy.He said that under the Pradhan Mantri Surakshit Matritva Abhiyan, started in 2016, around three crore women undergo pre-natal tests. He said that the Government of India has launched many schemes. Around 8.6 lakh smart phones have been given to Anganwadi and ASHA workers. 18 Ministries have joined hands under a collective campaign to deal with issues related to malnutrition and spreading awareness about the Poshan Abhiyan. 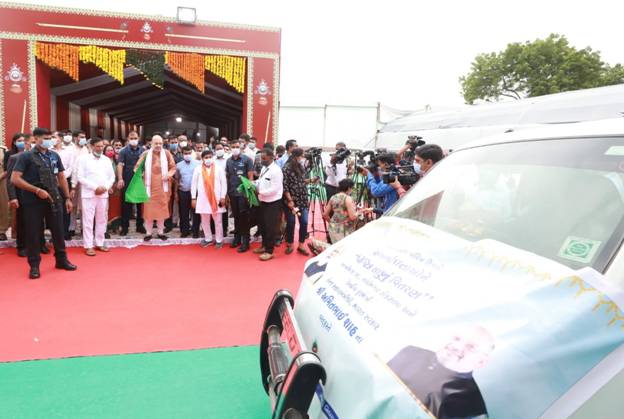 Shri Amit Shah requested heads of Gram Panchayats that no eligible person is deprived of any benefit of any government scheme and it is the responsibility of all elected representatives to ensure this. He said infrastructure development will continue, however empowerment of the weak, poor, backward, women and providing children their rights ismost important in a democracy, and if we are able to do these then only can we fulfil our responsibility as elected representatives.

Union Home Minister said that the implementation of all schemes is necessary but there is no meaning ifthese benefits if the beneficiaries remain weak, under-nourished and poor, as in a democracy, an individual is the first and smallest unit.