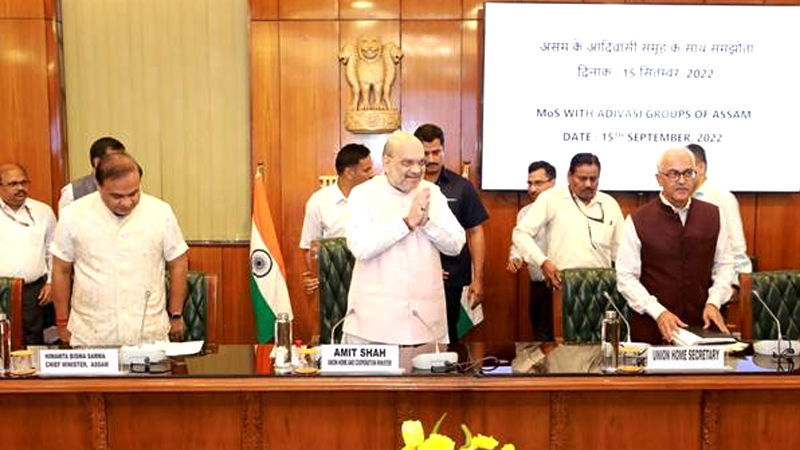 On the occasion of the historic agreement signed today, the Union Home Minister said that in accordance with the Prime Minister Shri Narendra Modi’s vision of a peaceful and prosperous North East, this agreement will prove to be another important milestone in the direction of making North-East extremism free by 2025. He said that after Shri Narendra Modi became the Prime Minister, many efforts have been made in the direction of making the Northeast peaceful and developed, the most important of which is to establish peace in the Northeast. Shri Shah said that 1182 cadres of tribal groups of Assam have joined the mainstream by laying down arms.

Shri Amit Shah said that the Ministry of Home Affairs has taken steps to develop the northeast by promoting and developing the rich culture of the region, settling all disputes, establishing peace and accelerating development in the Northeast to make it peaceful and prosperous. He said that due to lack of communication and conflict of interests, different groups took up arms due to which thousands of lives were lost in the encounter between these groups and the state governments and central security forces. The Home Minister said that the Central Government, under the leadership of Prime Minister Shri Narendra Modi, has decided that before 2024, all border disputes between the North Eastern states and all disputes related to armed groups will be resolved. Shri Amit Shah said that as per today’s agreement, it is the responsibility of the Government of India and Assam to fulfill the political, economic and educational aspirations of the Adivasi groups. He said that in the agreement, provisions have been made to protect the social, cultural, ethnic and linguistic identity of Adivasi groups as well as to further strengthen them. The agreement also provides for the establishment of a Tribal Welfare and Development Council with a view to ensure speedy and focused development of tea gardens. Shri Shah said that the agreement also provides for rehabilitation and resettlement of armed cadres and measures for the welfare of tea garden workers. A special development package of Rs.1000 crore (Rs.500 crore each by Government of India and Government of Assam) will be provided over a period of five years for infrastructure development in villages/areas with tribal population.

The Union Home Minister said that since 2014, around 8,000 insurgents have joined the mainstream of society by laying down their arms, expressing their confidence in several steps taken by Prime Minister Shri Narendra Modi for peace and prosperity of the Northeast. The year 2020 recorded the lowest number of insurgency incidents in the last two decades. In comparison to 2014, there has been a 74 percent reduction in the incidents of insurgency in 2021. In the same period, there has been a 60 percent reduction in the casualties of security forces and 89 percent in the number of civilian casualties.

As per the vision of Prime Minister Shri Narendra Modi of peaceful and prosperous North East, this agreement is another significant milestone in the direction of making north-east insurgency free by 2025.

The agreement provides for setting up of an Adivasi Welfare & Development Council by the Govt. of Assam with the objective of fulfilling the political, economic and educational aspirations; protecting, preserving and promoting social, cultural, linguistic and ethnic identities; and ensuring accelerated and focused development of the Adivasi inhabited villages/ areas as well as tea gardens all over the State. The agreement also provides for rehabilitation and re-settlement of armed cadres and measures for welfare of the tea garden workers. A special development package of Rs.1000 crore (Rs.500 crore each by Govt. of India and Govt. of Assam) will be provided over a period of five years for development of infrastructure in Adivasi inhabited villages/areas.

The Government of India, under the leadership of Prime Minister Shri Narendra Modi, is committed to make the North East free from extremism. After Independence, the pace of development in North Eastern States had stopped which were a victim of neglect and politics for a long time and violent separatism was spreading its feet, Shri Modi  wrote a new saga of development and peace with the Act East Policy.