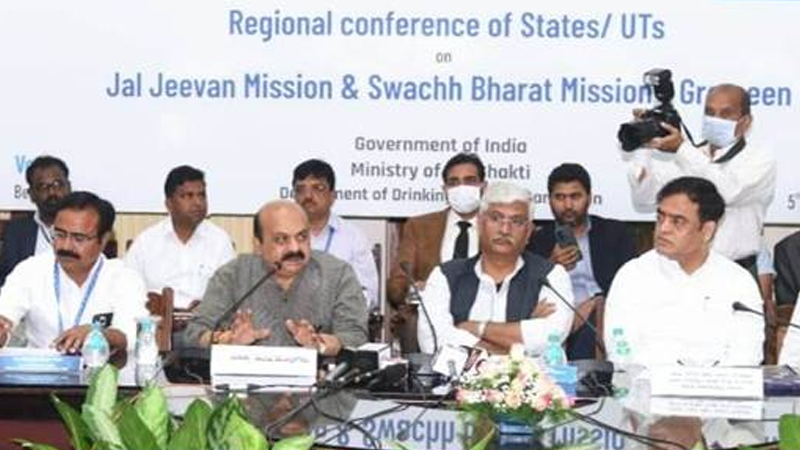 The Union Minister, Jal Shakti Shri Gajendra Singh Shekhawat, addressing the conference said “Government of India accords top priority to Jal Jeevan Mission (JJM) and Swachh Bharat Mission (Grameen) which is evident from the funds allocated by the Centre to the States/ UTs for the implementation of these two flagship programmes. Funds to the tune of Rs. 20,487.58 Crore is allocated under JJM and an amount of Rs 1,355.13 Crore is allocated under SBM(G) for the participating 6 States and UT of Puducherry in the current financial year and under 15th Finance Commission, Rs 7,498 Crore have been allocated as tied-grant to 6 participating States.,”.

The Union Minister, expressing his concern during the inaugural address said, “We need to bridge the gap between the rural and urban. In line with the philosophy of Prime Minister Shri Narendra Modi of ensuring ‘no one is left out’, we are marching ahead to achieve 100% tap water connectivity to all rural households of the country. Both JJM and SBM(G) have travelled half way and people need to understand the importance of taking forward these programmes. Jal Jeevan Mission is the world’s largest drinking water project. When the programme was launched, we were at 17% and today we have provided nearly 6 Crore tap water connections in the last 2½ years and stand at 47%, despite challenges of Covid-19.  It is important to plan, issue work order and ensure work starts especially where multi-village schemes are proposed as it will take longer time to complete. We cannot miss the target deadlines set for 100% tap water coverage across all States/ UTs”.

Shri Shekhawat further added that “JJM is not just a programme of laying water supply infrastructure, we need to ensure long term sustainability and functionality through water source strengthening, grey water management, community participation, empowerment, etc. so that water is available for the next 30 years as per the design of the water supply scheme”. The Union Minister also said, “the Ministry is committed to provide drinking water of prescribed quality to every rural household. It has come to our notice that there are 86 Fluoride affected habitations in Andhra Pradesh and 52 in Madhya Pradesh which deserve immediate remedial action. Similarly, there is information that in eastern districts of Karnataka water contamination is reported due to Uranium. My Ministry will provide all funds and technical assistance to address these problems.”

“As we plan our work in States/ UTs, it goes without saying that top priority must be accorded to Aspirational districts, JE/ AES affected districts, Sansad Adarsh Gram Yojana (SAGY) villages and SC/ ST majority villages and also dove-tailing of funds from other schemes such as MGNREGA, CAMPAA, etc. If immediate clean tap water cannot be provided in quality affected habitations, then as a purely interim measure, Community Water Purification Plants (CWPPs) may be taken up to provide 8-10 lpcd potable water to meet drinking and cooking needs of every household residing in such villages,” said the Union Minister.

The Union Jal Shakti Minister congratulated Telangana and Puducherry on providing tap water connection in all its rural households. He hoped that Madhya Pradesh will work with ‘speed and scale’ to ensure that all its rural homes gets access to tap water connection by 2023 followed by Karnataka, Kerala, Andhra Pradesh and Tamil Nadu in 2024. The Union Minister further said, all support will be provided to Lakshadweep by Jal Jeevan Mission to plan and achieve ‘Har Ghar Jal’ as per the national deadline of 2024.

Talking about Swachh Bharat Mission, the Union Minister said, “SBM(G) achieved the impossible task of increasing the sanitation coverage in just 5-years from 39% in 2014 to 100% by 2019. Under the programme, 10.28 Crore toilets were built in the country and all the districts declared themselves Open Defecation Free (ODF). It is the world’s largest behaviour change programme. As ODF was just a landing platform, under SBM(G) Phase-II we aim to make villages ODF Plus thereby ensuring that ODF status is maintained. The GPs are taking up solid and liquid waste management under the Village Action Plan.”

Shri Basavaraj Bommai, Chief Minister of Karnataka said, “Prime Minister Shri Narendra Modi is the first leader to the take the problem of water head-on and announced ‘Jal Jeevan Mission’ in August, 2019. My State accords highest priority to the water supply programme and we have allocated Rs 7,000 Crore for drinking water sector in 2022-23. Water is not just a local but also a global problem. It cannot be solved only by creating water supply infrastructure, it requires better planning, continuous monitoring, O&M, source sustainability, coordination between different stakeholders, river basin management and efficiency in using water for irrigation.” The Chief Minister assured that his State will work with ‘speed and scale’ to achieve the target set by the Prime Minister to provide every rural household with clear tap water by 2024.

While setting the agenda Smt. Vini Mahajan, Secretary, Department of Drinking Water and Sanitation (DDWS) said, “Union Minister is leading the discussion- region wise on the progress of both JJM and SBM(G) flagship programmes of Government of India. As we are entering the next financial year, it is essential that the Annual Action Plans are prepared meticulously so that our achievements meet our annual targets. This conference is an opportunity for firming up our annual plans for 2022-23, apart from the discussions on implementation challenges. SBM(G) and JJM are two transformational missions which provide ‘ease of living’ especially to women and young girls.  States must ensure that provision for adequate state share under JJM is made in States’ budget for 2022-23.”

Shri Arun Baroka, AS & MD (JJM and SBM(G)) while making the detailed presentation of both JJM and SBM(G) at the conference emphasized that States/ UTs need to expedite the coverage and focus on grey water management in villages which have provided 100% tap water connection to its rural population. There is need to prioritize Solid and Liquid Waste Management (SLWM) works in all the villages. The programme aims to convert aspiring ODF Plus villages into model ODF Plus villages. The States need to ensure that the funds released under the programme for water and sanitation activities must be timely utilized so that next tranche can be released and the speed & scale of programme implementation is as per the set goal.”

There are a total of 117 Aspirational districts in the country while 19 of these districts fall in the participating States. So far, under the programme, Telangana has provided tap water connection in all its three Aspirational districts while in other States the coverage ranges between 19% to 52%. There is need to pick up speed so that people living in the region soon get access to clean drinking water.

So far under the programme, 92,366 Village Water and Sanitation Committees have been constituted and 82,646 Village Action Plans have been developed in the participating States and UT of Puducherry. There are a total of 588 water testing laboratories of which 136 are NABL accredited. These water testing laboratories are opened for public where they can carry the water sample and get it tested at nominal rates.

As on date, in participating 6 States and 2 UTs, more than 2.40 lakh women have been trained on how to perform water quality test using Field Test Kits. These women are part of the 5-women surveillance committee which is assigned the task to frequently check the sources and delivery points and report in case any contamination is found so that immediate remedial action can be initiated.

As on date over 9.13 Crore rural households are getting water through taps and 101 districts, 1,159 blocks, 67,547 gram panchayats and 1,39,579 villages have become ‘Har Ghar Jal’ in the country. Three States – Goa, Telangana and Haryana and three UTs – A&N Islands, D&N Haveli & Daman & Diu and Puducherry have provided 100% tap water coverage.

An ICT Grand Challenge was conducted by the Ministry of Jal Shakti, Department of Drinking Water & Sanitation, in partnership with Ministry of Electronics & Information Technology. The winner of the Challenge is M/s Rydot Infotech Pvt. Ltd from Gujarat. The other three runners up are M/s Greenvironment Innovation Marketing India Pvt. Ltd and M/s GLOBALm Pvt. Ltd, the Consortium of EyeNet Aqua Solutions Pvt. Ltd. and Ilonnati Innovations Pvt. Ltd. ICT grand challenge was to help Indian start-ups to come out with cost effective solutions to monitor rural water supply. The start-up was given mentorship for technical support by expert from industries and academia. The technical challenge was also to develop in-house smart monitoring system to idea of ‘atma nirbhar bharat’. The startups carried out pilots in 100 locations across country in different agro-climatic zones. The monitoring of water supply in these villages is available through JJM dashboard. The four awardees of the Grand Challenge were felicitated at the conference by the Union Minister of Jal Shakti and other Ministers

SBM(G) Phase-II was approved in February, 2020 with a total outlay of Rs 1,40,881 Crore to focus on sustainability of ODF status and Solid and Liquid Waste Management (SLWM). It is a novel model of convergence between different verticals of financing. Apart from budgetary allocations by Department of Drinking Water and Sanitation and corresponding State share, remaining funds are being dovetailed from 15th Finance Commission tied-grant to Rural Local Bodies, MGNREGS, CSR funds and revenue generation models, etc., particularly for SLWM.

Under Phase II of SBM(G) over 66 lakh individual Household toilets and 1.2 lakh Community toilets have been built. More than 44,575 villages declared themselves ODF Plus. In the current financial year, over 5.61 lakh individual household toilets and around 11,000 community sanitary complexes were made made by the participating States/ UT. In these States/ UTs more than 31,000 villages have become ODF Plus, over 35,739 villages have been covered with solid waste management arrangements and over 9,386 villages have achieved liquid waste management arrangements.

Under SBM, Sujalam campaign was started which focuses on creation of grey water management assets to accelerate momentum in ODF Plus villages. The campaign assigns priority to grey water management, conserving and cleaning water bodies and retrofitting of single pit toilets to twin-pit toilets. Over 5.03 lakh household level soak pits and more than 78,000 community soak pits/ leach pits/ magic pits have been built in the 6 participating States.

SBM(G), is the world’s largest sanitation drive, which led to construction of over 100 million IHH, taking sanitation coverage from 39% in 2014 to 100% in 2019.   More than 6 lakh villages declared themselves ODF on 2nd October 2019 as a tribute to the 150th birth anniversary of Mahatma Gandhi.