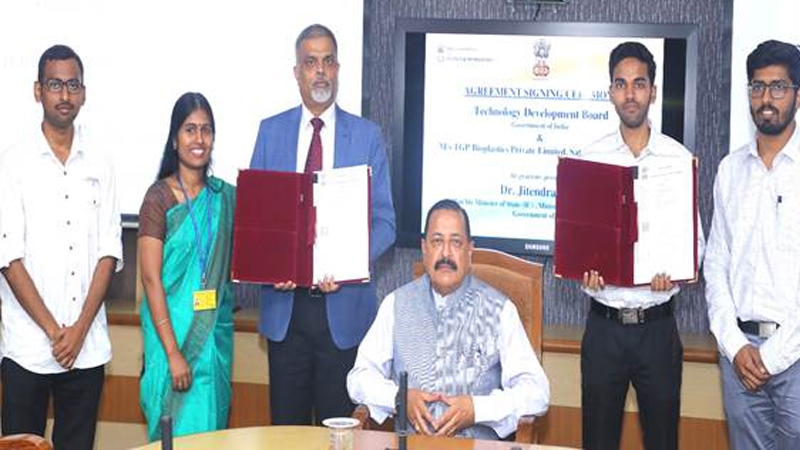 An MoU was signed between Technology Development Board, a statutory body under Department of Science & Technology and M/s TGP Bioplastics Private Limited, Satara, Maharashtra for manufacturing & commercialization of compostable plastic.

Dr Jitendra was apprised that the StartUp has come up with an alternative solution of Single Use Plastic (SUP) with the prototype of a compostable plastic material which breaks down as a compost in soil without affecting the environment. This unique project has received seed funding under NIDHI Prayas(DST), Niti Aayog and UNIDO for the prototype development.

Dr Jitendra Singh said, in lines with the clarion call given by Prime Minister Narendra Modi to phase out single use plastic items, India had banned manufacturing, importing, stocking, distribution, sale and use of identified single use plastic items, which have low utility and high littering potential, all across the country on July 1, 2022. The Minister said, the concept of compostable plastic will be scaled up with further government support for driving global action on plastic pollution.

Dr Jitendra Singh also informed that manufacturing & commercialization of compostable plastic by the TGP Bioplastics also gels well with the ongoing countrywide Coastal Clean Up Campaign launched by the Ministry of Earth Sciences from 5th July, 2022. He said, 75 days long campaign was launched to raise awareness about “Swachh Sagar, Surakshit Sagar” and will culminate on “International Coastal Clean-up Day” on 17th September 2022, when 75,000 people, students, civil society members and environment activists among others will be mobilized to achieve the target to remove 1,500 ton of garbage, mainly single use plastic from the sea coasts.

Dr Jitendra Singh said, the adverse impacts of littered single use plastic (SUP) items are globally recognized and the Government of India is taking resolute steps for mitigating pollution caused by littered Single Use Plastics. He said, even during the 5th session of United Nations Environment Assembly in March 2022, India engaged constructively with all member states to develop consensus on the resolution for driving global action on plastic pollution. The Government of India through the Central Pollution Control Board has been taking measures for awareness generation towards the pressing need of elimination of SUP and brought together entrepreneurs (startups, MSMEs, other industries), Central, State and Local Governments, regulatory bodies, citizens, R&D and academic institutions. Currently, very few degradable materials/composites are available in the market. Most of them cost more than Rs. 280/kg for the raw materials. The cheapest degradable polymer today is Polybutylene adipate terephthalate (PBAT) which is available at Rs. 280-300/kg, whereas conventional plastic raw materials cost around Rs. 90/kg. Hence, the market willingness for the degradable plastic is less. To solve this problem, the StartUp has developed a new composite material which is cheaper than the available compostable plastic (~Rs 180/kg), having comparable strength.

The composite is a unique blend of Thermoplastic-Starch (TPS)-glycerin with some chemical modifications that provides higher strength with low manufacturing cost. The granules prepared from this composite can be moulded into any shape and used as per the requirement, and it further breaks down into natural substances once thrown out. With funding from TDB, the company targets a production capacity of 880 MT per annum, with an aim to provide compostable packaging solutions in the context of the nation’s need on phasing out non-compostable SUP.

Rajesh Kumar Pathak, IP&TAFS, Secretary, TDB said that, “The Prime Minister has emphasised that plastic being non-bio-degradable, threatens to become a menace to humanity and is already having a deadly impact on our terrestrial, marine and aquatic ecosystem. Therefore, the idea to manufacture ‘Degradable Compostable Plastic’ is the ‘need of the hour’ technology. With TDB supporting M/s TGP Bioplastics, India is one step closer to provide indigenous alternate solution to ‘SUP’ and achieve India’s commitment of ‘Single Use Plastic Free’ nation.”