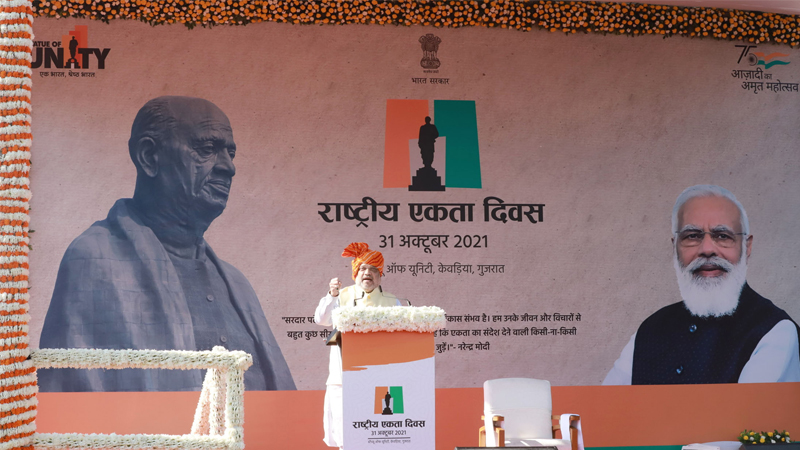 Union Minister of Home Affairs and Minister of Cooperation Shri Amit Shah attended the program organized at Kevadiya, Gujarat today as the Chief Guest on the occasion of National Unity Day on the birth anniversary of Sardar Vallabhbhai Patel. He paid floral tribute at the Sardar Patel Statue also known as the Statue of Unity to the country’s first Home Minister who was also known as the ‘Iron Man’. On this occasion, a video message of Prime Minister Shri Narendra Modi was broadcast. 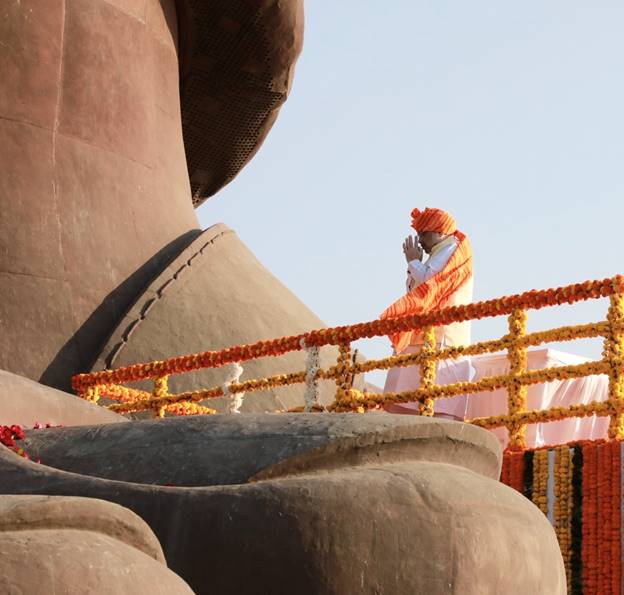 In his address on the occasion, Shri Amit Shah said we are taking forward the tradition started by the Prime Minister, Shri Narendra Modi, to celebrate the birthday of the country’s first Home Minister and ‘Iron Man’, Sardar Vallabhbhai Patel as National Unity Day. Today this National Unity Day also has a different significance because this year is the 75th year of our Independence. This National Unity Day, which comes during the festival to celebrate our 75th year of Independence, holds special significance for all of us because after independence, when the British had conspired to split the country, into India, Pakistan and more than 550 princely and there was a plan to divide the country, Sardar Sahab defeated those plans and he resolved to create a united India. 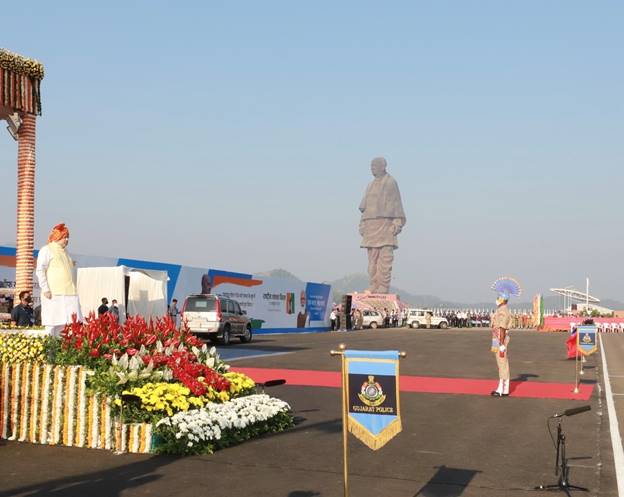 Shri Amit Shah said that it is the 75th year of our Independence of the country and the Prime Minister has decided to celebrate Azadi Ka Amrit Mahotsav. To celebrate Azadi Ka Amrit Mahotsav, on one hand we have many achievements, accomplishments, struggles and sacrifices since 15th August 1947 till the present and we have to resolve how to move forward with them. On the other hand, from 1857 to 1947, we fought for our independence, many battles for freedom were fought, many people sacrificed their lives, we have to pay tribute to all the freedom fighters, known or unknown, remembering them and taking inspiration from their spirit of sacrifice, the youth has to come forward in the building of the nation. He said that today it is the birth anniversary of Sardar Patel and I want to tell you that there can only one Sardar in centuries and that one Sardar keeps the flame lit for centuries. The inspiration given by Sardar Sahab has kept our country intact and his inspiration is keeping us united to take the country forward.

Union Home Minister said that Kevadiya is not only the name of a place but it has become a pilgrimage for national unity, integrity, patriotism and this  colossal statue of Sardar Sahab gives the message to the world that the future of India is bright and no one can damage our unity and integrity. 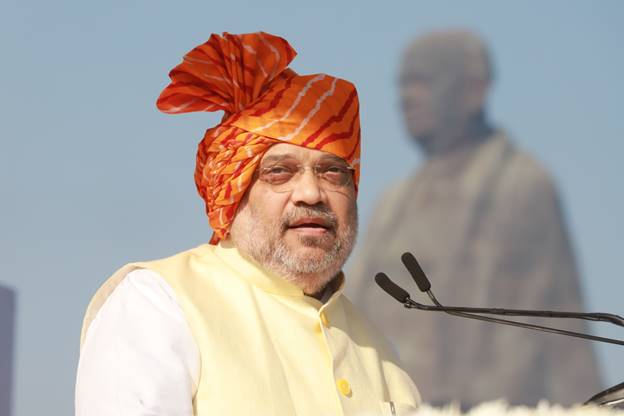 Shri Amit Shah said that Sardar Sahab’s life is an inspiration for all of us, especially children and youth. Sardar sahab was born into a poor farmer’s family and after completing education and when he was a barrister, he left his career and on the call of Gandhi ji, he joined the freedom struggle. When the country became independent, the British left India with many crisis. On one hand there was the crisis of partition, there was a question of creating a new system of governance, a new Constitution was to be written and the biggest crisis was the inclusion of more than 500 princely states in the Union of India. But Sardar Sahab completed this work despite his deteriorating health and Sardar Patel built a united India, defeating the intentions of those who thought that independent India would be divided in many parts. Sardar Sahab’s life, his personality always inspires and guides us all. It was Sardar Sahib who raised the voice of farmers in the Freedom Movement, laid the foundation of cooperatives and always led the practical side of the Freedom Movement. He never hesitated in expressing anything in an unambiguous manner. The unified form of Mother India that we are seeing today is only due to the actions of Sardar Sahab.

Union Minister of Home Affairs and Minister of Cooperation said that when all the princely states were to be merged with the Indian Union, then Sardar Sahab was not keeping well and meetings were being held continously. Along with
bringing together different princely states with India, there was another part of the country that did not go unnoticed, ‘Lakshadweep’, Sardar Patel sent the Indian Navy to ‘Lakshadweep’ at the right time and made it an integral part of India.

Shri Amit shah said that Sardar Sahab united India after Independence, but unfortunately attempts were made to forget Sardar Sahib. After Independence, his contribution never received due respect and place, and, neither he was honoured with the Bharat Ratna nor was he given due respect. But how long can clouds keep the sun covered? Things changed, the country changed and today Sardar Sahab has been honoured with the Bharat Ratna and the world’s tallest statue is before aall of us. This Statue of Unity is a message to the world that no one can break the unity of India, no one can disturb the integrity of India and no one can tamper with our
sovereignty. This 182 meter high Statue of Unity is almost twice that of the Statue of Liberty. When it was inaugurated by the Prime Minister and the then Chief Minister of Gujarat, Shri Narendra Modi, he had said at that time that the construction of the Statue of Unity will be in accordance with the way of working of Sardar Sahab. He spent his whole life in raising the voice of the farmers, many farmers’ Satyagraha movements for their rights against the British, and, due to the Bardoli Satyagraha, he received the title of Sardar. Shri Narendra Modi conceived the idea to build a colossal statue of Sardar Sahab by collecting iron from tools used by farmers across the country. The iron used in building the statue is iron made by melting the plow or any other agricultural tool of crores of farmers across the country and it is a true tribute to Sardar Sahab.

Union Home Minister said that there is a visitors’ gallery at a height of 135 metres where 200 people can enjoy a breathtaking view.  The construction of the Statue was completed in just 46 months. 70,000 metric tons of cement, 6 thousand metric tons of structural steel and 18,500 metric tons of reinforcement bars were used. The Union Home Minister and Minister of Cooperation said the Statue of Unity has been built at a beautiful location 3.5 kms from Sardar Sarovar Dam. I am giving this description for the youth of the country so that they visit this pilgrimage of unity of our country once, the consciousness and energy that they will receive here will inspire them to work for the country. He said within 30 months of its inauguration, 50 lakh people visited the statue. Today more than 15 thousand tourists visit daily and pay homage to Sardar Sahib. Shri Amit Shah said that this place is the result of vision of our Prime Minister and from here the generations to come shall take inspiration for maintaining the country’s unity.

Shri Amit Shah said when the new government came to power in 2014 under the leadership of Shri Narendra Modi, it was decided to celebrate 31st October as National Unity Day. He said this was done so that Sardar Patel’s struggle for the independence of the country and after that to keep the nation united continues to inspire our younger generation for years, and this statue which is made through the cooperation of the public is a symbol of this. Shri Shah said showing our unity, the Run for Unity also starts on the same day and everyone participates in the National Unity Run.

The Union Home Minister and Minister of Cooperation Minister said that year of Azadi Ka Amrit Mahotsav is important for all of us. We must be proud of our achievements, but at same time, resolve of where the country will be after 100 years has to be made by today’s generation. Shri Shah said that when 100 years of independence will be completed, the decision and resolution of where the country will be has to be taken by the people of our country, especially young generation. He said that if each one of us take a resolution and follow it throughout our life, then it will become a great way for the country to move forward. Shri Amit Shah said that Shri Narendra Modi has placed before us the resolve to create a vibrant, developed, prosperous, safe, cultured and educated India. To fulfill this resolve, we should celebrate the year of Azadi Ka Amrit Mahotsav as the year of resolution. We should all take our resolve and work for the sake of the country throughout our life. He said that imagine if a child takes a pledge that he will not waste a single grain of food, and a girl studying in class 12th decides that she will not violate traffic rules for the rest of her life. This will benefit the country. The Union Home Minister said that if 130 crore people take a resolution in this way, then 130 crore resolutions will definitely be fruitful to take the country forward.

The Union Home Minister and Minister of Cooperation Minister said that Shri Modi  has set a goal of a US$ 5 trillion economy, a safe India and an educated India through the New Education Policy, as well as goal of making our languages proud. He said today  is a very important day for all of us. Today, on National Unity Day, in the 75th year of our Independence, let us pledge that we will follow the path of Sardar Patel in our lives and make the nation strong and a country of Sardar Patel’s dreams.