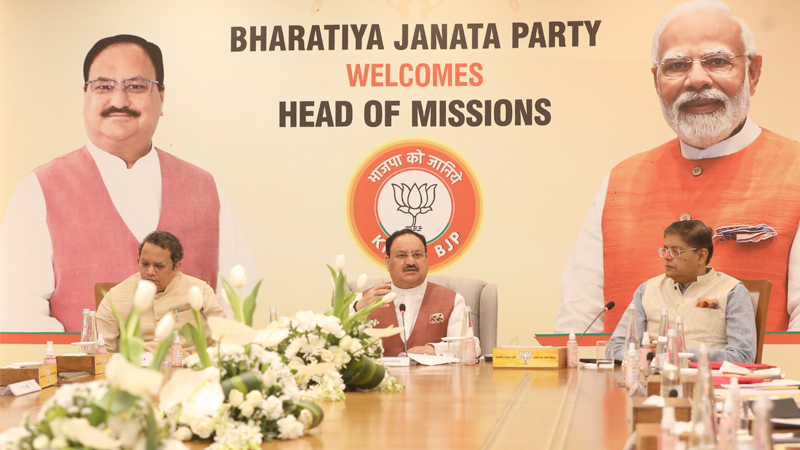 The Bharatiya Janata Party National President Shri Jagat Prakash Nadda today interacted with the Head of Missions to India of 13 countries including the European Union at the party headquarters. The interaction is part of the “Know BJP” campaign which was started today. Shri Nadda told the Heads of Missions about the Bharatiya Janata Party’s rich history,  the significance of the party organization and its expansion programme.

The idea behind the “Know BJP” campaign is to inform dignitaries about the party’s ideology and programmes, besides the journey of India’s development under Hon’ble Prime Minister Shri Narendra Modi ji in his eight years running the government.

The in-charge of the party’s foreign department Dr Vijay Chauthaiwale welcomed the Heads of the Missions in the BJP headquarters. In his welcome address the party’s national vice-president Shri Vijayant Jai Panda talked about the growth of the BJP and party’s ideology.

A documentary on the Bharatiya Janata Party’s journey since 1951 was also shown to the visiting dignitaries. This was followed by the Bharatiya Janata Party National President informing the visiting Heads of Missions about the party organization, BJP’s ideology and principles, its vision and its electoral struggles and successes. He also answered questions of the Heads of the Missions.

The “Head of Missions” to India were so inquisitive about the BJP that they spent 3 hours in the BJP headquarters while the interactive session went on for over 90 minutes. After the programme the Heads of the Missions also toured the BJP headquarters. During the interaction, several Heads of the Missions appreciated the pro poor policies and programmes of the Narendra Modi Government and their effective implementation. They also showed keen interest in knowing more and experiencing highly successful programmes and policies of the Narendra Modi Government being implemented at village and grassroots level like the DBT scheme and other pro poor schemes.