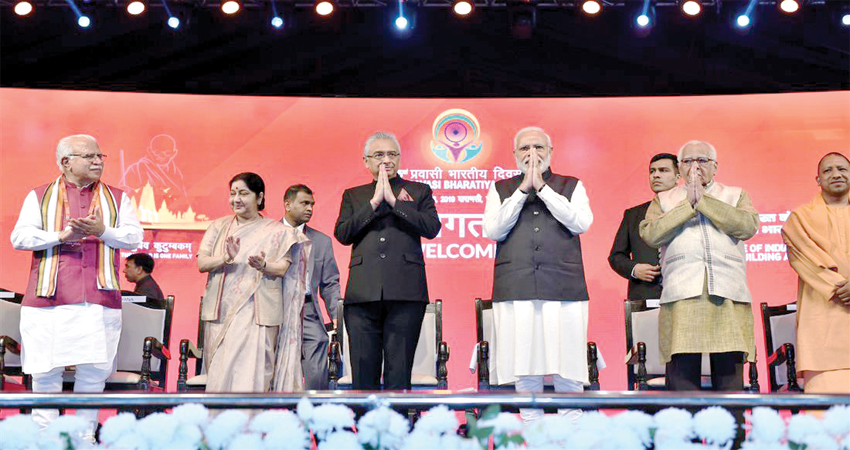 The Prime Minister Shri Narendra Modi inaugurated the plenary session of the 15th edition of Pravasi Bharatiya Diwas at Deendayal Hastkala Sankul in Varanasi on January 22, 2019.

In his address, Prime Minister Shri Narendra Modi said it is the love and affection of the diaspora for the land of their forefathers which has brought them to India. He called upon the NRI community to join hands for building a new India.
PM lauded the role of Indian diaspora in keeping alive the tradition of VasudhaivaKutumbakam. He said the NRIs are not only the Brand Ambassadors of India but also represent its strength, capabilities and characteristics. He urged the diaspora to participate in building a New India specially in research and innovation.

PM Shri Modi said that with its rapid progress, India is being seen on a high pedestal across the world and is in a position to lead the global community. International Solar Alliance is one such example. Mr. Modi added that local solution and global application is our mantra. He termed International Solar Alliance as a step in the direction of One World, One Sun, One Grid.
Prime Minister said that India is on course to become a global economic powerhouse. It has one of the largest start-up ecosystems and world’s largest healthcare scheme to its credit. We have moved on with great strides in Make in India. A bumper harvest production has been our major achievement.

PM lamented that due to lack of will power and proper policies of the previous Government, a large chunk of funds earmarked for them was not available for the Beneficiaries. However today, he said we have plugged the loopholes in the system with the help of technology. The loot of public money has been stopped and 85 percent of the lost money has been made available and transferred directly into the bank accounts of the beneficiaries. PM said that now Rs. 5,80000 crores has transferred directly into people’s accounts over the past four and a half years.PM narrated how 7 crore fake names have been struck off the list of beneficiaries, which is almost equal to the population of Britain, France and, Italy.

PM said these are some of the glimpses of changes ushered in by his Government which reflect the New Confidence of a New India.

Shri Modi said the diaspora is equally important in our resolve for a New India. He added that their safety is also our concern and cited how the Government took upon the challenge of evacuating more than 2 lakh Indians stranded in conflict zones.
Speaking about the welfare of Indians overseas, Shri Modi said passport and visa rules have been simplified and e visa had made it much easier for them to travel. All PravasiBharatiya are now being linked to Passport Sewa and efforts are in to issue chip based E passport.

PM Shri Modi said that a Pravasi Teerth DarshanYojana is being taken up. He urged overseas Indian to invite 5 non Indian families to visit India. PM also requested them to spread the values of Gandhi ji and Guru Nanak Dev ji and become a part of their anniversary celebrations. He said that we feel proud that global community joined us in compilation of Bapu’s favourite bhajan, Vaishnava jan.

PM complimented the role of the residents of Kashi in making PBD successful with their warmth and hospitality. PM said that ahead of upcoming School Board examinations, he will interact with the parents and students through NAMO App in ParikshapeCharcha – at 11am on 29th January, 2019.

Chief Guest of PBD -2019, Mauritius PM, PravindJugnauth invoked the memories of Indian diaspora and their connect with the land of their forefathers. Speaking in Hindi and English, he said such gatherings reinforce the identity of overseas Indians as the members of one family with shared history and culture. He said, if India is unique, Indianness is universal. The Mauritian PM told that an educated and self reliant diaspora can play a major role in nation building and the Diaspora connect can help multilateralism.

He enthralled the crowd with his Bhojpuri dialect and announced that Mauritius will organise the first International Bhojpuri festival.

In her welcome address, External Affairs Minister said India today feels proud under the dynamic leadership of PM Modi. She thanked Indian diaspora for their linkages with the motherland. Chief Minister of Uttar Pradesh, Yogi Adityanath said PBD and Kumbh in Uttar Pradesh are a reflection of Ek Bharat Shreshtha Bharat.

Closing ceremony of PBD will be held tomorrow on January 23, 2019 where President RamnathKovind will confer Pravasi Bharatiya Samman to select overseas Indians for their contributions.

After the Convention, on 24th January, the visiting diaspora delegates will visit Prayagraj for KumbhMela. They will then proceed to Delhi on 25th January and witness the Republic Day Parade at Rajpath, New Delhi.