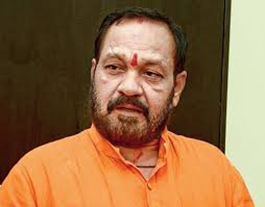 After the Panchayat election victory, Odisha BJP President Shri Basant Panda in a telephonic interview with Associate Editor of Kamal Sandesh, Ram Prasad Tripathy, said BJP’s victory could have been better had BJD not indulged in largescale violence and misuse of official machinery. He said the people want change and they want to get rid of the misrule of the BJD government. Excerpts;

BJP got a massive mandate in the recently completed Odisha Panchayat Elections. What factors have been responsible for this huge victory?

I think two vital factors are responsible for BJP’s victory. First, to strengthen the party base in the state, the BJP, under the guidance of our National President Shri Amit Shah Ji had done a membership drive very successfully and reached every polling booth in the state. Following the membership drive, the leaders and party Karyakartas have been working relentlessly to raise the local development issues concerning the poor and needy at the panchayat level and the poll results reflect that the people have reposed their faith in BJP’s agenda of development.

Secondly, from its inception the Union government under the leadership of Shri Narendra Modi Ji has been giving special emphasis for the development of Odisha. Modiji hiked the budgetary allocations several times for faster Railway connectivity in Odisha and approved several mega projects for the development of the state. Additionally, people liked the corruption free and development oriented governance of Modi Ji at the centre. Starting from welfare schemes for the poor, farmers, women, youth and backward, Modi ji took several historic decisions like OROP, surgical strike against Pakistan and demonetization. Here, people supported these decisions enthusiastically. Through this mandate, people have only reposed their faith in the leadership of the PM and approved all his policies.

What will be BJP’s next course of action? Do you think the same mood of the people will be reflected in the coming polls?

Now BJP will focus on the 2018 Urban Polls and the 2019 General Elections. We will focus on enhancing the organizational strength of the party and will also develop leadership qualities among our Karyakartas. We are confident that in both the Urban Polls and the 2019 General Elections, the party will emerge victorious. The people want change and they want to get rid of the Naveen Pattnaik Government’s misrule.

There are reports that the BJD workers allegedly indulged in largescale violence during the elections. What message do they want to give through these acts?

Owing to largescale defeats, the BJD workers on the ground appear frustrated. Hence, they murdered a prominent BJP worker Bullu Pradhan in CM Naveen Patnaik’s Assembly constituency, Hinjili near Berhampur city in Ganjam District. Apart from it six BJP workers have also been killed in the last 10 days and several are hospitalized after sustaining injuries. The BJD government wants to terrorize the opposition through these acts of violence. But they will not succeed. I think, BJP’s victory could have been better had BJD not indulged in largescale violence and misuse of official machinery.

Panchayat election results show that the Congress Party is almost wiped-out from the state. What is the future of Congress in Odisha? Do you foresee a possible BJD-Congress alliance to stop the BJP?

The people have rejected the BJD in the Panchayat elections. They got an alternative in the form of BJP. People have supported the BJP for its ideological consistency and development oriented policies. The verdict shows, the diminishing role of Congress in today’s political scenario. It is no more a force in the state. I cannot rule out the possibility of Congress and BJD joining hands. But, people of Odisha, through their mandate, have spoken it loud and clear. The days of BJD’s misrule are numbered and change is bound to happen in Odisha.