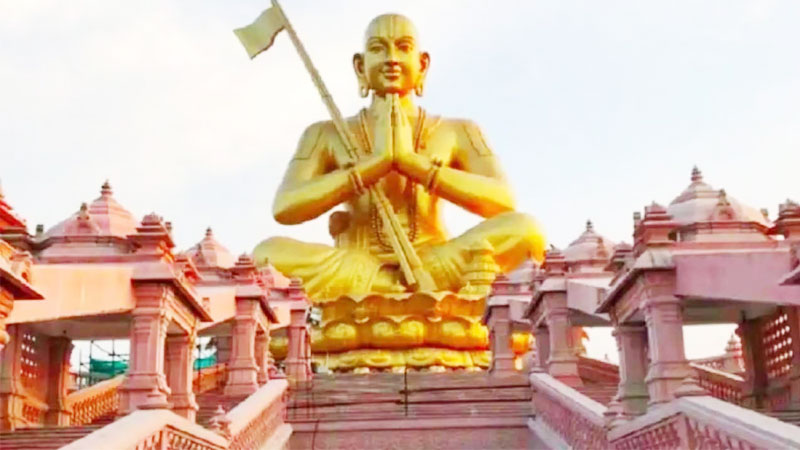 The Prime Minister, Shri Narendra Modi dedicated to the nation the ‘Statue of Equality’ in Hyderabad on February 5. The 216-feet tall Statue of Equality commemorates the 11th century Bhakti Saint Sri Ramanujacharya, who promoted the idea of equality in all aspects of living including faith, caste and creed. Governor of Telangana Smt Tamilisai Soundararajan, Union Minister Shri G. Kishan Reddy were among those present on the occasion.

Speaking on the occasion, the Prime Minister greeted everyone on the auspicious occasion of Basant Panchami and expressed happiness on dedication of the statue on such a pious occasion. He said “India is giving concrete shape to India’s human energy and inspirations through this grand statue of Jagadguru Sri Ramanujacharya. This statue of Sri Ramanujacharya is a symbol of his wisdom, detachment and ideals.”

The Prime Minister participated in the ‘Purnahuti’ of ‘Vishwaksena Ishti Yagya’. The Yagya is for fulfilment of resolutions and goals. The Prime Minister offered the ‘sankalpa’ of the Yagya for the ‘Amrit’ Sankalp of the country and dedicated the yagya to 130 crore countrymen.

The Prime Minister recalled the Indian tradition of its scholars that views knowledge above rebuttal and acceptance-rejection. “If we have ‘advait’ then we have ‘dvait’ too and we also have Sri Ramanujacharya’s ‘Vishishtadvaita’ that encompasses both ‘davit-advait’”, said the Prime Minister. He noted that along with the pinnacle of gyan in Sri Ramanujacharya, he is the founder of Bhakti Marg too.

On the one hand he is a saint of rich ‘Sanyaas’ tradition, he presents the importance of action in Gita Bhashya, on the other. The Prime Minister continued “In today’s world, when it comes to social reforms, progressivism, it is believed that reforms will take place away from the roots. But, when we see Ramanujacharya ji, we realize that there is no conflict between progressiveness and antiquity. It is not necessary to go far from your roots for reforms. Rather it is necessary that we connect with our real roots, become aware of our real power.”