The Prime Minister, Shri Narendra Modi on May 26 inaugurated India’s longest bridge – the 9.15 km long Dhola-Sadiya bridge, over the River Brahmaputra, in Assam.

The Prime Minister said infrastructure is extremely important for development, and the effort of the Union Government is to fulfil the dreams and wishes of the people. He said this bridge enhances connectivity between Assam and Arunachal Pradesh, and opens the door for economic development, on a big scale.

He said the eastern and north-eastern parts of the country have the greatest potential for economic development, and this bridge is just one element of the Union Government’s vision in this regard.

The Prime Minister said the bridge will bring about a positive change in the lives of the common people. He said the Union Government is placing great emphasis on the development of waterways as well. 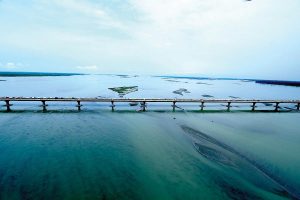 The Prime Minister said enhanced connectivity between the North-East and other parts of the country is a priority for the Union Government, and work has been greatly speeded up in this regard. He said that good connectivity in the North-East will also link the region with the economy of South-East Asia.

The Prime Minister also spoke of the immense tourism potential of the North-East. He said the Union Government has decided to name the Dhola-Sadiya bridge after the great musician, lyricist and poet, Bhupen Hazarika.

At present, all the transport between the two banks of the river are being carried out through water only. The bridge, when opened for the public, will cut down the travel time between Assam and Arunachal Pradesh by as much as four hours. Besides providing easy access to the people of Arunachal Pradesh and Assam with air and rail connectivity,the bridge has strategic importance too. Defence experts see the bridge as an attempt by India to beef up its defence requirements along the Sino-Indian border particularly in the Northeast.