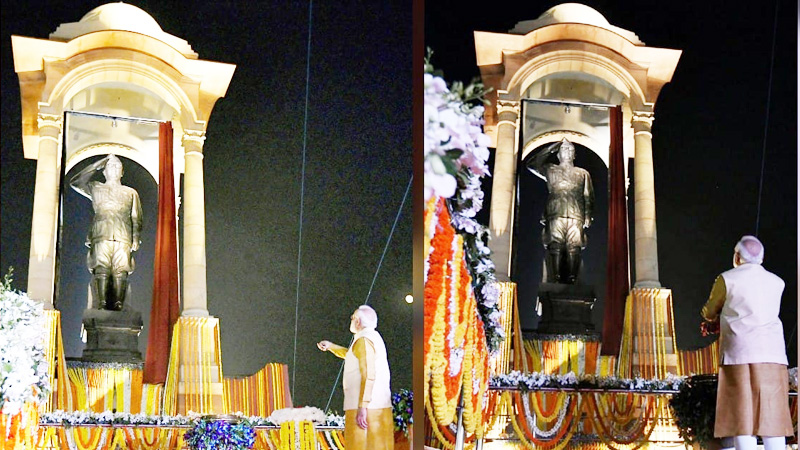 Prime Minister Shri Narendra Modi inaugurated the ‘Kartavya Path’ and also unveiled the statue of Netaji Subhas Chandra Bose at India Gate, New Delhi on 08 September, 2022. It symbolizes a shift from erstwhile ‘Rajpath’ being an icon of power, to ‘Kartavya Path’ being an example of public ownership and empowerment. These steps are in line with PM Shri Narendra Modi’s second ‘Panch Pran’ for New India in Amrit Kaal: ‘remove any trace of colonial mindset’.

Over the years, Rajpath and adjoining areas of the Central Vista Avenue had been witnessing pressure of increasing traffic of visitors, putting stress on its infrastructure. It lacked basic amenities like public toilets, drinking water, street furniture and adequate parking space. Further, there was inadequate signage, poor maintenance of water features and haphazard parking. Also, a need was felt to organise the Republic Day parade and other National events less disruptively with minimal restrictions on public movement. The redevelopment was initiated by the Prime Minister Shri Narendra Modi and has been done in a time bound manner bearing these concerns in mind while ensuring the integrity and continuity of architectural character.

The statue of Netaji Subhas Chandra Bose, which was unveiled by Prime Minister Shri Modi, is installed in the same place where a hologram statue of Netaji was unveiled earlier this year on Parakram Diwas, January 23 by him. The granite statue is a fitting tribute to the immense contribution of Netaji to our freedom struggle and would be a symbol of the country’s indebtedness to him. Crafted by Shri Arun Yogiraj, who was the main sculptor, the 28 feet tall statue has been carved from a monolithic granite stone and weighs 65 MT.

Rajpath, the symbol of slavery, has become a matter of history

Addressing the gathering, Prime Minister Shri Narendra Modi said that in the time of Azadi ka Amrit Mahotsav the nation felt a new inspiration and energy. “Today, we are filling the picture of tomorrow with new colours, leaving behind the past. Today, this new aura is visible everywhere, it is the aura of confidence of New India”, he said. “Kingsway i.e. Rajpath, the symbol of slavery, has become a matter of history from today and has been erased forever. Today, a new history has been created in the form of ‘Kartavya Path’. I congratulate all the countrymen for their freedom from yet another identity of slavery, in this Amrit Kaal of independence.”

The Prime Minister said that today a huge statue of our national hero Netaji Subhas Chandra Bose has also been installed near India Gate. “At the time of slavery, there was a statue of the representative of the British Raj. Today, the country has also brought to life a modern, strong India by establishing the statue of Netaji at the same place”, he added. Recalling the greatness of Netaji, Shri Modi said, “Subhas Chandra Bose was such a great man who was beyond the challenge of position and resources. His acceptance was such that the whole world considered him a leader. He had courage and self-respect. He had ideas, he had visions. He had leadership abilities and had policies.”

He said that no country should forget its glorious past. India’s glorious history is in every Indian’s blood and tradition. Netaji, the Prime Minister reminded, was proud of India’s heritage and at the same time, he wanted to make India modern. “If after independence India had followed the path of Subhash Babu, what heights would the country be at today! But unfortunately, this great hero of ours was forgotten after independence. His ideas, even the symbols associated with them, were ignored”, the Prime Minister lamented.

He recalled the visit to Netaji’s residence in Kolkata on the occasion of Netaji’s 125th birth anniversary and remembered the energy that he felt at that time. “It is our effort that Netaji’s energy should guide the country today. Netaji’s statue on the ‘Kartavya Path’  will become a medium for that’’, he said.

The Prime Minister said, “In the last eight years, we have taken many such decisions one after the other, which are imprinted with the ideals and dreams of Netaji. Netaji Subhash was the first head of Akhand Bharat, who freed Andaman before 1947 and hoisted the Tricolour. At that time he had imagined what it would be like to hoist the Tricolour at the Red Fort. I personally experienced this feeling, when I had the privilege of hoisting the Tricolour at the Red Fort on the occasion of 75 years of the Azad Hind government.” He also talked about the museum dedicated to Netaji and the Azad Hind Fauz in the Red Fort. He also remembered the Republic Day Parade in 2019 when a contingent of Azad Hind Fauz also marched, a long-awaited honour for the veterans. Similarly, the identity and their association in the Andaman Islands were also strengthened.

Kartavya Path, not just a road of bricks and stones

The Prime Minister emphasized that the Kartavya Path is not just a road of bricks and stones but a living example of India’s democratic past and all-time ideals. He reiterated that when the people of the country come here, the statue of Netaji and the National War Memorial will be a source of great inspiration and it will fill them with a sense of duty. The Prime Minister highlighted that on the contrary, the Rajpath was for the British Raj who considered the people of India as slaves. He stressed that the emotion and structure of the Rajpath were a symbol of slavery, but today with the change in architecture, its spirit is also transformed. This Kartavya Path stretching from the National War Memorial to Rashtrapati Bhawan will be vibrant with a sense of duty, he added.

He said that the development of such sites is also taking place with equal urgency. “Be it Sardar Patel’s Statue of Unity or a museum dedicated to tribal freedom fighters, PM Museum or Babasaheb Ambedkar Memorial, National War Memorial or National Police Memorial, these are examples of cultural infrastructure”, the Prime Minister added.

Kartavya Path will create a flow of duty in the country


In concluding his address, the Prime Minister called upon every citizen of the country and sent out an open invitation to come and see this newly constructed Kartavya Path in all its glory. “In its development, you will see the India of the future. The energy here will give you a new vision for our vast nation, a new belief”, the Prime Minister said.

Come and see this newly constructed
Kartavya Path in all its glory. In its
development, you will see the India
of the future

Shri Modi also mentioned the drone show based on the life of Netaji Subhash that will take place for the next three days. The Prime Minister also urged the citizens to visit and take pictures which can be uploaded on social media with the hashtag #KartavyaPath. “I know this entire area is the heartbeat of the people of Delhi, and a large number of people come with their families to spend time in the evening. The planning, designing and lighting of the Kartavya Path has also been done keeping this in mind” he said. “I believe that this inspiration of Kartavya Path will create a flow of duty in the country and this flow will take us to the fulfilment of the resolve of a new and developed India,” the Prime Minister said.

• Today India’s ideals and dimensions are its own.
• Today India’s resolve is its own and its goals are its own. Today, our paths are ours, our symbols are our own.
• Today, when the ‘Rajpath’ ceases to exist and has become a ‘Kartavya Path’.
• Today, when the statue of Netaji has replaced the mark of the statue of George V, then this is not the first example of the abandonment of slavery mentality.
• This is neither the beginning nor the end. It is a continuous journey of determination till the goal of freedom of mind and spirit is achieved.
• The PM also talked of significant changes like the change of the name of the PM Residence to ‘Lok Kalyan Marg’ in place of Racecourse road.
• Indian musical instruments in ceremonies of Independence Day and Beating the Retreat ceremony.
• He also referred to the change of ensign by the Indian Navy from colonial to the ensign of Chhatrapati Shivaji.
• Similarly, the National War memorial also represents the glory of the country, he added.
• The Prime Minister said that these changes are not confined to the symbols but have also infused the policies of the country too.
• Today the country has changed hundreds of laws that have been going on since the British era.
• The time and date of the Indian Budget, which was following the times of the British Parliament for so many decades, have also been changed.
• Through the National Education Policy, now the youth of the country are being liberated from the compulsion of foreign language.
• That means, both the thinking and the behavior of the countrymen are freed from the mentality of slavery.

PM Modi expresses special gratitude toward Shramiks & labourers
The Prime Minister expressed special gratitude toward the shramiks and the labourers not just for the physical contribution to the redevelopment of Kartavya Path but also for the height of their labour which is a living and breathing example of Kartavya toward the nation. Talking about his meeting with the Shramjeevis, the Prime Minister praised the dream of the nation’s glory that they carry in their hearts.
Shramjeevis of Central Vista will be PM’s special guests on Republic Day
The Shramjeevis of Central Vista and their families will be Prime Minister’s special guests on the next Republic Day Parade. The Prime Minister expressed happiness that today, there is a tradition of respect for Shram (labour) and Shramjeevi (workers) in the country. He emphasized that with sensitivity in policies, there is sensitivity in decisions and ‘Shramev Jayate’ is becoming a mantra for the nation. He recalled instances of interactions with workers in Kashi Vishwanath Dham, Vikrant, and Prayagraj Kumbh. Workers working on the new Parliament Building will get a place of honour in one of the galleries, he informed.