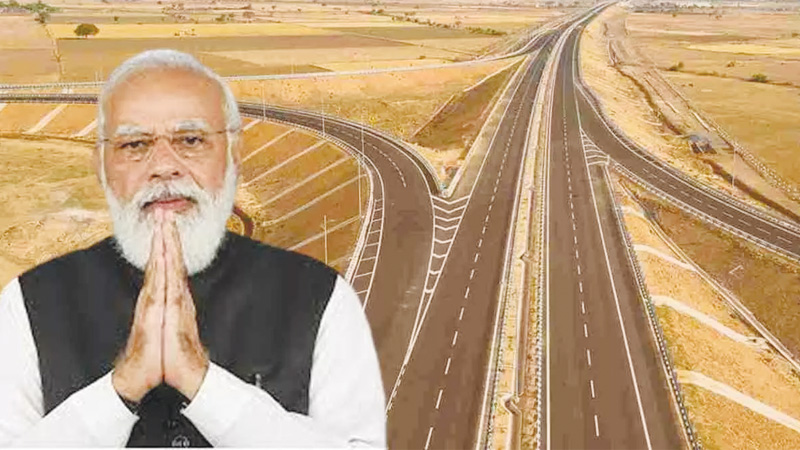 Prime Minister Shri Narendra Modi on July 16, 2022 inaugurated the 296-km-long Bundelkhand Expressway, which passes through seven districts of Uttar Pradesh and has been constructed at a cost of around Rs 14,850 crore. The PM laid the foundation stone for the construction of the expressway on February 29, 2020 and it was completed in about 28 months.

It extends from NH-35 at Gonda village near Bharatkoop in Chitrakoot district to near Kudrail village in Etawah district, where it merges with the Agra-Lucknow Expressway. The four-lane expressway, which can be later expanded into six lanes, passes through seven districts — Chitrakoot, Banda, Mahoba, Hamirpur, Jalaun, Auraiya and Etawah.

Besides improving connectivity in the region, the government expects the Bundelkhand Expressway to give a major boost to economic development and create thousands of jobs for the local people. Work on creating an industrial corridor in Banda and Jalaun districts, next to the Expressway has already been started.

Inaugurating the expressway, PM Shri Modi said the way UP is getting modernized under the double-engine government is really unprecedented. In UP, it took 40 years to complete the Saryu canal project, Gorakhpur fertilizer plant was closed for 30 years, it took 12 years to complete the Arjun Dam project, there was only a board outside the Amethi rifle factory and the Rae Bareli Rail Coach Factory was not manufacturing coaches but was only decorating and refurbishing the coaches. Today, the infrastructure work is being done so seriously in UP that it has left even developed states behind. Now the identity of UP is changing all over the country.