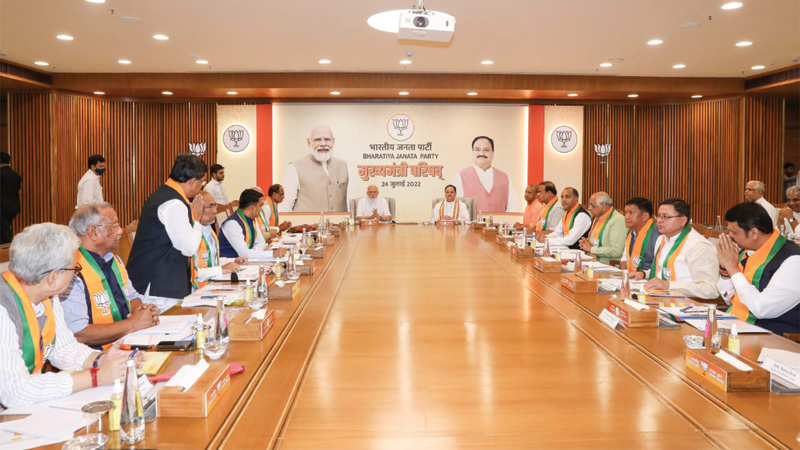 Prime Minister Shri Narendra Modi interacted with all 12 CMs and 8 Deputy CMs of BJP/NDA ruled States in BJP Chief Ministers Council Meeting at BJP Office in Delhi on 24 July, 2022. BJP National President Shri Jagat Prakash Nadda was also present in the meeting. The last such meeting was held in Varanasi in December 2021.

During the meeting, the Prime Minister emphasized the better implementation of some of the key schemes and initiatives of the government viz. Gati Shakti, Har Ghar Jal, Svamitva, DBT implementation, Government e-Marketplace, especially in the BJP ruled states. Talking about rural areas, he spoke about the significance of Gobardhan and the need to further popularize the initiative. He underlined the positive impact of nano-fertilizers on crop productivity and spoke about increasing their usage. He stressed the need to ensure saturation-level coverage of all key schemes and said that BJP-ruled states should take a lead towards this.

The PM put significant emphasis on the need to ensure ease of doing business. He spoke about several initiatives taken by the government towards this. He encouraged states to take steps towards further boosting the business environment in the country.

Shri Modi asked the CMs to ensure that their states accord due importance to sports and ensure the provision of the best facilities for encouraging participation and engagement of youth in large numbers. He emphasized that BJP-ruled states should aim to become known for their sporting culture. He also talked about the significance of all towns, villages and cities celebrating their foundation days. Shri Modi also said all CMs committed to strive to convert Azadi ka Amrit Kaal into an era of Antyodaya through Good Governance.

During the meeting, progress of various welfare schemes and development programs of the central government in these states were reviewed. Strategies to ensure last-mile delivery of welfare schemes, usage of e-governance systems to ensure greater accountability with zero pilferage, prioritizing outreach of schemes to remote areas and achieving 100% coverage of eligible beneficiaries were discussed.

The progress of the Amrit Sarovar Mission and preparation for the Har Ghar Tiranga campaign were reviewed.