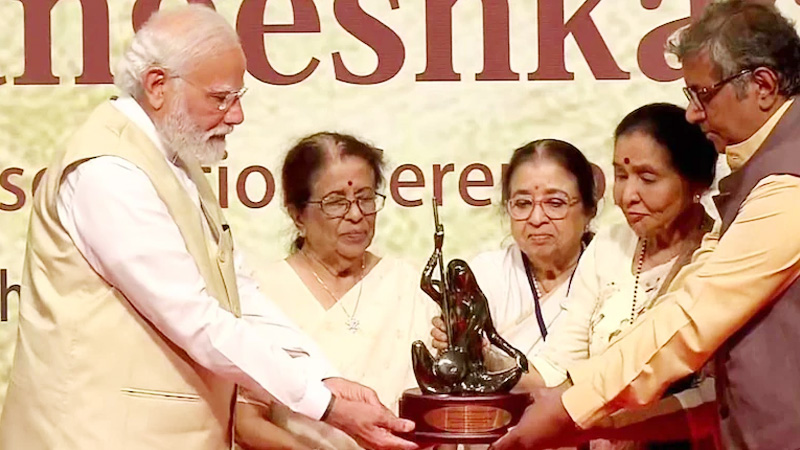 Prime Minister Shri Narendra Modi attended the Master Deenanath Mangeshkar Awards Ceremony in Mumbai on 24 April. On this occasion, Prime Minister was conferred 1st Lata Deenanath Mangeshkar Award. This award, which has been instituted in memory of Bharat Ratna Lata Mangeshkar, will be given every year exclusively to one individual for exemplary contribution towards nation building.
He said, “We are fortunate to have seen this capability and strength of music, in the form of Lata Didi”, he said. On a personal note, Shri Modi said “For me, Lata Didi was the ‘Sur Samragyi’ as well as my elder sister. What can be a greater privilege than to have received the love of a sister from Lata Didi, who has given the gift of love and emotion to generations”, he said.

PM Shri Modi said that he is generally not very comfortable with receiving awards but when the Mangeshkar Family calls with an award that carries the name of an elder sister like Lata Didi, then it becomes a symbol of her affection and love. “It is not simply possible for me to say no to this. I dedicate this award to all the countrymen. As Lata Didi belonged to people, this award given to me in her name also belongs to people”, the Prime Minister said. The Prime Minister narrated many personal anecdotes and elaborated upon the immense contribution of Lata Didi to the cultural world. “Lata ji’s physical journey was completed at a time when our country is celebrating Amrit Mahotsav of its freedom. She gave voice to India before independence, and the country’s journey of these 75 years was also associated with her voice”, said the Prime Minister.