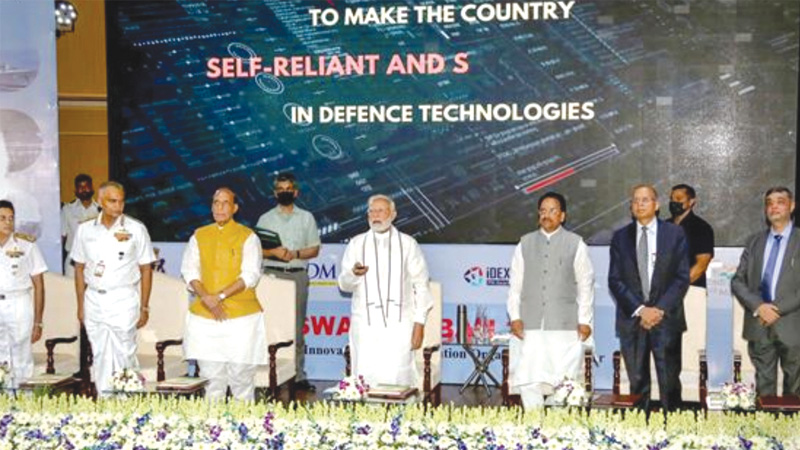 Will Boost The Usage Of Indigenous Technology In Indian Navy

Prime Minister Shri Narendra Modi on 18 July unveiled ‘SPRINT Challenges’, aimed at giving a boost to the usage of indigenous technology in Indian Navy, during Naval Innovation and Indigenisation Organisation (NIIO) seminar ‘Swavlamban’ in New Delhi on July 18, 2022. In a bid to achieve ‘Aatmanirbharta’ in defence and as part of ‘Azadi ka Amrit Mahotsav’, NIIO, in conjunction with the Defence Innovation Organisation (DIO), aims to induct at least 75 new indigenous technologies/products into the Indian Navy. This collaborative project is named SPRINT {Supporting Pole-Vaulting in R&D through Innovations for Defence Excellence (iDEX), NIIO and Technology Development Acceleration Cell (TDAC)}.

Addressing the gathering, the Prime Minister said the goal of self-reliance in the Indian defence forces is very important for India of the 21st century. Organizing the first ‘Swavlamban’ (self-reliance) seminar for a self-reliant Navy is an important step in this direction. The Prime Minister said that the resolution of creating 75 indigenous technologies in this period of making new resolutions for India is inspiring in itself and he expressed confidence that it will be fulfilled very soon. “We have to work to continuously increase the number of indigenous technologies. Your goal should be that when India celebrates 100 years of its independence, at that time our Navy should be at an unprecedented height”, he added.

Referring to the importance of oceans and coasts in India’s economy, Shri Narendra Modi said, the role of the Indian Navy is continuously increasing and therefore its self-reliance is of critical importance.

Shri Narendra Modi stressed the self-reliant defence system is critical for the economy and also from the strategic point of view. He said the country has worked in mission mode to reduce this dependence after 2014. He remarked that the Government has given new strength to our public sector defence companies by organising them in different sectors. Today, we are making sure that we connect our premier institutions like IITs with defence research and innovation.