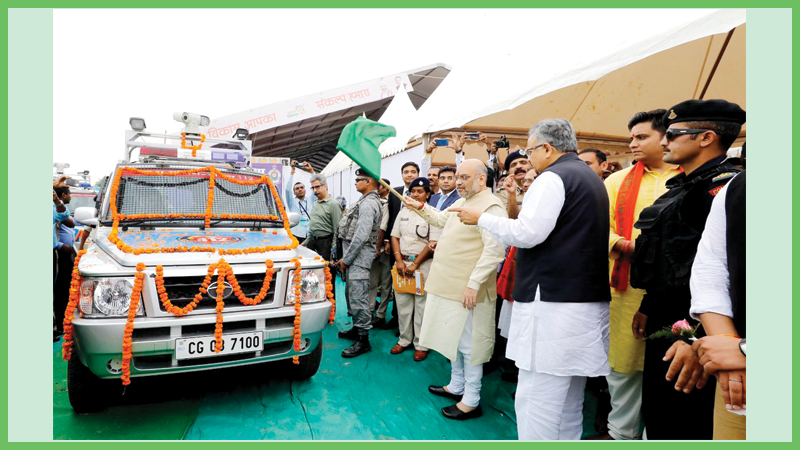 BJP National President Shri Amit Shah on 05th September 2018 said instead of demanding an account of work done by Narendra Modi government in the last four years, the Congress President should answer why development did not reach the masses during the “six-decade rule of his family”.

Shri Shah was speaking after flagging off the second phase of ‘Atal Vikas Yatra’ in Chhattisgarh alongwith Chief Minister Dr. Raman Singh to reach out to people from Kurubhat village near Dongargarh in Rajnandgaon district. The yatra was renamed in the memory of former prime minister Shri Atal Bihari Vajpayee.

Addressing a rally at the Pragyagiri ground in Kurubhat village, Shri Amit Shah said Rahul Gandhi had no right to question the Modi government and slammed the performance of previous Congress governments.

“His Congress government was in power for 60 years but why electricity did not reach villages? Why farmers did not get better MSP? Why benefits of other welfare schemes did not reach to the masses? People of the country want to know the account of 60 years of the Congress rule from you,” the BJP National President asked. We don’t need to answer you. You don’t have the right to ask this question, he said.

Before the launch of the mass outreach campaign, Shri Shah and Dr.Singh paid obeisance at Maa Bamleshwari temple in Dongargarh.

SKY, launched in July this year is expected to benefit 45 lakh women belonging to poor families and five lakh college students who will be given smartphones. Shri Shah said, “I was listening to speech of ‘Shehzada’ of the Congress. He was asking Modiji’s account of the work done during the last four years.

Why was he even asking this question?” “The people of the country wanted to know from Rahul the account of work done during your four-generation rule,” he said.

Referring to the alleged coal allocation scam that had surfaced under the previous Congress-led UPA government, the BJP National President said the Congress is a “coal mine thief which committed irregularities in the coal block allocations”.

“Rahul baba during his recent visit to Chhattisgarh, was asking why the Raman Singh government did not purchase mobile phones from BHEL under the SKY scheme. BHEL does not manufacture phones and Rahul does not even know that and he is asking for the hisab,” he said.

Recalling the contribution of Vajpayee in the formation of Chhattisgarh, Shri Amit Shah said, “Atal ji had founded Chhattisgarh state and Dr. Raman Singh has developed it as per his dreams”.