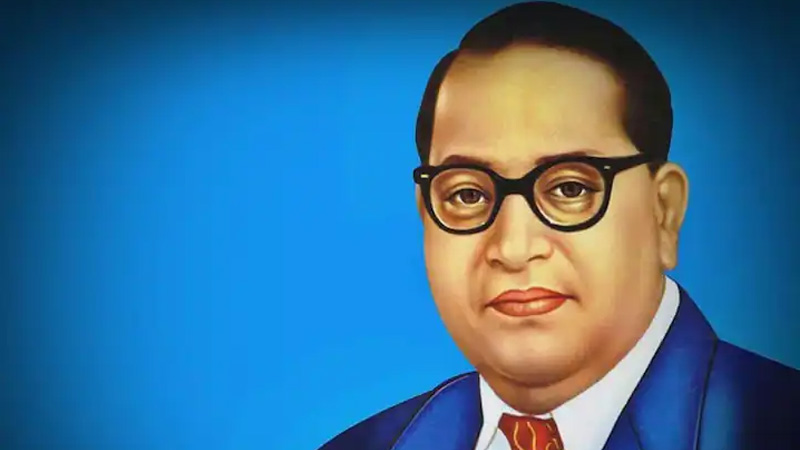 Special On The Jayanti Of Babasaheb Dr. B.R. Ambedkar : 14 April

Many great men from ancient to modern world had dedicated their lives for the welfare of the society through their actions, reforms, movements and service. One such multi-splendid personality in modern world is Babasaheb Dr. B.R.Ambedkar, who rose from the margins and achieved great accomplishments through his intellectual knowledge in creating a better world. He relentlessly fought to assert the human rights of the marginalised, and endeavoured to build a social order based on justice and equal dignity of every individual. As chairman of the Constitution Drafting Committee, Dr. Ambedkar had a meticulous approach towards making India a just society and strengthening national integrity and sovereignty. He,

unfortunately for a variety of reasons, has been portrayed only as the ‘messiah of Dalits’. Successive governments both at Central and State level have failed either inadvertently or knowingly to educate people about his real contribution to the country.One needs to acknowledge that he was the first political leader in modern India with deep knowledge in economics. He had a PhD degree from two foreign universities, knew 12 languages, a jurist, prolific writer, administrator etc. which made him the most qualified Indian during his times.

The dissension of congress over various issues raised by Dr. Ambedkar never let them allow him get his actual place in the history of India. Though Dr. Ambedkar was made the first law minister, the then PM Pt. Nehru never considered him to be an important player in the contemporary politics. Before independence also in his book, The Discovery of India, Pt. Nehru has not mentioned about Dr. Ambedkar for even once. Besides, the differences between Mahatma Gandhi and Dr. Ambedkar are quite open now but we hardly get to read about the dialogues and disagreements between Pt. Nehru and Dr. Ambedkar. Babasaheb was reluctant to accept Nehru’s advocacy for special status to J&K. He opposed Art 370 and said he can’t compromise with security of India at any cost by incorporating Art 370. While people like Sardar Patel and Dr Ambedkar fought for social integration of the country, PM Modi is striving for both economic and social integration of the country.

In the words of PM Shri Narendra Modi, ‘Babasaheb represented a combination of Samata (equality) and Mamata (motherly love), which brought about Samrasta (social harmony).’ Dr. Ambedkar’s thinking and legacy are reflected in the pro-people, pro-poor welfare policies and programmes of the Prime Minister Shri Narendra Modi-led government. The central government is leaving no stone unturned to improve the lives of citizens through their social, economic and political empowerment. The development of Panchteerth — Janam Bhumi (Mhow), Shiksha Bhumi (London), Chaitya Bhumi (Mumbai), Diksha Bhumi (Nagpur), Mahaparinirvan Bhumi (Delhi) — are steps towards ensuring an appropriate legacy for Dr. Ambedkar, the nationalist reformer. In August 2019, the Modi government took the bold decision to correct the historical wrong by scraping Article 370, fulfilling the vison of Dr Ambedkar. Now the people of erstwhile Jammu & Kashmir are experiencing a new dawn of vision-oriented development. It has paved the way for the implementation of nine constitutional amendments and 106 other laws in J&K. Inspired by Dr. Ambedkar, the current government has taken steps to improve the quality of life of workers. For example, the Pradhan Mantri Shram Yogi Maan-Dhan Yojna was launched in February 2019 to ensure protection of unorganised workers in their old age. Through technological interventions like Shram Suvidha Portal, transparency and accountability are ensured in the enforcement of labour law. The government is working to simplify, amalgamate and rationalise the provisions of the existing central labour laws into four labour codes — Labour Code on Wages, on Industrial Relations, on Social Security & Welfare and on Occupational Safety, Health & Working Conditions.

Under Prime Minister Shri Narendra Modi led NDA government, the philosophy of uplifting of the poorest of the poor or ‘Antyodaya’ has found a new ground and is aimed at making a billion strong country, our human capital the biggest asset. A well articulated and targeted approach has been conceptualized by the present government for alleviation of the vulnerable and poor section of the society.
On the one hand, the government is empowering the poor by providing the primary needs such as food via Public Distribution System, affordable housing, health care facilities and insurance, while on the other, is giving more power through education, information, coaching and counselling, and amplify their possibility to get or create a job or business through micro credit or Mudra loans. A significant progress was made in the last seven years to reinstate transparency and remove discriminatory practices so that facilities reach everywhere person.

Inspired by Dr. Ambedkar, the current government has taken steps to improve the quality of life of workers. For example, the Pradhan Mantri Shram Yogi Maan-Dhan Yojna was launched in February 2019 to ensure protection of unorganised workers in their old age

Launched on August 28, 2014, PM Jan Dhan Yojna revolves around the provision of accessible and flexible financial services to the poor. This initiative has been a game-changer, serving as the foundation for many poverty alleviation initiatives, benefitting crores of people. Till today, 44.88 crores bank accounts have been opened with almost Rs. 162,718.42 crore balance in beneficiary accounts.
Pradhan Mantri Ujjwala Yojana was launched in 2016 to protect our mothers and sisters from the hazardous smoke they had to encounter while cooking food. Till now 10,00,00,000 LPG connections have been released under this Yojana The PM-KISAN Scheme was introduced to provide financial support to farmers. Under this scheme, the government offers Rs 6,000 every year in three instalments of Rs 2,000 each to over 14.5 crore farmers across India. The funds are transferred directly to the bank accounts of the farmers. To date, the Central government has transferred over Rs 20,000 crore directly into the bank accounts of more than 9.5 crore eligible farmers in the country.

Pradhan Mantri Awas Yojana is an initiative of the visionary BJP government to establish housing facilities for slum dwellers. As on 20 March 2020 ,a total of 1.15 crore houses have been sanctioned under Pradhan Mantri Awas Yojana, of which 94.79 lakhs houses have been grounded and around 56.2 lakhs have been completed.
Prime Minister Street Venders Aathma Nirbhar Nidhi( PM SVANIDHI) yojna is to empower Street vendors by not only extending loans to them but also for their holistic development and economic upliftment. The scheme intends to facilitate collateral free working capital loans of up to Rs.10,000 of one year tenure to help resume their businesses in the urban areas including surrounding perry- urban /rural areas. A total of 2 million applications have been received under this scheme of which 752191 have been sanctioned and 218751 loans have already been disbursed. Ayushmann Bharat is the largest government funded healthcare programme in the world with over 50 crore beneficiaries. So far 1,36,4880 free treatments have been done under the scheme. Pradhan Mantri Fasal Bimah Yojana is the flagship scheme of the government of India for agricultural insurance in line with the one nation one scheme theme it aims at providing insurance coverage and financial support to the farmers in the event of failure of crops of the notified crops a result of natural calamity, pests and diseases. Over 10 crore farmers have registered under this yojna .

For their economic empowerment of Scheduled Castes, ASIIM (Ambedkar Social Innovation & Incubation Mission) was set up to promote innovation among SC students studying in higher educational institutions. Under this mission, 1000 SC youths were allotted INR 30 Lakhs and a period of three years to translate their start-up ideas into commercial ventures. Similarly, a Venture Capital Fund aimed at providing concessional finance to SC entrepreneurs was established. It has already made disbursement to 89 companies amounting to INR 278.77 crores. For supporting their education, Post Matric Scholarship for SC students was brought in that already has INR 59000 crores sanctioned till 2025-26.

The recent efforts of the government are in line with the two mantras of the Constitution espoused by Babasaheb Ambedkar – ‘Dignity for Indians’ and ‘unity for India’. While Congress ruled the country for almost six decades, the development of basic services (like electricity, water, bank accounts, toilets, home, etc.) was far from what was required, and what was in fact achievable. Under the Swachh Bharat Mission – Gramin scheme, 9.16 crore toilets have been constructed till February 5, 2019. It has increased the sanitation coverage in the rural areas of the country to 98%, which was hardly 38.7% on October 2, 2014. The Ministry of Road Transport & Highways (MoRTH) has also shown what can be possible and achieved milestones after milestones in recent years. They constructed 12,205.25 km of National

This government in the last few years has been empowering the poor by providing the primary needs such as food via Public Distribution System, affordable housing, health care facilities, and insurance

Highways in 2020-21, with a construction of 34 kilometres per day. It was almost three times the rate of construction of highways of about 12 km per day in 2014-15.
This government in the last few years has been empowering the poor by providing the primary needs such as food via Public Distribution System, affordable housing, health care facilities, and insurance. Under the DBT system, this government has disbursed a whopping INR 8.22 lakh crore (since 2014), which is nearly 60% of the welfare and subsidies budget of the Union government, directly to the bank accounts of beneficiaries. It was extremely helpful during the lockdown due to COVID-19 and provided for the basic needs of millions.

These overview of all the schemes provides an insight into Prime Minister Shri Narendra Modi’s historic mission to transform India into a global power- Vishwa Guru- in the 21st-century. All developmental initiatives are transformative, they are comprehensive and integral and aim at laying a new foundation for a ‘New India’. We always believed that India is destined to rise once more as a global power , our efforts in governance in the last eight years has been to realise that vision. It is faith in the vision of ‘Sabka Saath , Sabka Vikas, Sabka Vishwas’ which has led us to ensure that the fruits of growth of opportunity, of possibilities and of development reach all equally.”