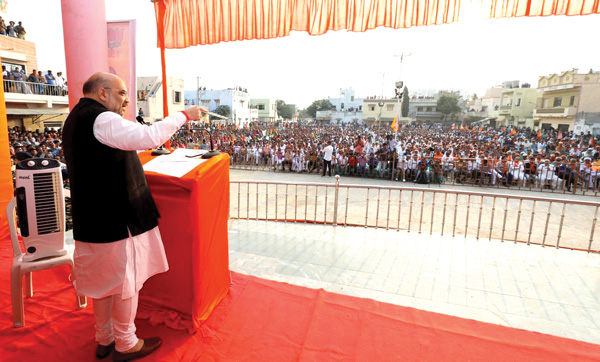 BJP National President Shri Amit Shah stepped up his attack on the Congress over the Ram Mandir issue for it’s shameful posturing. Addressing an election rally at Navsari, Gujarat on 06 December, 2017 Shri Shah said, “Now that Sunni Waqf Board has said that they don’t agree with what Kapil Sibal said in court, it is certain that Sibal spoke in his personal capacity as a Congress leader, with the blessings of their high command. Shameful posturing by Congress on Ram Temple issue!” he said.
Noteworthy, the Sunni Waq Board’s Haji Mehboob has said that Sibal had said that the final hearing in the Ayodhya case should be held after the General Elections in 2019. But distancing itself from its lawyer Kapil Sibal’s statement in the Supreme Court he said, the body wants an early solution to the Ayodhya issue.

He said that the Gujarat assembly election is not about who will become the CM or a fight between two parties but between Congress’ Jativaad -Vanshvaad and Narendra Modi’s Vikasvaad. He said the Congress-led UPA government did nothing for Gujarat and Rahul Gandhi thinks that Gujarat is a tourist spot as he is visiting the state very often, he added.
Shri Shah further asked Congress vice president Rahul Gandhi to make his stand clear on Rohingya Muslim refugees as well as the issue of autonomy for Jammu and Kashmir.

Addressing a rally in poll-bound Gujarat, he said Mr Gandhi and the Congress should state what the situation in Kashmir was when the party was in power.

Terrorists killed our soldiers and people with impunity during their rule,” Shri Shah said. The BJP government, on the other hand, carried out a surgical strike against terrorists. “We conducted a surgical strike. Our soldiers entered Pakistani territory, killed them and came back,” he said.

The BJP President said, “Rahul Gandhi should make his stand clear whether he supports Chidambaram’s demand for autonomy for Kashmir. People of Gujarat should ask him when he comes here next,” he said.