A year has passed since the thumping victory of Bharatiya Janata Party on May 23, 2019, with a bigger mandate than it got in 2014. I’ve keenly observed and written about the work done by the Modi government over the past 6 years and have no hesitation in saying that the fundamental changes brought in will have a lasting, positive effect.

Since the beginning of this term, the government is geared towards reform-based policies and decisions awaited by the populace for decades. If one reflects back on this term, it can undoubtedly be compared to a roller-coaster of a year filled with surprises. With the passage of the historic Triple Talaq Bill in the Indian Parliament, the promise made to Muslim women to end this discriminatory practice (which is even banned in major Islamic nations) was fulfilled. This also enlightened further discussions for a Uniform Civil Code in the country.

The big bang reform came in the decision to abrogate Article 370 of the Indian Constitution, the sole Article with the word “Temporary” attached to it. The irony being, this temporary lasted for about 70 years, curtailing basic human rights, access to justice, opportunities, and promoted terrorism and enhanced the illicit wealth of a select few families in the Valley.

The mandate of the people was hugely in favour of Modi Sarkaar as they got on the streets to celebrate this abrogation, as well as the process to give rights to people of Ladakh by declaring it a separate Union Territory. Much recently, the domicile rules were rejigged to give a ray of hope to many SC communities and refugees, who gave their blood and sweat but awaited basic rights.

Fast-tracking Citizenship for persecuted Minorities of three neighbouring countries, namely Bangladesh, Afghanistan and Pakistan was a turning point of this Government’s grit to deliver what it promises. Again, this was a long pending promise to the nation, to bind it together. Though some sections tried to foster outrage by twisting facts, portraying half-baked ‘theories’ and fear-mongering, it was widely welcomed by the people who reposed their faith in this government.

After the Supreme Court verdict on Ayodhya, the government proactively constituted the Ram Janambhoomi Trust to fulfil the grand dream of chores of Indians. This sheer determination to deliver what you promise epitomises the present government, as it formed a significant point of the election manifesto.

After a period of unbridled success, the biggest challenge that confronted this government came in the form of a pandemic, which is slowing but becoming a part of our lives now. Just when countries with high economic potential gave up their fight against the disease due to rising cases and mortality rates, the farsightedness and zeal of PM Shri Narendra Modi mixed with his power of exhortation were at the finest display.

Averting the calamity was his focus with timely graded and preemptive measures, starting January. The government stopped incoming flights from China, the source of the Corona virus that originated in Wuhan, and ensured that it doesn’t spread as rapidly with the Janata Curfews and Lockdowns. This was crucial to nip it in the bud and avoid a major catastrophe. The result is evident; the Health Ministry reported that almost 216 districts are Corona free, and 60,490 patients recovered taking the recovery rate up to 41.61% as I write this. 80% of the cases are restricted to five cities. Several experts and the Government did a statistical analysis of lockdown impact and a collective analysis deduced COVID-19 cases averted to be in the range of 14-29 lakh and lives saved in the range of 37,000-78,000. A demonstration of democratic values is seen in this management.

The big bang economic stimulus of INR 20,00,000 Crore, almost 10% of the GDP is a game-changer when most opposition leaders demanded 5%-6% of fiscal support. PM’s emphasis on self-reliance, aimed at igniting national consciousness to be vocal for the local is the new mantra of life now with the grand ‘Atmanirbhar Abhiyaan.’

Successive announcements by the Finance Minister laid the foundation of this Abhiyaan, a total of five tranches of this package relying on 5 pillars, the big ones being economy, infrastructure and demand. After the 1991 liberalisation reforms, India hasn’t witnessed such avant-garde measures. International players praised the Indian Government’s economic package lauding it as the right dose to fix the economic downturn. Be it rural or urban, immediate cash transfers to the bottom of the pyramid, or new policies to help MSME’s and big industries, a street vendor or a farmer all sections have been taken care of under this package. 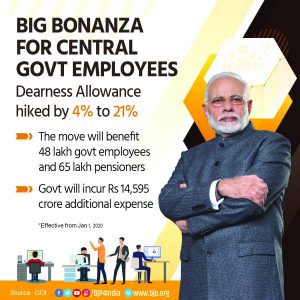 Special attention has been paid to healthcare workers insurance, healthcare supplies and production of PPE kits, testing kits etc. Naysayers might not credit it for obvious reasons but, deep down even they know that if anyone had the political resolve to save India from a pandemic and an economic slowdown, it was Shri Narendra Modi and his able government.

Nevertheless, a big change awaits the world in coming years, the pandemic has undoubtedly affected the economic activity, but this government will not stop till we revive the economy and reach new heights. Equally, the Prime Minister’s leadership has led India to achieve much goodwill in the worlds, particularly during this pandemic. That will surely only grow in the coming years, and be a key component of India’s future trajectory. In the meantime, each and every supporter plays a pivotal role in ensuring the success of a New India, which is in the process of transforming the destinies of 130 crore Indians.

(The writer is National Vice President and Spokesperson of BJP)