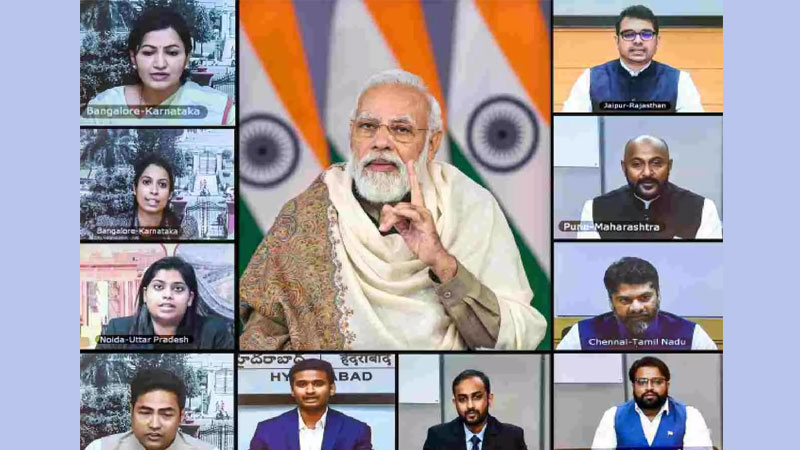 The country will celebrate January 16 as National Startup Day, Prime Minister Shri Narendra Modi told a virtual gathering of over 150 entrepreneurs on January 15 as he termed startups as the “ backbone “ of new India and the engine that will power the nation’s economic growth in the run up to the 100 th year of Independence.
The current decade, Shri Modi said, is being referred to as the “techade” of India and his government will usher in massive changes to strengthen innovation, entrepreneurship and the startup ecosystem.

“The first is to liberate entrepreneurship and innovation from the web of government processes, bureaucratic silos. Second, is creating an institutional mechanism to promote innovation. And third, is handholding young innovators and young enterprises,” the Prime Minister said at the event, a part of the Azadi ka Amrit Mahotsav.

Pointing out that the number of startups in India had grown to over 60,000 from less than 500 just five years ago, he said these ventures are working across nearly 55 industry sectors and are “changing the rules of the game.”“I believe the golden era of India’s startups is starting now,” the Prime Minister said as the country is “rapidly moving towards hitting a century of unicorns,” which are the hallmark of self-reliant and self-confident India.

Meanwhile, the country’s ranking in the GlobalInnovation Index has moved to 46 from 81.

Unicorns and startups are messengers of India’s diversity, a keystone of the country’s global identity, according to Modi who exhorted startup founders to not “keep your dreams local, make them global. Remember this mantra- let’s Innovate for India, innovate from India.”

Founders provide inputs Startups invited to the gathering were divided into six working groups, with two founders from each cohort, making presentations to the PM on the chosen themes – Growing from Roots; Nudging the DNA; From Local to Global; Technology of Future; Building Champions in Manufacturing; and Sustainable Development.

Seeking faster approval on policy matters from the government topped the day’s agenda, according to entrepreneurs who participated in the interactive session. In addition, the startups shared ideas and provided inputs on a range of issues from building a robust data collection mechanism for the agriculture sector and making India a preferred agri-business hub to boosting healthcare through use of technology, tackling issues of mental health and promoting travel and tourism through innovations like virtual tours.

The event also marks the sixth anniversary of the launch of the ‘Startup India’ initiative. Expanding reach of startups Pointing out that there is at least “one startup in each of the 625 districts of the country and more than half of the startups are from tier 2 and tier 3 cities, “the PM said these ventures are “converting ideas from ordinary poor families into businesses and lakhs of young Indians are (gaining employment.” In July 2021, the department for promotion of industry and internal trade (DPIIT) had recognised 52,732 Indian startups.