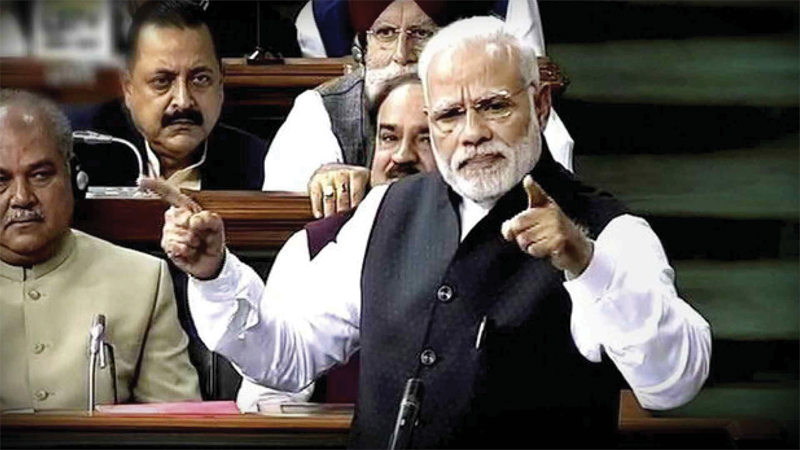 Speaking in the motion of thanks on the President’s address Prime Minister Shri Narendra Modi on February 7, 2019 said that India galloped from number 11 to number 06 in terms of rating on economic front and urged members of parliament to motivate maximum number of poor people to take the benefit of Ayushman Bharat Scheme. Here, we are publishing the synopsis of the speech for our esteemed readers.

I am in attendance here to thank the hon. President for his Address. Many hon. Members have put forward their views. When we talk of new India, this carries with it an inherent hope and confidence. It is also true that only those who are laced with hope and are brimming with confidence can talk with conviction and clarity. It is hope and forward looking approach that can lead the nation to the path of progress even when faced with unfavourable condition. Over the last four and a half years, India has galloped from number 11 to number 06 in terms of rating on economic front. Foreign Direct Investment has also registered a quantum leap vis-a-vis the previous regime. The power of Make in India is establishing new bench marks in manufacturing sector. Today India is the second largest producer of steel and manufacturer of mobile phones in the world. India is the 4th largest manufacturer of automobiles in the world. India is making record production of vegetables and milk today.

The cheapest internet data and its maximum consumption is in India. Start up eco system has firmly established its roots. Aviation sector is making progress at the fastest speed. It is alleged that the Government is undermining the institutions. To my mind, this deserves serious consideration. The imposition of emergency, humiliation of Defence Forces, denigrating the Election Commission and threatening the judiciary etc are ascribed and attributed to the Congress Party. The Congress Party had once termed Planning Commission as ‘Bunch of Jokers’. It was during the Congress regime that there had been misuse of Article 356 almost 100 times. Not just that, the Congress leaders tore up the Cabinet Note in a Press Conference.

During the last 55 months, our Government has carried out unprecedented work in the areas of cleanliness, construction of toilets, distribution of gas connection, opening of bank accounts for the poor, rural electrification and many more. A slew of initiatives undertaken in the right earnest has sent a clear and unequivocal message across the board that a Government in majority is able to take concrete decision. Thanks to implementation of Direct Benefit Transfer, money is being directly credited to the accounts of the poor and the role of middle men has become a thing of the past.

There is no dispute about the fact that the Congress initiated the work of providing optical fibre network way back in 2004. However, it moved on at a snail’s pace and broad band connectivity in most of the villages was still a far cry if the statistics available has anything to go by. The fact remains that optical fibre network accessibility in villages had been available in merely 59 villages till 2014 whereas it is just within 55 months of our dispensation that as many as 1 lakh 16 thousand villages have been provided with broad band connectivity. Your regime was scam ridden which witnessed so many scams -2G spectrum, commonwealth scam to name a few. In the Banking System, the culture of corrupt practices at the behest of high and powerful politicians reigned supreme.

Since Independence till the year 2008, banks had to lend a total of Rs.18 lakh crore which got enhanced to Rs.50 lakh crore in 6 years i.e. between the year 2008 and 2014. This was the repercussions of phone banking. What is remarkable to note here is that after 2014, there has been zero addition to the NPA inherited from the previous dispensation. We have brought in such laws that have helped recovery of Rs.3 lakh crore. We lent Rs.7 lakh crore under Mudra Yojana that has gone a long way in providing self employment to the people. In a way, the Congress had made the Defence Forces armless. In the year 2009, Indian Army had made demands for bullet proof jackets which was not procured till 2014. It is in the year 2016 that we have procured 50000 bullet proof jackets. In July 2016, we had accorded approval for the acquisition of 83 Tejas aircraft. It merits considerate attention here that the previous Government simply chose to ignore and overlook the needs of the Army, Air Force and Navy for 10 years whereas the military power of our neighbouring countries was on the rise continuously. It was a betrayal of trust with the country.

On Rafael, all I have to say is that the Congress Party is quite against strengthening our Air Force. In so far as black money or corruption is concerned, we still continue to stay committed to our vision of tackling these issues with zero tolerance. The fact of the matter is that we are not at all involved in any corrupt practices nor have we any obligation to fulfill or favouring any individual providing us the basis for survival which empowers us to wage fight against all evil practices that sadly crept in our system-be it black money or easy money or corruption of any other kind and even cases of impropriety in public life for that matter. We have been able to show 8 crore people the door who used to be involved in the role of intermediary and middle men by espousing Aaadhar enabled system.

We enacted Benami Transaction Act leading to the attachment of benami property. Post demonetisation 3 lakh shell companies have been closed down. Thanks to a flurry of initiatives having been undertaken by our Government over 20 thousand organisations have been compelled to close their shops down who would allegedly receive funds from abroad. These institutions were influencing bordering villages, Parliament and even the judicial process. A few of the Members have raised the issue of price rise today. When Shrimati Indira Gandhi was the Prime Minister, the rate of inflation had crossed 20 per cent. During the previous regime, inflation was recorded to be more than 10 per cent.

Over the last 4 years and 5 months, the rate of inflation has been 4 per cent. Prior to the introduction of GST average tax used to be exceeding 30 per cent. Currently 99 per cent or even more goods attract 18 per cent or even less taxation. We have given tax exemption upto Rs.5 lakh in the assessment of individual income tax. The interest chargeable on education loan has also been reduced from 15 per cent to 11 per cent. Likewise the rate of interest on housing loan has also been reduced. The price of LED bulbs has been reduced from Rs.300 to the region of Rs.60-70. This has resulted in lowering of electricity bills of Rs.50 thousand crore in the country.

The price of stent used in cardiac disease has been made cheaper. Knee implant surgery has also become affordable. Free of cost dialysis facility has been made available at the district level. More than 5 thousand Jan Aushadhi Kendras have been set up by us. More than 15 thousand people belonging to poor section of society are taking the benefit of Ayushman Scheme on daily basis. I would like to urge upon all the Members of Parliament to motivate maximum number of poor people residing in their respective constituencies to take the benefit of Ayushman Bharat Scheme. 10 per cent reservation has been extended to the poor youth of our country. Between September 2017 and November 2018 around 1 crore 80 lakh people have got employment in the organised sector.

Over the last four years, nearly 6 lakh 35 thousand new professionals have been added in the country. On the other hand, in the informal sector, more than 27 lakh new autos have been sold. In the transport sector itself, almost 1.25 crore people have got new employment opportunities during the last four and a half years. Likewise, there has been generation of as many as one and a half crore new jobs in the hotel industry. Taxi aggregator service has expanded hugely which has generated employment opportunities. For the first time the number of persons given loan under Mudra Yojana has gone up to more than 4 crore. More than 2 lakh new common service centres have been set up in the rural areas of the country. Highways are being constructed at double pace.

New airports are being constructed, railway stations are being upgraded. Crores of new houses are being built. The youth of our country is self-reliant today. Skill India, Start-Up India, Stand-Up India, Mudra Yojana are our novel initiatives of silk employment. The concerns of the farmers have also been taken care of. In the year 2009, the farmers were burdened with a farm loan of Rs.6 lakh crore, out of which mere 52 thousand crore had been waived off. Under Pradan Mantri Sinchai Yojana 99 schemes which had been hanging fire for long have been implemented and have seen the light of the day. We have laid emphasis on building Mega Food Park and new cold storage.

The mission of setting up of 22 thousand Grameen Hats is also at an advanced stage of being accomplished in the near future. We have equipped the farmers with the facility of online sale of their produce through e-Nam. A budgetary provision of Rs.6000 per annum for the farmers has been made in the budget presented this year. This move will result in the direct transfer of money into the accounts of nearly 12 crore farmers. A few of the Members have spoken about loan waiver in the State of Karnataka. It covers 43 lakh beneficiaries but merely 60 thousand people have actually been benefitted from this scheme. You used to go for loan waiver once in 10 years whereas the scheme launched by us shall be rolled out every year. We have made a special budgetary provision aimed at those engaged in pisciculture under the proposed Rashtriya Kamdhenu Aayog.

The farmers who had been equipped with Kisan Credit Card, the same kind of benefit is going to be extended to those engaged in cattle breeding and fisheries. On vaccination count, we introduced ‘Mission Indradhanush’ and the vaccination drive has been allowed to gain momentum beyond measure. Under Skill India drive, we have been able to impart a training to the lakhs of youth. Under Pradhan Mantri Shramyogi Maandhan Yojana, we have made budgetary provision for the pensionary benefits to the unorganised labourers.

Our Government have proposed a separate Ministry for the fishermen. Our Government has set up a department to take care of the affairs of the traders. It has been for the first time that we have embarked on a decision to set up a board for the welfare of the nomadic community. Today, India’s voice is heard on global fora. It is after my sincere endeavors that the NRIs have received the attention of all the political parties. In the recent past, Pravasi Bhartiya Divas was hosted in Varanasi in which maximum number of NRIs participated. It is a matter of great pleasure for all of us that Kumbh has been recognised as a world Heritage. This is the soft power of India. All the Amendments moved were negatived.