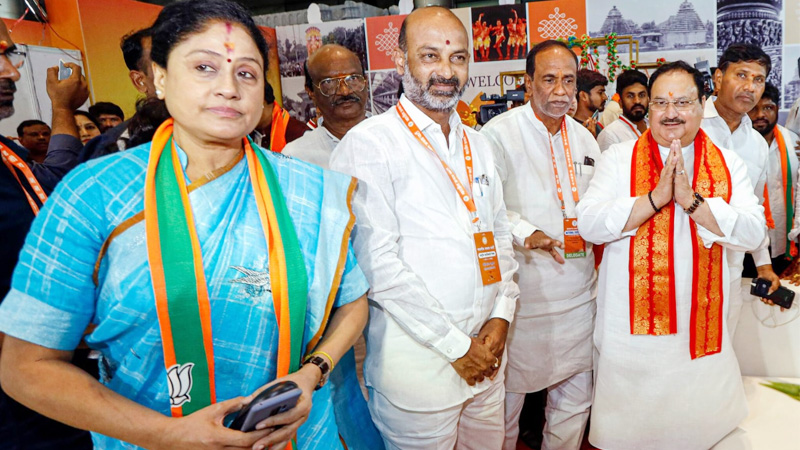 The National Executive meeting of the Bharatiya Janata Party held at Hyderabad, Telengana on 02-03 July, 2022 expressed its deep concern over the severe deterioration across all matrices and indices relating to economic, social, and human development in the state of Telangana. This sordid degeneration that the state has witnessed over the last eight years is unparalleled and the responsibility lies squarely with the current dispensation. We are publishing excerpts of the Draft Press Statement on Telangana:

BJP spearheaded an emotional mass movement for a separate Telangana 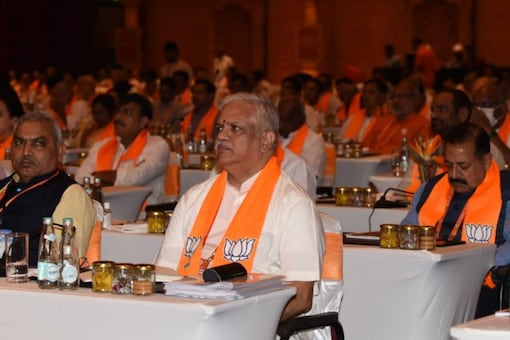 The collective will of the people of Telangana, amply supported by a constructive struggle of the BJP, created a compelling situation which led to the formation of Telangana state in 2014.

The struggle for the separate state of Telangana is inextricably linked to the emotions of the people.

In due appreciation of the struggle and the sacrifices made by the people, the BJP endorsed the demand for a separate state in 2006, when Sri Rajnath Singh was the President of the party. Further, the BJP as a policy has supported Babasaheb Ambedkar’s vision of smaller states, as they are amenable to faster development, better administration, and deeper political representation of all communities. A separate Telangana was therefore ripe for development, as has been proved in the case of the formation of other states such as Chhattisgarh, Uttarakhand etc.

It is evident that the separate Telangana movement intensified only after the BJP plunged into it with complete earnestness and sincerity at a national level. Late Smt. Sushma Swaraj, who in Telangana is known as ‘chinnamma’held several rallies across Telangana state and, made critical interventions during the parliament to echo the mood of the then state.

It is evident that the BJP was at the forefront of the movement for a separate Telangana state and Telangana became a possibility only due to its proactive and unequivocal support.

Neellu, Nidhulu, Niyamakalu (water, funds, and filling employment vacancies) have been the quintessential strands of the movement both in 1969 and in the second phase that lasted till the formation of Telangana in 2014.

After eight years of the current dispensation, the position of Telangana has become far worse. The BJP did not support the Telangana movement to hand it over to the whims of a family and to enable the family to amass illicit wealth.

The TRS has failed miserably on all the three metrics of the Telangana movement,Neellu, Nidhulu and Niyamakalu (water, funds, and filling employment vacancies). It would not be an exaggeration to state that the people of Telangana feel that they have fallen from the frying pan directly into the fire (penam lo nunchi poyyi loki, Tave se nikle choolhe me gire)under the present dispensation.

During the last eight years Telangana witnessed a brazen and blatant attempt to perpetuate a dynasty. The power that the son of the Chief Minister enjoys today, over and above other cabinet ministers, speaks for itself. Governance is centered around the family, which obviously leads to rampant corruption.

The law-and-order situation is dismal in the state. The leaders of the ruling party, their partners in power and their siblings involve in heinous crimes. The Police is misused to foist false cases on opposition Parties. MLA’s children become Keechakas and a drug culture has been perpetuated due to the lack of proper vigilance. In fact, Telangana has registered the highest number of cases under Protection of Children from Sexual Offences Act (POCSO). As per the latest National Crime Record Bureau, the Crime rate against Women stands at 95.4 per 1 Lakh population and is among the Top-5 in the country and nearly double the national rate of 56.5. Similarly, the Crime rate against children stands at 28.9 per 1 Lakh population and is higher than the national rate of 28.9.

Telangana where all the people,
especially the youth, would be
happy by way of finding
opportunities for employment
and for the sustenance of
lives and livelihoods

What we see in Telangana is sheer despotism, unbridled nepotism, and brazen arrogance, which the Telangana people have always resisted.

Moreover, when the union government took a policy decision to implement 10% reservation for economically backward classes in appreciation of the fact that poverty has neither class nor caste. It took more than 2.5 years for the Telangana government to notify reservations for Economically weaker sections. Even now the implementation is unsatisfactory and incomplete. On the other hand, the union government has been making unstinting efforts to develop Telangana, notwithstanding the callous attitude of the state government. In the spirit of Co-operative Federalism, the 14th Finance Commission and the 15th Finance Commission recommend devolving 42% and 41% of the central taxes to states respectively. As a result, the amount accrued to Telangana and Andhra Pradesh has significantly increased. In the last 9 budgets presented by the Narendra Modi Government between 2014 and 2022, approximately, Rs. 1.30 Lakh crore has been transferred to the state of Telangana. For a comparison of the quantum of change, Telangana region’s share was approximately Rs. 30,000 crores between 2009 and 2014 in the undivided state while the state received Rs. 70,000 crores between 2014 and 2019 in the first 5 years of Modi Sarkar.For the development of panchayats in Telangana, Rs.4,320 crore has been sanctioned by the 15th Finance Commission, and Rs. 820 crore was released as a first installment.

At the time of the formation of Telangana state in 2014, the total length of national highways was 2,511 KMs, whereas the same has increased to 4,996 KMs, an increase of 2,485 KMs in 2022, an increase of 99%. The Centre will be constructing a 340 KM length of regional ring road outside the outer ring road at a cost of Rs. 8,000 crore.
After the formation of Telangana state, the centre’s allocation for railways has increased considerably. The railways took up different projects worth Rs. 31,281 crores in Telangana. In Telangana, during 2014-21, 321 Km sections of new line and doubling projects have been commissioned at an average rate 45.86 km per year. This is 164% more than average commissioning during 2009-14 where 17.4 Km per year was commissioned.

During the COVID-19 period, the Centre freely distributed food-grains to 1.92 crore poor people in Telangana. Close to 25 Lakh metric tons of rice was allocated for free distribution to the residents of Telangana at a cost of approximately Rs. 9,000 crores. The Centre had helped to the tune of Rs. 433.34 crores in financial assistance to street vendors under the Prime Minister’s Swanidhi Scheme.

Under the Swachh Bharat Mission, more than 31.43 lakh households have been provided with separate toilets from 2014 to date. Till 2014, only 27.45% of toilets were available in Telangana, whereas presently Telangana is an open-defecation free state with 100% of toilets in place. Similarly, under the Pradhan Mantri Ujjwala Yojana, 11.11 lakh women have been allotted cooking gas connections. During the last eight years, Rs. 1,613.64 crores have been released for the development of BCs, SCs, and STs in Telangana.

BJP – The real and only option for a developed, inclusive Telangana

The BJP has been growing steadily in Telangana. In the parliamentary elections of April 2019, the BJP won four seats, TRS won 9, Congress won 3 seats, and MIM retained its seat. The BJP secured 19.45%, significantly higher than the votes it secured in 2018. Of course, the nation-wide wave in favor of Sri Narendra Modi was the quintessential factor.

In a by-election for the Assembly segment of Dubbaka held in October/November 2020, an area nestled amongst the constituencies of the incumbent Chief Minister’s son and his nephew, the BJP secured a resounding victory.

The frustration of the Chief Minister and his cabinet colleagues clearly reflect the fact that BJP is growing stronger in the state. It is evident that only a double engine government whose conviction is nation and nation alone would be able to lend meaning to the spirited struggle of the people of Telangana.

Under these circumstances, the BJP, with its nation-first conviction and focus, and with an impeccable track record of corruption-free and scam-free governance, can only understand the aspirations and expectations of the people of Telangana.
The BJP will make an endeavor to place a viable alternative that truly realizes the aspirations of the martyrs before the people and eventually convince them to throw out this dynastic and corrupt government.