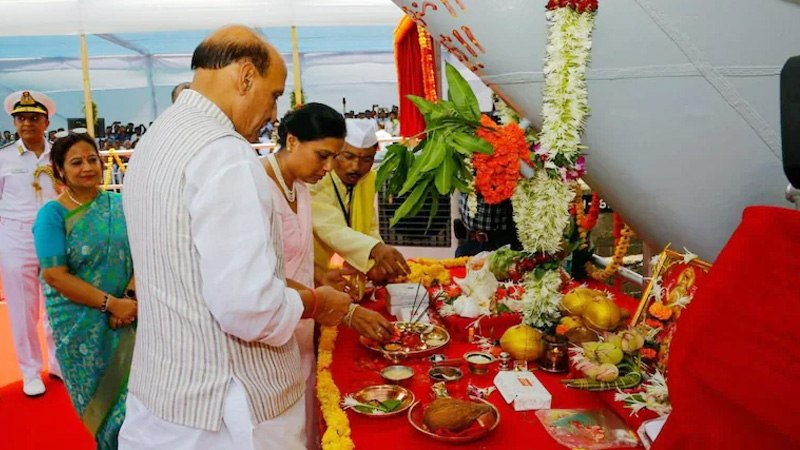 Raksha Mantri Shri Rajnath Singh launched two frontline warships of the Indian Navy – ‘Surat’ and ‘Udaygiri’ – at Mazagon Docks Limited (MDL), Mumbai on May 17, 2022. ‘Surat’ is the fourth Guided Missile Destroyer of P15B class, while ‘Udaygiri’ is the second Stealth Frigate of P17A class. Both warships have been designed in-house by the Directorate of Naval Design (DND) and built at MDL, Mumbai. The Raksha Mantri, in his address, described the warships as an embodiment of the Government’s unwavering commitment to enhance the country’s maritime capability, with focus on achieving ‘Aatmanirbharta’, at a time when the world is witnessing disruption in global supply chain due to COVID-19 and the Russia-Ukraine conflict. He congratulated the MDL for continued ship production activities despite the pandemic and meeting the strategic requirements of the Indian Navy in the current geo-political scenario.

Shri Rajnath Singh stated that the two warships will add might to the Indian Navy’s arsenal and represent to the world India’s strategic strength as well as the power of self-reliance. “INS Udaygiri and INS Surat are the shining examples of India’s growing indigenous capability. The warships will be among the most technologically advanced missile carriers in the world, that will cater to the present as well as future requirements. In the times to come, we will not only fulfil our own needs, but will also meet the shipbuilding requirements of the world. We will soon realise Prime Minister Shri Narendra Modi’s vision of ‘Make in India, Make for the World’,” he said.

The Raksha Mantri lauded the Indian Navy for responsibly discharging its duties of keeping the Indo-Pacific region open, safe and secure. Defence Research and Development Organisation (DRDO) and Indian Navy successfully conducted maiden flight-test of indigenously-developed Naval Anti-Ship Missile launched from a Naval Helicopter from Integrated Test Range (ITR), Chandipur off the coast of Odisha on May 18, 2022. The mission met all its objectives. It is the first indigenous air launched anti-ship missile system for the Indian Navy.

The missile employed many new technologies, including an indigenously developed launcher for the helicopter. The missile guidance system includes state-of-the-art navigation system and integrated avionics. The flight test was witnessed by senior officers of DRDO and the Indian Navy.

India on May 12 successfully fired the Extended Range Version of BrahMos Air Launched missile from Su-30 MKI fighter aircraft. The launch from the aircraft was as planned and the missile achieved a direct hit on the designated target in the Bay of Bengal region.