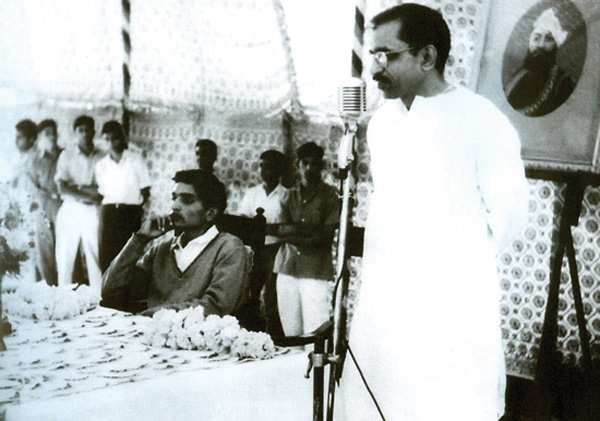 “EARNING to feed onself is nature; to snatch from others to feed oneself is perversion, but to earn to feed others is culture (sanskriti).” —This sentence encapsulates the essence of Deendayalji’s thought. The motivation to feed others, however, can result only from a sense of oneness with others in the absence of this feeling one can never be motivated to work for others.


We all know that homo-centricism, i.e., to think only of one’s own generation is treated as natural and self-evident in the Western and American thought. The Western man feels no sense of obligation to the succeeding generations because the generation preceding him did not bother about him. Western parents do not seek children; children are merely unavoidable by-products of their pleasure-orierted coming together. The children of these ‘by-product’ children are similar bye-products only.

Hence it is natural that no generation should feel a sense of responsibility to the other. The essentially ego-centric American way of life was caused by this thinking, a way of life in which his own well-being alone is the individual’s concern. In such a culture the motivation to earn to support others doesn’t even germinate. Hence it is that in the American System work begins to be evaluated in terms of money at a rather early age in a person’s life. Children are expected to be financially self-dependent by the age of sixteen or so, so that they no longer remain a burden on their parents. And this leads to the weakening of the bond of affection between parents and children’ consequently children separate rather early from their parents to start their own family.

Life in its totality is a continuum. We are mere dots in it. The cause of our existence lies in the past and influences our future. The realisation that this cause influences our life generates a sense of responsibility in us.

We are not merely part of a family. Being part of the society, we consider all those who have served it as our ancestors. That’s why we consider Rama, Krishna, Vikramaditya as great linkages in our ancestral chain. Our ancestral tradition has come down to us unbroken from generation to generation. We adapt the inspiring ideals of our ancestors in accor¬dance with our present needs, thereby sh aping our future too.

The Unbroken Flow of Time

In our national context, likewise, we think of the Past, the Present and the Future in a totality—in all their aspects. Shri Aurobindo has said that pride in the past, concern for the Present and dream about the future help a society progress. Deendayalji has given this thought an organised form in his Integral Humanism. He said that the entire universe is a manifestation/extension of the same absolute. Hence atman and Parmattnan, the finite and the infinite are indivisible, inter-dependent, integral. We are not able to experience this infinite, timeless, integral absolute because of the mesh of ignorance and “maya”. The individual tends to treat only his family as his extension. He rises above his personal interest and willingly faces all kinds of deprivations for the happiness of his family-members—mother, father, sister, wife, daughter, son etc.

From Individual to Society

But the unifying principle of oneness with others should not stop with the family, because family after all, is a unit of society. Whatever I earn, consume to nourish myself and my family, I belong to society, hence, I have a duty to the society that sustains me and my family. If I care for the society, the society shall in turn care for me. Similarly a society is a part of the entire humanity. Hence all societies should work in the larger interest of humanity as a whole. Humanity in turn is a part of Nature. Nature provides mankind with all the means and resources for its nourishment and protection. Nature itself is a part of God. This is how we all are inalienably united with the Ultimate. This is the essence of Hindu thought, Bhartiya thought. Deendayalji named this thought only Integral Humanism.

Everything in this universe is inextricably linked with everything else. The entire world is affected by whatever transpires anywhere in the world. Due to our failure to realise this basic fact of universal inter-relationship, we make mistakes, ruthlessly exploit nature, destroying it and in turn face nature’s wrath. Nature’s fearsome revolt against its senseless destruction by man has raised a question mark about man’s continued existence on this planet. This catastrophic situation has arisen because of the West’s un-integral thinking. We need to proceed henceforth with a unifying integral multi-dimensional approach for the welfare of the global human community. Deendayalji’s Integral Humanism presents such a comprehensive approach.

He offered a view of development ranging from man to God. He said that man is constituted of : (a) body, (b) heart, (c) intellect, and (d) soul. And these four constitutive elements characterise not man alone. Every institution must have them.

The concept of nation also includes these four elements. Nation is conceptualised as having : (a) geographical territory and its inhabitants as its body, (b) the sense of belonging to the nation creates a feeling of nationalism. This feeling is the nation’s heart. The essence of nationalism lies in common ancestry, tradition and culture, (c) The laws and the constitution we frame to run the affairs of the state is the nation’s intellect, and (d) nation’s chiti manifesting in its goals is its soul. Vivekanand said that nations come into existence with a destiny and with distinct goals, a nation survives as long as it remembers and strives for its goals and loses its raison d’etre when it forgets them and consequently loses its existence.

A system that caters to all four—body heart, mind and soul—and creates a harmonious symbiosis between man, society, nature and God—such a system above can be beneficial to all mankind. Our ancient Hindu order, its various institutions attempted such a symbiosis only.

But the British rule tore apart our institutions. The British transplanted their own institutions here, institutions that were alien to our genius and ethos. And that has caused all-pervasive incongruities and contradictions in our life. We don’t feel inspired or enthused to forge ahead. Deendayalji used to say that all our institutions must accord with our own lifegoals and must be essentially integral. It was in the context of this basic philosophy that we called ‘culture’, i. e. earning to feed others ‘Integral culture’.