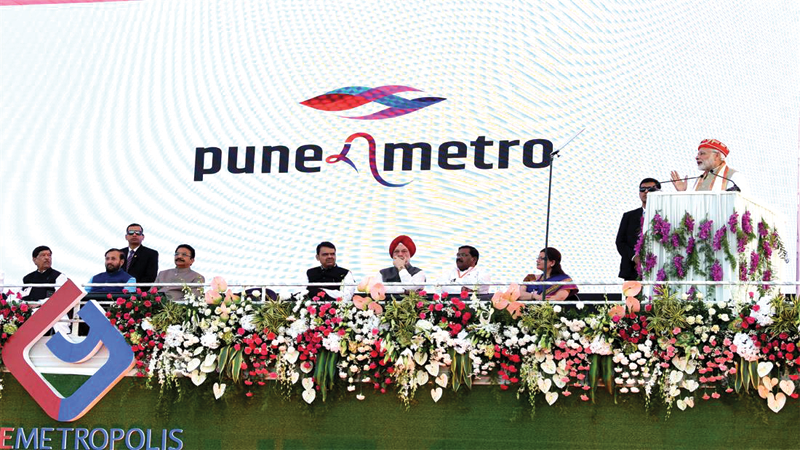 The Prime Minister, Shri Narendra Modi on December 18, 2018 unveiled important projects related to housing and urban transportation during his visit to Maharashtra.

At a public meeting in Kalyan, the Prime Minister laid the Foundation Stone of two important metro corridors. These are the Thane-Bhiwandi-Kalyan Metro; and the Dahisar-Mira-Bhayander Metro. The two corridors, once completed, will greatly facilitate public transport in the area.

Also in Kalyan, he launched the 90,000 units’ EWS and LIG Housing scheme under the Pradhan Mantri Awas Yojana. The total worth of projects for which the Foundation Stone was laid in Kalyan is about Rs. 33,000 crore.

In Pune, the Prime Minister laid the Foundation Stone of Pune Metro Phase-3.

Addressing the gathering in Kalyan, the Prime Minister highlighted how the pace of infrastructure and public transport development had been accelerated by the Union Government. He reiterated the Union Government’s vision of “Housing For All” by 2022.

Addressing the gathering in Pune, he said the government is placing great emphasis on connectivity infrastructure. He said the focus is on providing next generation infrastructure, and integration of the transport sector. He said that through Startup India, and Atal Innovation Mission, India is emerging as a centre for technology.

The delegation expressed its strong support of the Prime Minister’s vision for making India a five trillion dollar economy in the near future. They gave an overview of the vast growth potential of the media and entertainment industry in India, and said that this sector is poised to contribute in a significant way towards this goal.

The delegation pitched for lower, and uniform rates of GST, for the entertainment industry in India.

Members of the delegation strongly called for the development of Mumbai as the global entertainment capital, through various initiatives and proactive approaches.

The Prime Minister said that the Indian entertainment industry enjoys immense popularity across the world. It is one of the key elements of India’s rising soft power status, globally, he added. He assured the delegation that the Union Government is supportive of the media and entertainment industry; and would consider the suggestions positively.