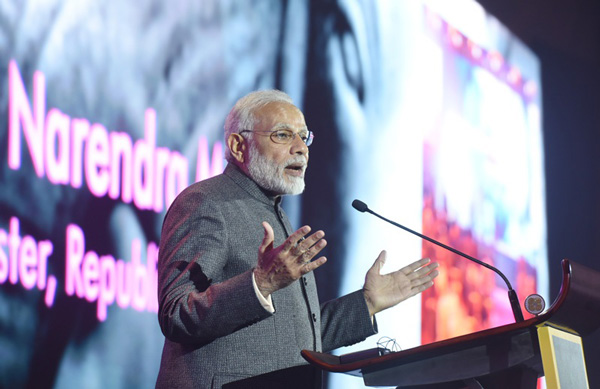 Prime Minister Shri Narendra Modi addressed the ASEAN Business & Investment Summit in Manila, Philippines on 13 November, 2017. During his address at the India-ASEAN Summit, Prime Minister Shri Narendra Modi reaffirmed India’s commitment to strengthen cooperation with ASEAN nations and called for united efforts in mitigating terrorism. He invited the ASEAN leaders as the Chief Guests for the 2018 Republic Day, saying that 125 crore Indians are waiting to welcome them. Here we are publishing the brief excerpts of his speech.

We are both pluralistic societies and vibrant democracies. Our economies are among the fastest growing economies in the world. We have large, young and aspiring populations that are innovative and enterprising. The Philippines is a services power house just as India is. And, just as in India, here in Philippines also, the government wants to see change, bring about inclusive growth, Develop infrastructure, and fight corruption.

This morning we witnessed a brilliant performance of the dance drama ‘Rama Hari’ based on the Ramayana at the Opening Ceremony of the ASEAN Summit. It depicts the way historically the people of India and ASEAN have been bound together.
The task of transforming India is proceeding on an unprecedented scale. We are working day and night to ensure Good Governance which includes easy, effective and transparent Governance. To give you an example: we have started open auction for natural resources including telecom spectrum, coal mines and other minerals and even private radio channels. This has together contributed about 75 billion US dollars in revenue. Using technology, we are enhancing responsibility and reducing discretion and corruption. We are using our Unique ID system in financial transactions and taxation for this purpose and the results are already visible. These steps, coupled with demonetization of high value notes has resulted in formalizing a large part of our economy.

India has climbed 30 places in the World Bank Ease of Doing Business Index this year. It is the biggest jump by any country this year and a recognition of India’s long term reform trajectory.

And, the world is taking notice:

– We have moved up 32 places in the last two years in the Global Competitiveness Index of the World Economic Forum;

– We have also moved up 21 places on the Global Innovation Index of WIPO in two years.

– We have moved 19 places on the Logistics Performance Index of 2016 of World Bank;

Friends,
Most of the sectors of our economy are now open for FDI. More than 90 per cent FDI sectors are on automatic approval route. India has emerged as a front-runner in attracting foreign direct investment. Compared to last three years, we have received 67 per cent more FDI in this year. Now, we are a globally integrated economy. Moreover, these mile-stones have been achieved even before some of the major recent reforms.

This year in July, we have implemented the highly complex task of migrating to a uniform Goods and Services Tax for the whole country. This has done away with a vast range of State level and central level taxes through-out India. A very large part of India’s population had no access to banking services. This deprived them of the opportunities for savings as well as access to institutional credit. With the Jan Dhan Yojana, within a matter of months, the lives of millions of Indians were transformed. 197 million bank accounts were opened in one year. Till August this year, 290 million such accounts have been opened in Indian banks. Nearly 200 million Ru-pay cards were issued for easy cash-less transactions. Access to banking services by the poor has also played a major role in tackling corruption in government.

One of the major themes of this summit is entrepreneurship we have launched a campaign called Make in India. Through this initiative, we are committed to transform India as a major player in the global value chain. We want to make India a global manufacturing hub. At the same time, we want our youth to be job creators; not just job seekers.

Out-bound tourism from India is growing at one of the fastest rates in the world. Given the primacy of connectivity, India is organizing an ASEAN – India Connectivity Summit in New Delhi next month with Ministers, officials and business representatives from all ASEAN countries participating. Just as India sees business opportunities in the region, I am sure that the ASEAN business community recognizes the potential for business in India. 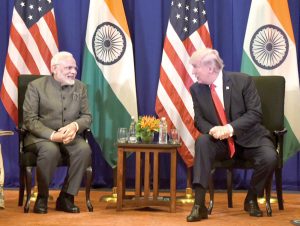 PM Shri Narendra Modi, who is in Manila for the 50th edition of the ASEAN Summit also, had a productive meeting with the US President Donald Trump. In the meeting that lasted about 45 minutes, Donald Trump and PM Shri Modi discussed ways to improve bilateral economic policies. “Bilateral was mainly on economic issues, trade & investment was discussed. Apart from extending bilateral cooperation the thrust of the discussion was how to grow trade and investment,” informed Foreign Secretary S Jaishankar. 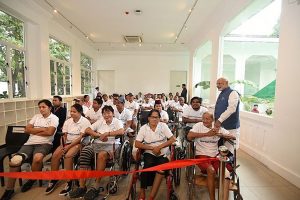 PM Shri Narendra Modi visited the Mahaveer Philippine Foundation, a long running humanitarian cooperation programme between India and the Philippines. It was set up by the highly regarded Indian–origin Mayor of Manila Dr. Ramon Bagatsing. The Foundation has been instrumental in the fitment of the Jaipur Foot to needy amputees. About 757 amputees benefitted from the programme in 2017. 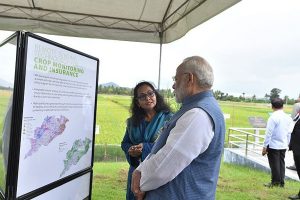 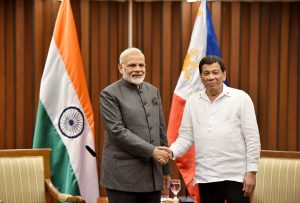 Prime Minister Shri Narendra Modi and Philippines President Rodrigo Duterte on 13 November, 2017 strengthen the bilateral ties between the two nations. This is the first Prime Ministerial visit from India to the Philippines in 36 years. President Duterte and PM Shri Modi had an excellent meeting; and President Duterte said he’d like to have very good relations with India.
During that meeting four agreements of cooperation were signed between the two leaders – one on defense cooperation, logistics, agriculture and MSME.

”An ordinary Indian can contribute several times more than what can be done by the embassy. And I have experienced that today every Indian in the world speaks about himself being an Indian with a pride and confidence. It’s a big thing for any country. This region is extremely important for India and since the time you people have given me responsibility to work as Prime Minister then from the beginning we have emphasized upon the Act East Policy. The world acknowledges the strength of all these things only when India is strong, when India is capable and it is moving forward to scale new heights in every field. That is why it is our duty to make the 21st century a century of India if it is considered the century of Asia, it is as important as studying and taking inspiration from our past.

And I don’t think it’s difficult. We started Pradhan Mantri Jan Dhan Scheme and banks were feeling uneasy as they were required to open accounts even cases of zero balance. The bank accounts of 30 crore countrymen were opened under the zero balance scheme. But you will be happy to note that in such a short span of time 67,000 crore rupees have been deposited in Jan-Dhan accounts. Today more than 2.25 lakh villages in India have now become open defecation free. Given gas cylinders, gas connection to five crore families.Once, I requested the people of India to give it up and that 1.25 crore families of my country, voluntarily gave up the gas subsidy. We will give that to the poor people.We are moving ahead taking the most common people with us and its results will be so good that you too would not like to live abroad for a long time.