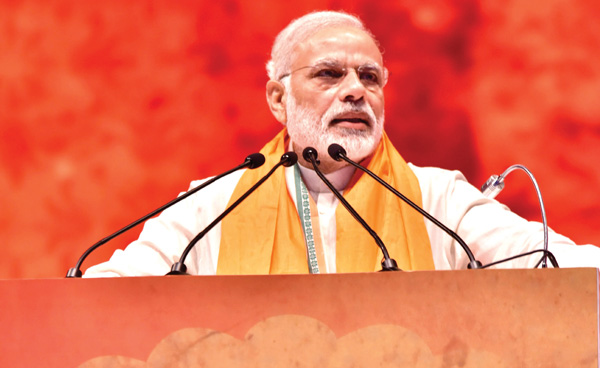 Prime Minister Shri Narendra Modi attacked the Congress party for defaming Gujarat. Addressing an election rally in Jamnagar on December 04, 2017 he said that Congress cannot tolerate or accept leaders from Gujarat and hence always displayed displeasure towards them and the people of the state.

At Dharampur, taking a jibe at Mani Shankar Aiyar’s statement in media about elevation of Rahul Gandhi as Congress President, PM Shri Modi said, “I want to congratulate Congress party for their Aurangzeb Raj.” Aiyar had earlier remarked that when Shahjahan or Aurangzeb took over, there were no elections then, and it was natural for the heirs of Badshah to get the throne.

PM Shri Modi added, “Why has the Congress stopped saying BJP is anti-Muslim? Earlier, they would go out of the way to show their secularism but now we are all seeing what they are doing in this election, where they are going. Unfortunately for them, Muslims know their real nature.”

Questioning the Congress on why they did not give Constitutional Status to the OBC Commission, PM said, “We got a bill but when we did so, they stalled it in the Rajya Sabha. This anti-OBC Congress should be severely punished by the people.”
Shri Modi blamed the Congress party for lack of health infrastructure in tribal areas of Gujarat. In this context he shed light on initiatives like 108 Ambulance service undertaken by the BJP government that was ensuring better healthcare facilities for people in such areas.

While speaking at Bhavnagar, the PM said that Gujarat had developed due to the power of Shanti, Ekta and Sadbhavna. He slated how the Congress again and again tried to divide people on the lines of caste, community, urban and rural. “Congress has learnt ‘divide and rule’ from our colonial rulers rather well”, alleged Shri Modi.

Taking at dig at Congress leader Kapil Sibal, the PM remarked, “Congress has a very ‘able’ lawyer in Kapil Sibal. He is always handling all the indefensible and wrong matters. In 2007 he came to Viramgam and said after the results are out Modi will be in Jail. He was very powerful in that government.”

At Junagadh, lambasting the Congress’ way of governance, PM Shri Modi said that people were not only keen to see the BJP win but also ensure that those who were defaming Gujarat were defeated.

He added, “While we worked hard to make Junagadh the tourism capital, the Congress did not devote attention to this region. They stalled the ropeway project for years.”

The PM recalled Sardar Patel’s contribution towards integrating the nation. He also spoke at length about the Sauni Yojana and how it benefitted the farming community in the state.

At the rally in Jamnagar, Shri Modi said that people now had no expectations from the Congress party. He spoke about how Congress was being wiped off from every state after every election.

Speaking about distribution of LED bulbs, he said, “Cheaper LED bulbs have led to more savings, which has benefitted middle class families. I want to ask the Congress why LED bulbs were priced high in your time.”

The PM stressed on ‘Padhai’, ‘Kamai’, and ‘Dawai’. He said BJP government was dedicated to ensure proper education for students, employment for youth and proper healthcare facilities for the elderly. “Since BJP has formed the Government in Gujarat, the state is ahead in employment opportunities. Parts of Gujarat have drawn people from all parts of the country”, he added furthermore. 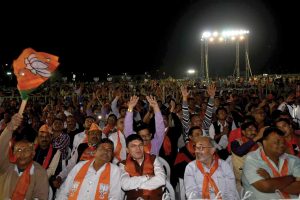 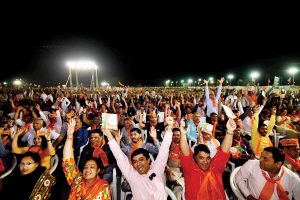 The PM said that the government had waged a strong battle against corruption and black money. Measures like demonetization helped unearth black money and shell firms operating in the country.

Speaking about the surgical strikes, the PM said it demonstrated the prowess of India’s armed forces. He added, “Someone who served at a high position in our Air Force has said that after 26/11 they went to the then PM with a plan for surgical strikes. Sadly, the then Government did not show courage to do that. When we were attacked in Uri, see how we answered terrorists.”