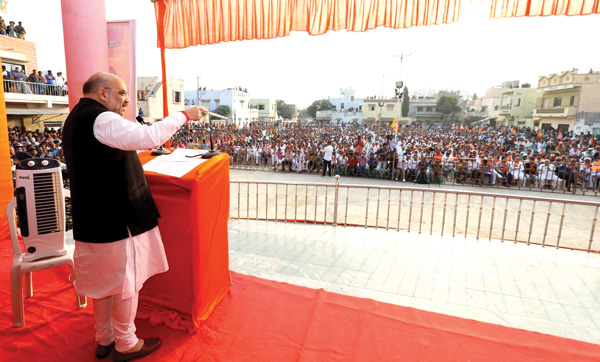 BJP National President Shri Amit Shah on 07 December, 2017 said that there was a huge BJP wave in Gujarat which will wipe away the Congress. Addressing an election rally at the temple town of Dwarka, he said, “I have already toured 132 Assembly constituencies. Dwarka is the 133rd. In each and every place, there is a huge wave in favour of the BJP. This wave will wipe the Congress away… They are seeing dreams (of winning) in Gujarat. I do not understand where they get the courage to see such dreams.”

Hitting out at the Congress over the corruption issue, he said that in three and half years of the Modi government at the Centre, the Opposition cannot accuse the BJP of being involved in corruption of even 10 paisa.

“In the 10 years of your rule (UPA government regime), you did scams and corruption amounting to Rs 12 lakh crore, while in the three and half years of Modi government, even our rivals cannot accuse us of corruption of 10 paisa,” Shri Shah said and narrated how after Shri Modi became the Prime Minister in 2014, the Congress lost states like Maharashtra, Haryana, Jharkhand, Assam and Manipur to the BJP.

With Congress vice-president Rahul Gandhi asking the BJP to give accounts of the work done in the last 22 years, Shah hit back at him, saying, “Whenever, Rahul Gandhi questions us about the work done by our government, I say, the first thing that we did is to give the country a Prime Minister who can talk.”

Mocking former Prime Minister Manmohan Singh, the BJP Presidents said, “Nobody else, except you (Rahul) and your mother (Sonia Gandhi) could hear the voice of the person whom you had made the Prime Minister.”

“Since 1995, the people of Gujarat have always blessed BJP by voting for the party. We have been in power since 1995 and we have not been involved in a single issue that will force the BJP workers to hang their heads (in shame),” Shri Shah said, emphasizing how the BJP was fighting the Assembly polls on development plank, while he accused the Congress of “spreading the poison of casteism on the soil of Gujarat”.

The BJP President also raised the issue of border skirmishes with Pakistan, saying, “During Sonia-Mamohan Singh’s government of 10 years, Pakistan-supported terrorists used to cross the border and behead our soldiers… But PM Modi had hit back at Pakistan by ordering surgical strikes,” Shri Amit Shah added.