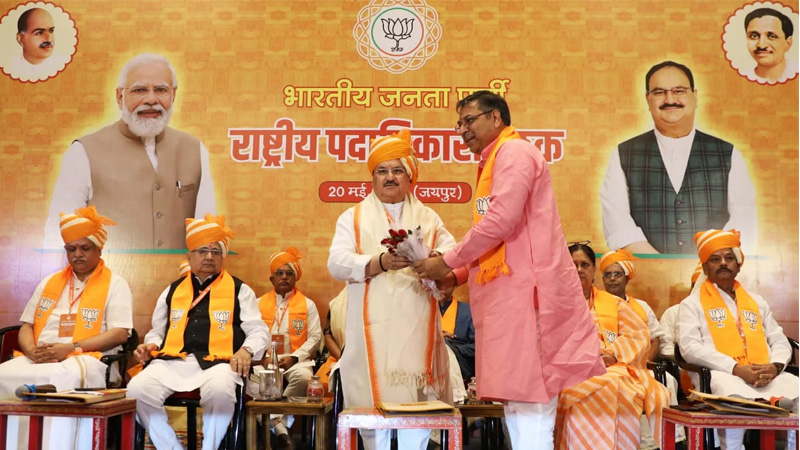 In a press release the Bharatiya Janata Party said under the transformative leadership of Prime Minister Shri Narendra Modi, the age-old aspiration of realizing the vision of “Ek Bharat, Shreshtha Bharat” (United India, Great India) has been effectively achieved.

Excerpts of the Release :

In 2014, the people of India reposed their faith in the BJP and NDA, which was led by Shri Narendra Modi. After 30 years, a single party was blessed with a full majority by the people of India. In 2019, the Narendra Modi-led NDA government returned to power with an even bigger mandate. The BJP’s tally rose from 282 to 303. The return of a full majority government, after completing its full tenure of 5 years under the same Prime Minister, has happened after almost six long decades.

When Shri Modi assumed office in 2014, he faced immense challenges from the first day itself. The electoral mandate in 2014 had come in the backdrop of severe policy paralysis, corruption, cronyism and blatant dynastic politics by the UPA Government. Due to the abysmal mis-governance of the UPA, the people of India were losing faith in democracy and the abilities of governments to deliver. The huge mandate to Shri Narendra Modi reignited the people’s Faith in our democratic fabric. It also sowed seeds of hope among Indians that decisive, inclusive and compassionate leadership which fulfilled people’s aspirations was possible.

Powered by the strength and skills of135 crore Indians and driven by the Mantra of ‘Sabka Saath, Sabka Vikas, Sabka Vishwas, Sabka Prayas, the Modi Government has undertaken numerous initiatives aimed at removing poverty and enhancing prosperity. The work of the Modi Government is in line with what Pandit Deendayal Upadhyay Ji called ‘Antyodaya, which means serving the very last person in the queue.

Shri Narendra Modi has demonstrated what true leadership is all about. From the ramparts of the Red Fort, he spoke about topics such as cleanliness and toilet construction, which had been taboo for previous governments. By ensuring total sanitation coverage he fulfilled a major dream of Mahatma Gandhi. India’s strides in sanitation achieved various things: it strengthened the Fight against poverty, it improved healthcare standards, and it ensured a boost to tourism as well as economic activities.

The robust Faith in PM Modi was seen in instances such as the middle class giving up their own LPG subsidy and senior citizens giving up their own railway concessions, so that these benefits could go to the poor. Such a culture was virtually unheard of before because of the corruption of those who ruled India for many decades.

Not a believer in keeping the poor dependent, PM Modi has brought a culture that celebrates self-reliance, dignity and entrepreneurship. This can be seen in the success of ‘Make in India’, the strides in ‘Ease of Doing Business’, the reforms and the success of the PIL schemes. India’s success in the start-up ecosystem shows how the youth of India has risen to the occasion and demonstrated their prowess. It shows that with the right support, our youth can do wonders. PM Modi’s clarion call for an ‘Aatmanirbhar Bharat’ is not restricted to government policies alone. It reflects the collective spirit of135 crore Indians who want to make India an economic powerhouse.

PM Shri Modi’s government has ushered in a new era of women empowerment. History will remember the PM as the epitome of kindness and compassion. This is because lakhs of Indians are getting access to top quality and affordable healthcare due to Ayushman Bharat PM-JAY.
Indians began work on the vaccine very fast; the timely rollout of those vaccines led to several lives being saved. Throughout the pandemic, PM Shri Modi ensured that 80 crore people have access to free rations.