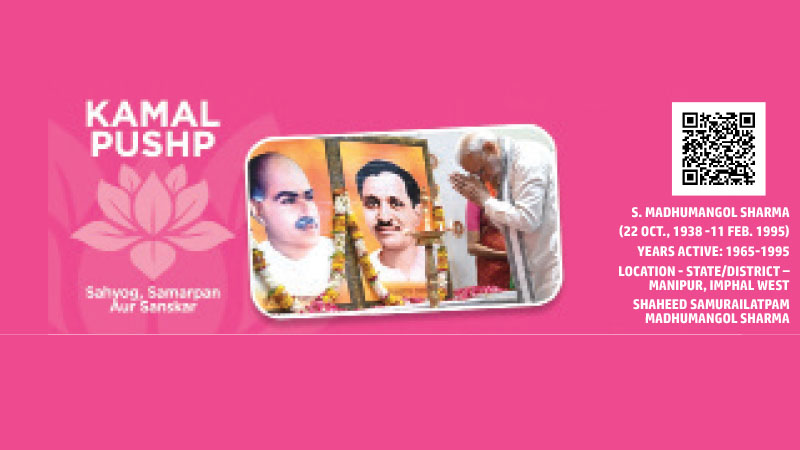 From a very good educational background, Shri Samurailatpam Madhumangol Sharma, at the age of 12 years, developed great enthusiasm in taking active part in various religious and spiritual discourses. He participated in Sat Sangh programme under the guidance of Shri Yogendrajit Singh at the Sat Sangh Centre, Keishamthong Top Leirak, Imphal. In 1965, he came in contact with Shri Bhasker Kulkarni, RSS Pracharak and became an active member of RSS. He completed OTC 1st year and 2nd year in Assam and 3rd year from Nagpur.

He became Organization Secretary, Vivekananda Rock Memorial Committee, Kanyakumari under the leadership of Eknath Ranade in 1969 and was involved in organizing awareness and fund raising campaign for construction of Vivekananda Rock Memorial at Kanyakumari. He worked under the guidance of Manania Sadasiv Golwalkar (Guruji), Manania Balasaheb Devraj, Manania Raju Bheiya and Manania Sudarshanjee to expand Sangha activities in the state of Manipur and later on, he became Manipur Vibhag Karyavah.

During EMERGENCY (1975-1977) period, a large number of RSS Karyakartas were imprisoned under MISA. Shri S. Madhumangol Sharma was also jailed for 19 months in Manipur Central jail under MISA.

In 1977, after the Emergency was lifted, and subsequently, Janata Party govt. was formed in Manipur State. Shri S. Madhumangol Sharma was one of the architects in the formation of Janata Party Government in Manipur.

In 1984, he became the first Lok Sabha Candidate of BJP in Manipur and secured around 30% from the total polled votes, when BJP was just in its initial stages as full blown functioning party in Manipur. He extensively toured Manipur valley and hills for the expansion of BJP in Manipur.

He was BJP State President from 1984 to 1991 and also served as National Executive Member for three consecutive terms. He also co-ordinates the North-East States of the BJP. The oppressive and anti-people policies of the Congress-led state government were solely responsible for the rise of terrorism in the state. At that time, anti-India movement was at its height with extortion and killing of innocent people. Shri S. Madhumangol Sharma came forward to propagate patriotism and national unity through BJP and Sangha ideologies.

He was continuously under threat by terrorists for fearlessly working to stop extortion and killing of innocent people. As a consequence, he was an obstacle for the separatists, and on 11th Feb 1995, at 7.30 AM, two terrorists came to his house and shot 12 gunshots at close range. One bullet pierced through the book on Integral Humanism which he always carried in his shirt pockets along with one pocket size of Bhagavad Gita.

Shri LK Advani, the then National BJP President, visited his house on 15 Feb. 93 and pronounced that he was the true Shaheed, and gave him the title “SHAHEED” as he died for the cause of his motherland who gave up his life, but not the cause.
He was the first Bachelor of Engineering in Mining and Geology in the state of Manipur. He was associated with many institutions and organization like Gita Mandal, Kalyan Ashram, Vidya Bharti, Vivekananda Kendra and participated in many state level convention as resource person. He won the hearts of many people of all age groups with his in-depth discourse of the philosophical implication of Shrimad Bhagavat Gita. As a true Swayam Sevak he laid down his life serving the people of Manipur till his last breath. He resigned from government service from the post of Add. Director, Industries Dept, Govt. of Manipur, so that, he could wholeheartedly render his service to the activities of RSS and BJP. He also worked extensively, spreading the message of Swami Vivekananda among the youths, local clubs, etc in Manipur, with great oratory skill.