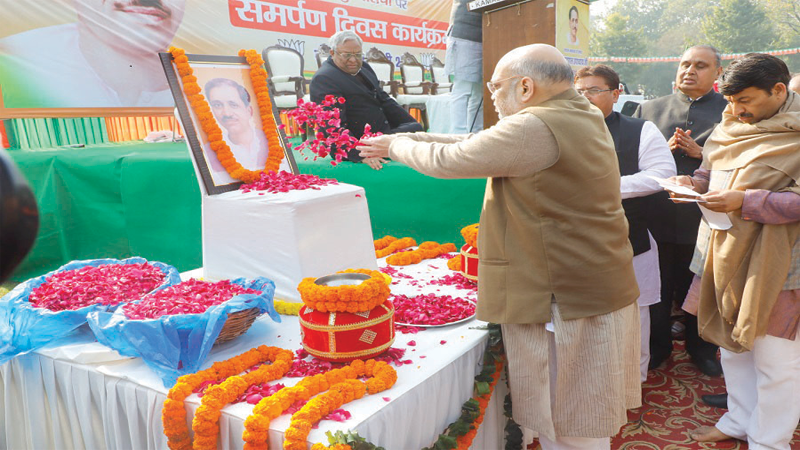 Nationwide the Bharatiya Janata Party observed the Punyatithi of Pandit Deendayal Upadhyaya (11 February, 2019), the source of inspiration of the party, as ‘Samarpan Diwas’ to commemorate his contributions and his emphasis on ‘honesty’ in public life. The main function was organised at Pt. Deendayal Upadhyay Park in front of the party national headquarters in New Delhi.
Giving his donation to the party organization via “NaMo App” on Samarpan Diwas, BJP National President Shri Amit Shah appealed to all the party Karyakartas to donate a sum of Rs.5 to Rs.1,000 through “NaMo App” to the party.
Addressing on the occasion he said from being a Party Karyakarta to the President of Jan Sangh, Pandit Deendayal Upadhyay never thought about himself, his entire life was devoted to the cultural nationalism and national interest. Salute to such a nationalist and fine organizer on his death anniversary! 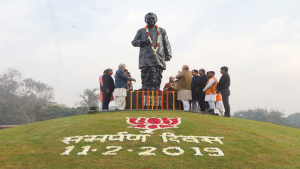 The BJP President said Pandit Deendayal Upadhyay gave ‘Mantras’ to the Karyakartas to bring Party first and put self in the last. His philosophy of “Ekatma Manav Vad” (Integral Humanism) is not only capable of solving the problems of India but the whole World.

Our aim is to march forward with the principles of “Antyodaya” for cultural nationalism and welfare of the poor. The BJP is the means to achieve this goal he added. Shri Shah further added nobody should be hungry, ill, illiterate in the country – this principle of ‘Antyodaya’ should be the basis for national reconstruction. The Country’s dignity should spread throughout the World and we should be able to re-establish our role and status as the Vishwaguru.

Shri Shah informed, ‘It should be decided through public debate how cost of elections should be reduced and how purity is brought in the election medium. Prime Minister Shri Narendra Modi has taken this initiative and he has limited the cash donations up to only Rs.2,000’.

We have fixed a target that two Karyakartas from every booth should contribute Rs. 1,000 each to the party through “NaMo App”. Party Karyakartas should donate a part of their earnings to the party he added.

He said every Karyakarta should speak with pride that his party runs with his money and not with the money of capitalists. It is the duty of Bharatiya Janata Party and its Karyakartas to take other political parties in this direction. He said the BJP should create such a pressure with its sincere work and public support that other parties should tread on the path of chastity.

The BJP National President said today, there is a big war going on against corruption by the PM Shri Narendra Modi. The Corrupt and those people who have looted public funds had to flee away from the country because the “Chowkidar” had started sending them in jail. Previously they were part of the Congress party.

On the one hand, the Prime Minister has started a campaign to cleanse the public life of corruption; on the other hand, the BJP is devoted to the service of mother India. We can proudly say that if any culture has promoted and conserved democratic values, it is the Indian culture he said.