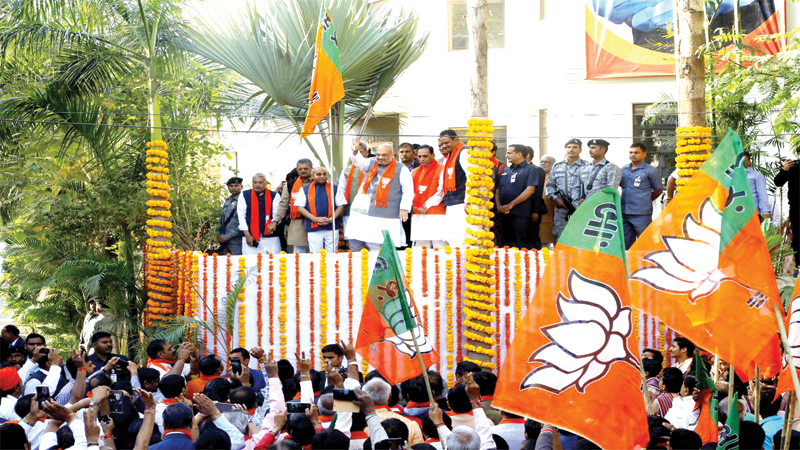 BJP National President Shri Amit Shah on 11 February, 2019 launched the nationwide “Mera Parivar, Bhajapa Parivar” campaign by hoisting the party flag at his residence in Ahmedabad, Gujarat. The exercise will last till March 02 and it will be concluded with ‘Vijay Sankalp’ Yatra on March 03 with bike rallies across the country. The campaign seeks to unfurl party flags at five crore houses of workers and sympathizers as part of the drive ahead of the announcement of the schedule for Lok Sabha polls.

Under this programme Party office bearers will also launch vigorous door-to-door campaign presenting voters with achievements of the BJP led NDA government at the centre. A sticker declaring ‘Mera Parivar, Bhajapa Parivar’ will be stuck on doors of party workers, sympathizers’ houses in addition to flying the BJP flag on their respective houses with their permission.
The campaign was formally kicked off from Pandit Deendayal Upadhyay auditorium, where the BJP National President addressed party workers on the preparation of the Lok Sabha elections, due in April-May this year.

Launching the campaign Shri Shah said, “This BJP flag is a symbol of development, belief and nationalism, and shows how appeasement, casteism and family rule is ending in the Modi era”.

Shri Shah said among other measures, the party workers will reach out to beneficiaries of different government schemes, like Jan Dhan bank accounts, toilet beneficiaries under the Swachh Bharat scheme, Mudra loans and LPG connection scheme, to mobilize people in our support.

The BJP had received over 17 crore votes in 2014. Now we have details of 11 crore members in our record. There are 35 crore beneficiaries of Jan Dhan bank accounts, seven crore under Mudra and over six crore under Ujjwala scheme to give free LPG connection to the poor and we will reach to every house to get their support, he said.

Shri Amit Shah in his address said, “On 3rd March, over 3 crore motorcycles will campaign in every Vidhan Sabha constituency across the country for Vijay Sankalp rally.”

The party sources have described the “Mera Parivar, Bhajapa Parivar” drive as a part of the mass mobilization campaign of the party for Lok Sabha elections, expected to be held in April-May, claiming it may touch up to 20 crore people if a house has on an average four residents. The Party have already verified details of over 9.5 crore new members out of the 11 crore it had enroll during its membership drive following its victory in 2014. The party has also targeted different groups for mobilization ahead of the polls.

Later in the day, Shri Amit Shah attended a cluster of meeting of party leaders in Godhra for Panchmahal, Dahod and Chhota Udepur Lok Sabha seats in central Gujarat.

In-charges of the three Lok Sabha seats, party office-bearers, sitting and former MLAs and MPs from the region attended the meeting. A large number of party leaders and workers joined the campaign and shared pictures on social media platforms.