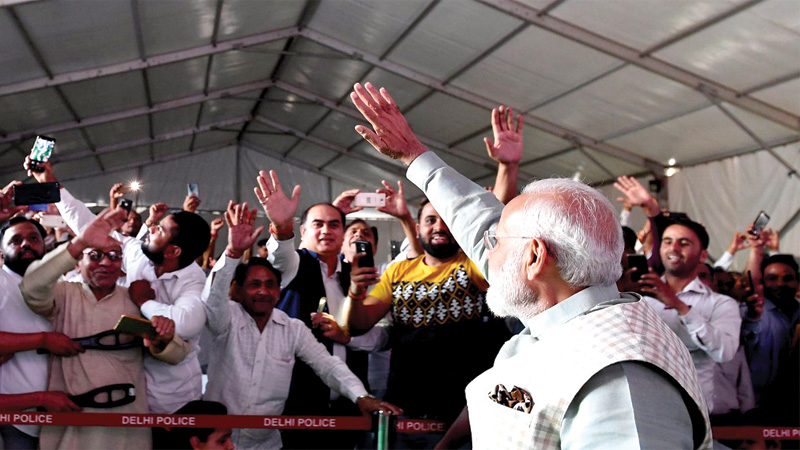 Addressing a huge ‘Traders Sammelan’ at Talkatora Stadium in New Delhi on 19 April, 2019 Prime Minister Shri Narendra Modi said BJP government aims to raise India’s ranking in ease-of-doing-business to top the 50 in the next five years from the current ranking of 77.

Speaking to the traders, PM Shri Modi said, “India has jumped to the 75th rank globally in terms of ease-of-doing-business in the last five years. My aim is to reach the 50th position in the next five years.”

Emphasising that the traders have always “thought about the country” and attached themselves to the “needs of the nation”, the PM said, “I am very much impressed with one thing from you – your hard work.”

Calling traders the backbone of the Indian economy, the PM said, “You do not just run business. In fact, you serve the people by working for long hours every day”.
The prime minister said he always believed that traders are also meteorologists. “Because they plan everything in advance and estimate beforehand,” he said.
Making a strong re-election pitch, Shri Modi promised traders a Rs 50-lakh loan without any collateral, credit card facility and a pension scheme for small shopkeepers.

Lashing out at the Congress, he said earlier the Congress-led governments used to insult traders. “They called all businessmen chor (thieves) without realising the contribution of the business community to the Indian economy,” he said.

“Our government has brought in Startup India Standup India initiative. We have promoted the digitisation of business. Now, youth are very much interested in starting their own business,” PM said. “Now you can get a loan of up to Rs 1 crore in less than one hour,” he said.

Stating that his government has implemented the Goods and Services Tax (GST), Shri Modi said, “The GST has brought in transparency in business which has in turn raised state revenues by one-and-a-half times.”