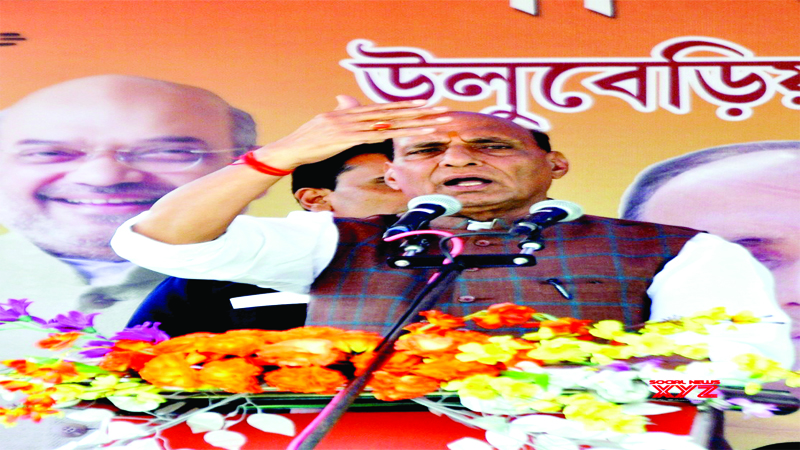 Union Home Minister Shri Rajnath Singh on 18 April, 2019 mocked Congress’s promises to eradicate poverty, and said India will actually be freed of poverty the day it gets rid of the Congress.

Addressing an election rally Howrah, West Bengal Shri Singh said since the days of Jawaharlal Nehru, the Congress has been promising eradication of poverty. “Now, Rahul Gandhi is also assuring that. The fact is the day the country becomes free of the Congress, it will also get freedom from poverty,” he said.

Lashing out at the TMC in Bengal, he alleged that democracy has ceased to exist under its rule in the state. “Democracy ceased to exist in Bengal. The way violence has been unleashed on opposition parties, is it a sign of democracy? In Bengal, we would fight till we restore democracy,” he asserted.

Under the TMC rule, “all the three — the mother, the motherland and the people are suffering,” he said, referring to the TMC slogan of ‘Ma, Maati and Manush’.

Union Home Minister Shri Rajnath Singh on 18 April, 2019 said the country has earned respect across the world during the last five years of the Modi government.
Speaking at an election rally in Shahjahanpur, Uttar Pradesh Shri Singh said the Samajwadi Party (SP) and the BahujanSamaj Party (BSP), saying BJP cannot get success on the basis of national security. “The country has earned respect at the global level during the BJP government. We made an anti-satellite missile which only Russia, China and the US had,” Shri Singh said.

India is on the sixth spot “as far as economy is concerned whereas in 2014 it was ninth. We want the country to become a superpower and ‘vishwa guru,” he said.
The home minister said after the Mumbai attack in 2008, “The then Congress government did nothing, but after the Pulwama attack, Indian forces went inside Pakistan and carried out its operation.”