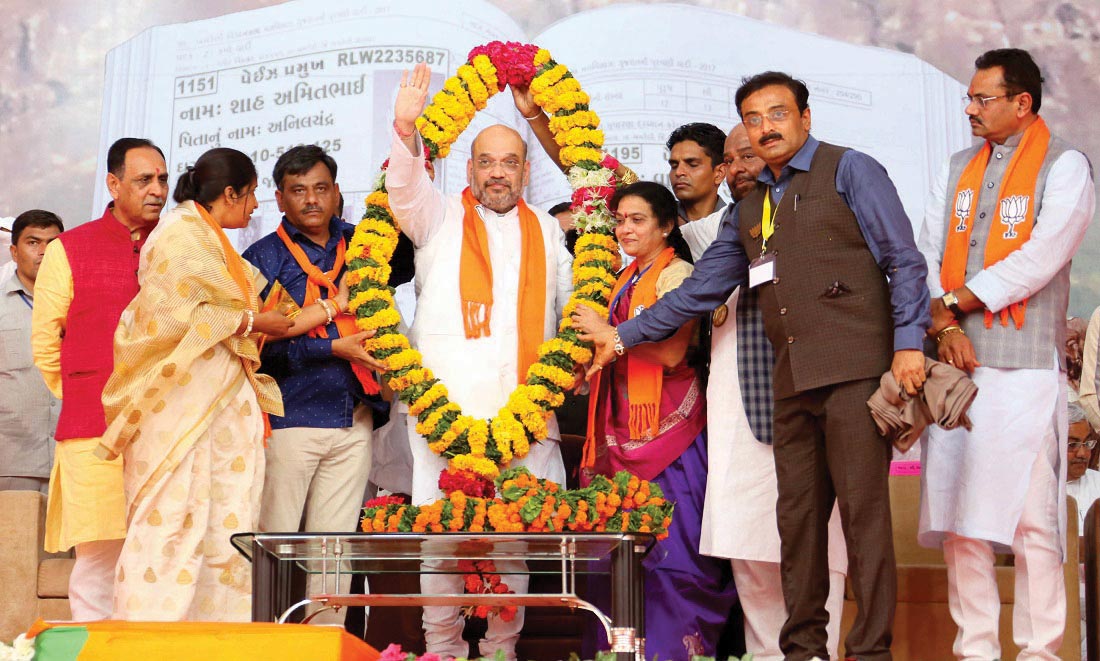 On the occassion he said about one lakh 25 thousand panna pramukh from 10,550 booths of central Gujarat of Central Gujarat gathred at the birth Bhumi of Sardar Patel. It ensures our victory in coming assembly elections. He said, Media must publish the photo of this grand gathering of our activists so that the Congress party gets to realize coming BJP`s grand victory in the state.

The BJP was launched as Jansangh with 10 members has become the party which has, now, more than 11 crore members. He added, “Today, there are 13 states where BJP is in power and four states more ruled by with the help of allies. The party has 330 members of parliament and full majority government under the leadership of Narendra Modi. The glory achieved by the party has become possible by dint of the hard work of innumerable booth Karykartas.”

In Bharatiya Janata Party People like Narendra Modi, who born in poor family having no political background becomes Prime Minister of the country, he added.

Shri Shah also illustrated his political journey from a booth karykarta to the party’s national president.

He said, “Due to hard work of our karykartas ‘Vikash Yatra’ has continued in Gujarat since 1995.”

On the first day of his visit to Gujarat he addressed a karyakarta rally in Junagadh. Here,he reiterated that ruling BJP in Gujarat would win over 150 seats in this year’s assembly polls which would be contested not for victory but to uproot Congress.

Addressing the rally he said “ Congress leaders like Kamalnath says that Narendra Modi goes to foreign trips quite frequently. Yes, I know why he feels it. Former PM Manmohan Singh also went on foreign trips like US, Russia, China, Korea etc. carrying a two-page written speech. These were so alike that he delivered speech meant for Thailand in Malaysia and vice-versa. These trips were never noticed. But case of Modi is very different. Wherever he goes thousand gather to welcome him on Airports. It is infact the honour of 125 crore Indians. The whole world takes notice of his trips. He has increased prestige of India in the world.