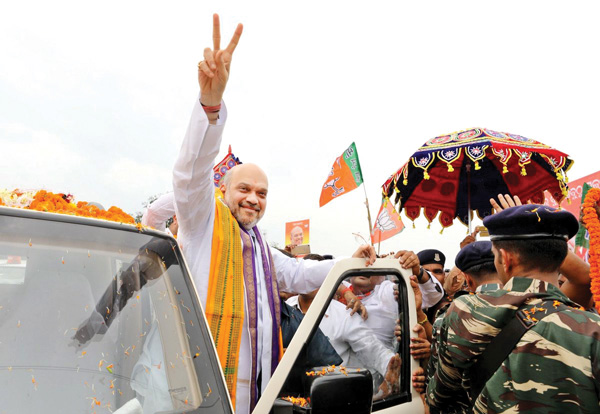 JP National President Shri Amit Shah who reached the Eastern State of Odisha on 03 July, 2017 night for a three-day visit aimed at reviving the party’s infrastructure at the grassroots level, visited Berhampur city, its neighbouring constituencies and the home district of Chief Minister Naveen Patnaik in the very first day. The visit is part of Shri Amit Shah’s 110-day countrywide Pravas to strengthen the party.

Shri Shah kicked off his three day campaign on 04 July, 2017 to strengthen the party at the root level and encourage party workers in Ganjam district by launching a door-to-door campaign.

Travelling in a long cavalcade, Shri Shah stopped at Badapokhariya and interacted with the gathering. Prior to that large number of people were seen making serpentine queues outside the State guest house in Bhubaneswar to meet the BJP leader. BJP workers and common public welcomed Shri Shah on the way to Ganjam. 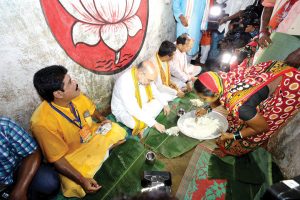 During the visit to Ganjam District the party National President embarked on a door-to-door campaign at Hugulapata village of Kukudakhandi Block in the outskirts of Berhampur city, Ganjam district.

Later he addressed a meeting of booth workers and met five families in the Hugulapata village and discussed various welfare programmes implemented by the Narendra Modi government with them. Along with other BJP state leaders Shri Amit shah also had lunch with a Dalit family in the village.

Addressing a mass gathering at Hugulupata in Ganjam district, he said ‘Booth Committee’ would be formed in all the 37000 booths across the State in a time-bound manner, adding that he has worked at grassroots level and well-aware of the issues.

Tearing into the failures of the BJD government, Shri Shah said, “People of Odisha are yet to get electricity and drinking water even after 17 years of rule of the BJD government. Toilets are still elusive in villages and the rate of educated unemployed is increasing in the State.”
Despite being rich in minerals, natural resources and hundreds of kilometers of coastline, Odisha continues to be a poor State and is ‘far behind’ in terms of development, the BJP president alleged.

In the afternoon of the first day visit thousands of BJP Karyakartas, Booth workers, BJP leaders and Common people have given a grand reception to the BJP National President Shri Amit shah at Berhampur city, his second stop of the day. Booth level workers and common people from Ganjam, Gajapati, Kandhamal districts and other parts of south Odisha welcomed him to Berhampur.

At Ambapua, Berhampur Shri Shah addressed a huge meeting of booth workers and BJP Office Bearers from South Odisha. He asked party workers to dedicate themselves to booth level activities. He said more than four lakh party workers in the country have variously pledged to give 15 days, six months or one year as full-timers to strengthen the party at the booth level.

Shri Shah educated the cadres how the Modi Government has significantly increased the financial assistance to Odisha since 2014 but the State Government is not able to properly spend it.

He put the blame of underdevelopment of the State on both the Congress and the BJD, whom he described as the rulers since Independence.
Launching a scathing attack on the Naveen Patnaik-led Biju Janata Dal (BJD) government on lack of development in the state, the BJP President Shri Amit Shah said BJP will win the 2019 elections with a two-thirds majority.

Speaking to grassroot workers in Berhampur, he called for their active support so that the BJP could win 130 seats in the 2019 Assembly polls.
Touching the emotional chord of the Ganjam people, where migration is high, he criticised the BJD Government for not creating local employment for the migrant youths.

At Berhampur, the BJP chief launched a scathing attack on the BJD government in the State.

He blamed the Odisha government for “under development” despite the State being rich in resources. According to him, the people in Odisha were yet to get round-the-clock power supply.

He lamented that only 14% of the population had access to safe drinking water and despite the Centre’s support, only 22% families in the State had toilets at home.

He claimed that during the three years of the Narendra Modi government at the Centre, grants for Odisha had increased manifold, which the State government was failing to utilise.

He criticised the BJD government for the migration of labour from Odisha to other States, including Gujarat. 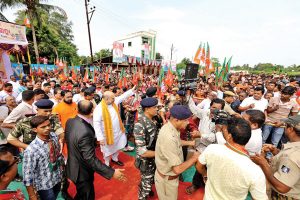 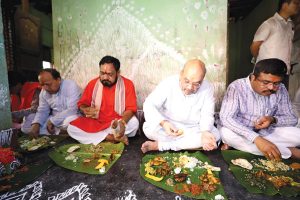 As part of “Mo Booth Sabuthu Majboot (My Booth is the Strongest)” programme, the BJP National President addressed a meeting of party workers at Panikoili. Earlier in the day, he offered prayers at Maa Biraja temple and took blessings of Maa Durga.

He received a grand welcome by people while on his way to the Jajpur district from Bhubaneswar. He tweeted, “Same energy and enthusiasm among people at different places in Odisha. People of Odisha yearning for change”.

On the last day of his Odisha visit Shri Amit Shah met BJP Zilla Parishad members, block presidents and vice-presidents in Khurda district. He has also met senior party leaders to chalk out a strategy for the 2019 elections.

On Day-Three, he met some families at Basantpur, on the outskirts of Bhubaneswar and had breakfast with them. Later, a meeting of party leaders was held at a hotel in Bhubaneswar. 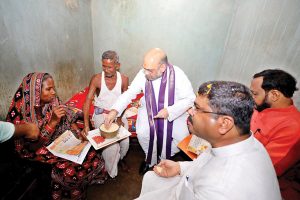 Winding up his three-day tour to the state as part of BJP’s drive to strengthen the party at the grassroots BJP president Shri Amit Shah sharpened his attack on Odisha Chief Minister Naveen Patnaik and accused him of always “flying” to places while the state languished in backwardness. “I have been in Odisha for the last three days and visiting places. But, I am travelling by road and not flying by helicopter like Naveen Patnaik,” he said.

The BJP President, who attended meetings at several places including Basantpur in Khurda district, alleged that the “high-flying” chief minister, who boarded a chopper or a plane wherever he visited, had failed to grasp and address the people’s problems.

In a stinging attack on Mr. Patnaik over poverty and backwardness in the state, Shri Shah said that during my visit I had sensed that the people of Odisha had made up their mind to throw the BJD out of power as they were fed up with 17 years of misrule.

“I can clearly see love and affection among the people for Prime Minister Narendra Modi and the BJP. While the people of Odisha are now with the BJP, our party is also eager to serve them and pull the state out of poverty and backwardness,” he said.

With the BJP focusing on Odisha to expand its base ahead of the 2019 Assembly and Lok Sabha elections, the party President said the state would not be able to witness development and progress as long as the BJD was in power.

Shri Amit Shah, who visited several houses and interacted with people from different sections, including party workers from the booth and the panchayat levels, he said only the BJP was capable of transforming Odisha into an advanced state.

Highlights of the Speech

The BJP President said the BJD government had “failed” to utilize the money and implement different schemes properly, leaving the state in the grip of poverty and backwardness.

BJP would win the assembly elections with two-third majority in 2019 and form the next government in the state,
People now realized that BJP alone was capable of pulling the state out of the “morass” and usher it in rapid development.

The BJP president asked the party leaders and workers to make people aware of various schemes and programmes launched by the NDA Government for the development and progress of the state.

They should also tell people about the “failure” of the BJD government on all spheres.

It was a paradox that a state, endowed with abundant mineral and natural resources, was languishing in poverty.

The party was determined to steer Odisha on the path of speedy development.

The people of Odisha are yet to get electricity and drinking water even after 17 years of BJD rule.

The BJP President said that the number of jobless educated people was growing at an alarming rate.

The youth of Odisha were forced to migrate for work and contribute to the progress of other states due to the “lack of opportunities at home”.

He reviewed the programmes being carried out under Pandit Deendayal Upadhyay birth centenary Karya Vistarak Yojana in Odisha. 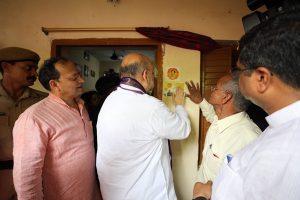 BJP National General Secretary and Odisha BJP In-Charge Shri Arun Singh interacting with media persons said the BJP which is on a high after winning 297 of the 851 zila parishad seats in February’s panchayat polls, has booth-level workers in just about one-third of the 92,000-odd polling booths in the state. He said with BJP National President Shri Amit Shah’s visit, the party now aims to kickstart the process of recruiting more booth-level workers to strengthen the booths before the party take on the BJD late next year.

He said, Odisha is one of the states we aim to win in 2019. The mass contact programme of the National President is aimed at strengthening the party at the booth level.