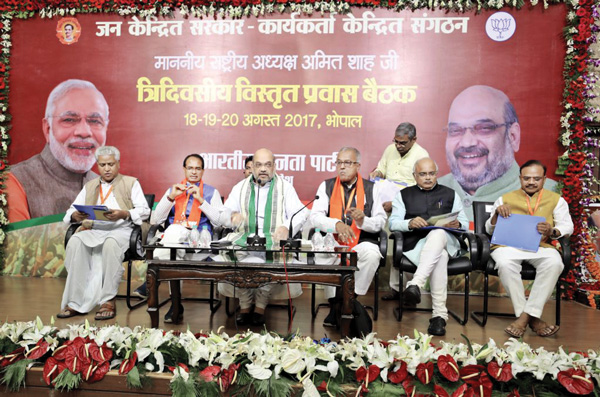 On a three day Pravas to Madhya Pradesh BJP National President Shri Amit Shah arrived in Bhopal on 18 August, 2017. This is part of his 110-day nationwide Pravas to strengthen the party ahead of 2019 general elections.

Addressing the Madhya Pradesh BJP’s core group members, office-bearers, MPs, MLAs and district Presidents, among others, at the party headquarters in Bhopal on 18 August, 2017 Shri Shah reminded the activists that the party has become a political force to reckon with due to hard work, dedication and sacrifice of its leaders over the years.

Today the BJP has become a party of 10-12 crore members because of many stalwarts who have dedicated their lives in building and strengthening the organization, he said.

‘We have to ensure no place in the country is left where we don’t have our flag. For this, we have to strengthen the organization further,’ Shri Shah said.

‘Character is the basis of our foundation,’ he said, and called upon the BJP workers to ensure the party is present in every (polling) booth, from Kashmir to Kanyakumari and from Kamrup to Kutch.

Addressing the karyakartas on August 19, 2017 Shri Shah said BJP has not come to power for mere five or 10 years, but at least 50 years and called upon workers to strengthen the party and take it to every part of the country.

‘We have not come to power for 5-10 years, but at least 50 years. We should move forward with a conviction that in 40-50 years we have to bring major changes in the country through the medium of power,’ Shri Shah said. 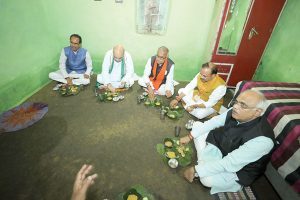 BJP president Shri Amit Shah on 20 August, 2017 had lunch at the residence of a tribal worker of the party in Bhopal as part of the BJP’s outreach programme to strengthen the bond with the karyakartas and particularly with socially-oppressed classes. Shri Amit Shah flanked by Madhya Pradesh Chief Minister Shri Shivraj Singh Chouhan and state party President Shri Nandkumar Chauhan, ate ‘daal-baati’, ‘kadi-chaval’ and sweets at Kamal Singh Uike’s house in Sevania-Gaud area of the state capital.

Interacting with mediapersons after lunch he said the BJP is committed to development and the states where it has formed governments have seen fast-paced growth, he said and cited the examples of Rajasthan, Madhya Pradesh and Chhattisgarh which were earlier called ‘BIMARU’ States.
He said the NDA government has given over Rs 5 lakh crore to Madhya Pradesh for different schemes. In the last three years, the Modi government has launched 106 schemes for welfare of the poor and other disadvantaged sections of the society.