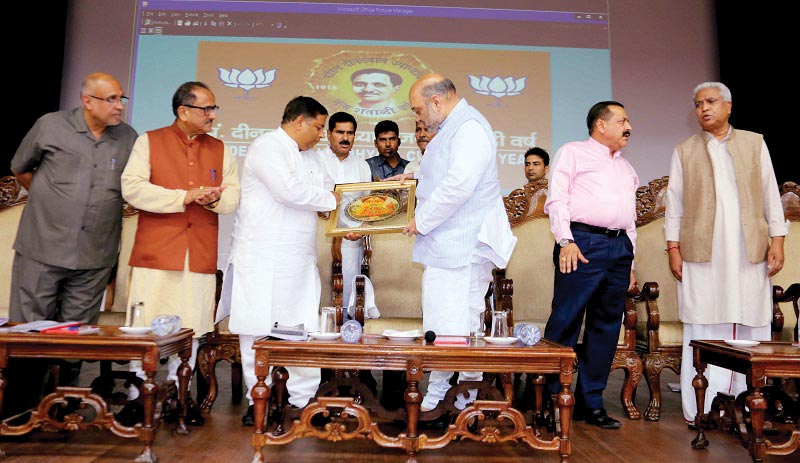 The Bharatiya Janata Party President Shri Amit Shah, in a two-day visit to Jammu and Kashmir as a part of his Vistaar Yatra, reached Jammu on 29 April, 2017.

Before setting off for his Yatra Shri Shah in an interaction with the media stated that he is on a 95-day all-India tour as part of Vistaar Yatra (Expansion Tour) ahead of the 2019 Lok Sabha election in order to strategize ways to win the 120 seats the BJP lost last time. He said the States have been divided into categories and he will be spending 1 to 3 days there accordingly. “We have also set a target of 120 seats where we had lost in 2014. My tour will focus on taking stock of our organizational strength and further expansion of ideology and electoral appeal across the country,” he said.

Other states that will be in focus include West Bengal, Odisha, Telangana and Kerala, as he stated. The party has graded the states into A, B and C category in order of their electoral significance, and he will spend three, two and one day there respectively. Shri Amit Shah’s 95-day all-India tour will end by September 25, which is also the 101st birth anniversary of Jana Sangh ideologue Pt. Deen Dayal Upadhyay.

In his first visit to J&K after BJP formed a coalition government with the PDP in 2015, BJP President Shri Amit Shah while addressing to party leaders and workers at the Convention Centre asked party’s ministers in the state to visit the Kashmir Valley meet the common masses and expand the party’s base.

In Jammu Shri Shah directed party ministers not to remain confined to their assembly constituencies, but visit the remote areas of Kashmir, meet the common masses there and address to the problems facing them’’. ”He has assigned duties to party ministers in this regard.

Shri Shah stressed that Kashmir is an integral part of India and the people of the Valley are Indian nationals. “BJP is with them as they are our own people. Except for a few spoiling the situation at gunpoint, a majority of the people there want peace and normalcy. They all are Indians and protecting their lives and dignity is the responsibility of our governments at the Centre and in the state. Restoring law and order is our joint responsibility and we will fulfill it”.

Addressing concerns over suggestions of talks with separatists, Shri Shah told the gathering that “for BJP, the nation always comes first’’. The party president also said that the party’s base needed to be broadened and people appraised of the central government’s welfare schemes so that they can take advantage of it.