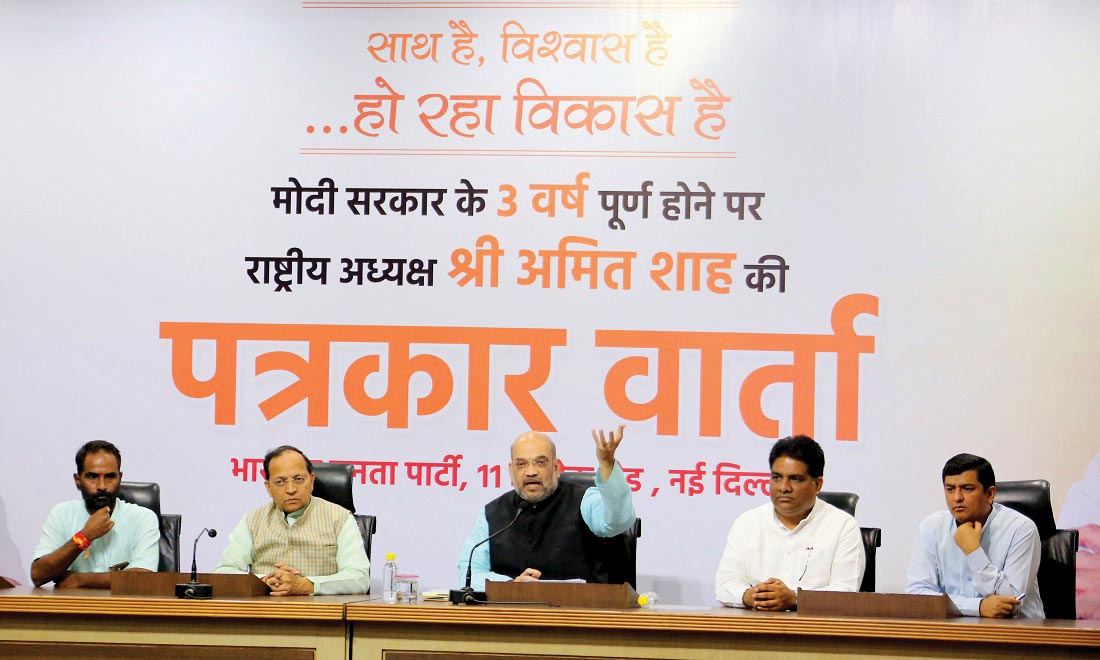 On the occasion of the NDA government completing its three successful years at the Centre under the leadership of Shri Narendra Modi, BJP National President Shri Amit Shah addressed a press conference convened at the BJP National Headquarter on May 26. He discussed at length the achievements of the Modi government and the policies of the government for the welfare of the poor.

Shri Shah said that the BJP government at the Centre under the leadership of Shri Modi gave constitutional status to the National OBC Commission which was pending since 1955 and gave crores of the people of the country an opportunity to live with their heads held high. The ‘One Rank, One Pension’ (OROP) scheme which had been pending since forty years was completed by the sensitive BJP government and deposited around 8000 crore rupees directly in the bank accounts of the retired soldiers. He said that by launching 104 satellites in one go it created history. It has emerged as a global leader in the field.

The BJP President said that the bravery that the soldiers displayed in the surgical strike and the political willpower that our Prime Minister Shri Narendra Modi displayed haw helped India to emerge as a strong nation in the world. He said that the BJP government passed the Enemy Property Ordinance proving that it is a nationalist government. He said that by demonetization, taking action against shell companies and by creating the Benami Transactions law, the Modi government has taken decisive steps for putting an end to the black money in India. He said that the Prime Minister Shri Narendra Modi Ji presented to the country with a new thinking of making reforms in the electoral process in India so that all elections can take place simultaneously, from the Lok Sabha to the Panchayat elections. This will decrease the burden of democracy on the people of the country.

The BJP President said that the Modi Government has taken many steps for the development of the north-east India too. He said that it is because of the Modi government that Indian culture has got respect from the entire world through the medium of Yoga. By including the Light Fighter Jet ‘Tejas’ in Indian Air Force, a great boost has been given to the ‘Make in India’ initiative. The modernization of Indian Army is proceeding apace. He said that in the Paris Agreement on Climate Change, entire world has praised the role of India and India has also emerged as a global leader in this arena. He said that the BJP government under the leadership of our Prime Minister Shri Narendra Modi Ji has also changed the VIP culture by putting an end to the red beacon. He said that with campaigns such as ‘Beti Bachao, Beti Padhao’, ‘Namami Gange’, and the ‘Swachchhata Abhiyaan’, the Modi government has taken the initiative of solving public problems through public participation.

The BJP President said that under the Pradhan Mantri Jan Dhan Scheme more than twenty-eight and a half crore accounts were opened in the country and they were connected with the mainstream of Indian economy. He said that under the Pradhan Mantri Jeevan Jyoti Beema and Jeevvan Suraksha Beema schemes, around 13 crore citizens have been provided with the social security cover. Under the Ujjwala Scheme, around two crore women of the country were provided with the gas connection. Under the ‘Give it up’ scheme, around one crore people have chosen not to take subsidy on gas. Through the medium of generic medicines, health benefits have reached to the poor of the country. The cost of stent has been reduced to around 80%. He said that from those 18 thousand villages which did not have electricity even after 70 years of independence, this government has taken the electricity to 13 thousand of those villages. The rest of the villages will have electricity by 2018. He said that through the medium of currency banks loan have been sanctioned to seven and a half crore youth for creating self-employment. He said that the government aims to make the country free of leprosy and black fever by 2018. By 2020 it aims to make the country free of smallpox. The country is moving fast in this healthy direction.

The honourable President said that the Modi government has constructed more than four and a half crore of toilets in the country. It has vaccinated around seven and a half crore children under the Mission Indradhanush scheme. The task of upgrading the youth is going apace under the Skill India scheme. Around 8 crore people in the country have been provided with employment under Start-up India, Stand-up India, Skill India and Currency Scheme. He said that the Basic Minimum Wage has improved by around 42%. Many problems of the labourers have been solved by the Universal PF Account. He said that the pension of poor and old labourers has been increased to a minimum of rupees one thousand. He said that the Modi government has also removed the necessity of the interview for the recruitment of Class III and Class IV employees. All the state governments of the BJP have adopted this transparent model.

India: The Fastest Growing Big-Economy in the World

Shri Shah said that under the leadership of Prime Minister Shri Narendra Modi Ji, India has become the fastest growing big economy in the world. The inflation is under control. The Foreign Exchange Reserve is at a record high. In one year, the foreign currency sensex has crossed 31000 and NIFTY is also at a record high level. He said that in electricity availability India was at 99th place in 2014, but now it has taken a leap of 76 places and now is at the 26th position. This is a big achievement. He said that the industrial development rate has been above 5%. He said that according to the IMF, the growth rate of India is predicted to be around 7.2%, while the UPA government had left the economy at a measly 4.8% growth rate. He said that in a record third straight year, there has been an improvement in the agricultural development rate. Under the UPA government led by the Congress Party, the growth rate was negative. Under the Modi government it has been constantly above 4%. He said that India’s place in the Global Competitive Index, has been improved from 71st to 39th position. He said that after an initial decline in export, it has taken a turn and has been constantly increasing. In the month of March, it has increased by the rate of 27.6% at an annual rate. An increase of 45% has been achieved in the FDI. Export has increased. We have been successful in cutting down the interest rates. We have been able to maintain the public exchequer at 3.9% and increase has been registered in Direct Tax Revenue and Indirect Tax Revenue of around 20% which has been highest since independence. He said that in the last fiscal year, while the Per Capita Income was 93,293 in the last fiscal year, it is now predicted to be 103,007 in this fiscal year.

The Fight against Black Money

The BJP President said that under the leadership of Prime Minister Shri Narendra Modi Ji, the BJP government in the last three years has taken many measures to put an end to black money. He said that the Modi government took the historic decision of demonetization and showed its commitment to putting an end to black money in the country. By taking action against shell companies and by bringing law against Benami property, the Modi government has taken a decisive step in the direction of abolishing black money from India. He said that in the transparent auctioning of Coal Block Allocation and Spectrum corruption has been rooted out from it.

He said that around 15 thousand crore of Benami property was seized, which was acquired through money laundering. It shows our commitment in our fight against corruption. He said that corruption of around 9.36 lakh crore has been brought to light. The routes of Cyprus, Singapore and Mauritius through which the black money re-enters the country have been shut down. He said that the Modi government has taken a brave step of limiting the cash donation to 2,000 rupees. This will kill the impact of black money from the electoral politics of the country and will usher in a clean public life.

A Government Committed to the Welfare of the Farmers

Honourable National President said that the Modi government has taken many initiatives for the welfare of the farmers. He said that for uplifting the living standards of the farmers many schemes such as Soil Health Card, Neem-coated Urea, Pradhan Mantri Irrigation Scheme, e-mandi etc. have been undertaken. He said that under the Pradhan Mantri Crop Insurance Scheme, measures have been taken to ensure the safety of the crops from the fields to go-downs. He said that the Minimum Support Price of Rabi and Kharif crops, has been increased for the third straight time by the government. The government has provided great benefit to the farmers growing pulses by buying their crops at MSP. Facilities provided to the farmers have been bettered through Kisan Credit Card. He said that all parameters of providing help to farmers during emergencies have been upgraded. The allocation sum which is given to the farmers has been doubled. The sugarcane farmers have been almost completely paid for their crops. He said that through Neem-coated Urea, a decrease has been registered in the use of pesticides and fertilizers. Along with that, the price of fertilizers and manure has fallen for the first time since independence.
Progress in Infra-structure Development
Shri Shah said that under Modi government roads are being constructed at a record pace, which is unprecedented since independence. Work is being done to make the national highways Levy Free and Crossing Free. The largest tunnel has been inaugurated in Jammu and Kashmir by our Prime Minister Shri Narendra Modi Ji. Just today, the Prime Minister has inaugurated the Bhupen Hazarika Bridge connecting Assam to Arunachal Pradesh. He said that our Electricity Generation Capacity has been increased by one-third and Electricity Transmission has been increased by one-fourth. He said that crores have been invested in the modernization of the railways. He said that the Modi government has distributed around 30 crore LED bulbs. He said that in the last year, we have been successful in bringing around 28 lakh foreign tourists to the country. This sector has seen an increase of 13%. He said that under the Gram Sadak Yojana around 130 km of road is being constructed daily. Cheap flights have been started. Work is under progress in Sagarmala Project and in Naval Navigation too, a lot of countries are coming together with India. Home Loan Rate has been cut down to the relief of the people and the dream of having a house is now becoming a reality.