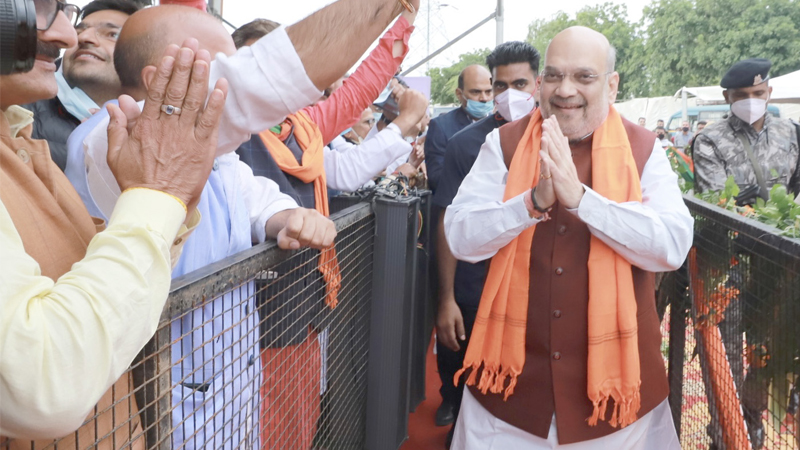 August 5, 2019 is remembered as the most historic and the golden day of post-independence India when the unfinished agenda of complete integration of Jammu and Kashmir was executed by abrogating of Article 370 and the dream of Dr. Syama Prasad Mookerjee ‘Ek desh mein do vidhan, do pradhan aur do nishan nahi chalenge’ (In one country, two different sets of legislature, executive, and judiciary cannot function) was fulfilled. The Article 370 gave a special statue to the state although it was yet discriminatory and obstacle in development of the state. It was supposed to be a temporary provision in the Constitution of India, but it was perpetuated due to the vested interest of various political parties.

Under the able leadership of Prime Minister Shri Narendra Modi, Union Home Minister, Shri Amit Shah became the architect of modern and new Kashmir.
Dr. Syama Prasad always believed that the Article 370 was working as a deterrent for the cultural unification of India and Kashmir and it was harmful for the unity of the country. As a founder of Jana Sangh he sacrificed his life for the cause of complete integration of Kashmir and for abolishing the permit rule in Kashmir.
In fact, the Article 370 had become a sweltering wound which became septic and dangerous to the overall health of the nation. Scrapping of Article 370 was a surgery which was necessary.

Whenever the history of India would be written dispassionately, this will be hailed as one of the biggest steps by the Modi Government who is known for its strong, decisive and farsighted decisions. Shri Amit Shah visited Kashmir this week for the first time after the abrogation of Article 370. The new approach of Kashmir policy adopted by the Union Home Minister is clear- Justice for all, appeasement for none and at no cost anyone would be allowed to disturb the peace of the state.
Immediately after landing in Srinagar, he went straight to the brave policeman who made the supreme sacrifice while protecting the national integration and sovereignty of India.

Later, he took a high-level meeting on the security situation in Kashmir.
He was well received by all the sections, classes and regions of Kashmir. The focus of the new Kashmir-policy is the people of Kashmir and specifically the Kashmiri youth. The Home Minister extended his hand of cooperation to the Kashmiri Youth and urged them to work for the development of the New Kashmir which is full of opportunities, growth and development.

The last 2 years have seen ‘Kashmir’ move on the road to national and cultural-integration; unprecedented all round development and economic-growth. The pellets and guns have given way to ballot papers. There are hardly any incidents of stone-pelting or violent protests. The secessionist gang of Hurriyat has been dismantled. Kashmir is not witnessing any curfew, forced-protests, and ‘Bandh-call incited by Pro-Pakistani Hurriyat conference.

Kashmir has seen a protracted arms insurgency by a few miscreants supported by the terrorist nation of Pakistan. After the removal of Article-370, there is a substantial and measurable decline in terror-activity in the J&K Union Territory. As per one report of the Home Ministry, there is a decline of terror incidents up to 60% in Jammu and Kashmir which has reported 614 terror incidents in 2018, while the number reduced to 244 in 2020.

A new targeted approach of development, political-healing and political-participation at the ground level has been initiated at a massive level. In the peaceful election of DDC in December 2020, 100 women were elected for the first time which had a voting turnover of 52%. For the first time, reservation was implemented in the political field following which 6 women, 2 leaders belonging to SC and ST were elected as chairpersons. The communities like Gujjar and Bakarwals were also made part of the political process. Financial delegation to local bodies with 1500 crores in their kitty and delegation of 21 subjects were given.
Till date, 168 MoUs worth Rs 13,600 crores of investments and 5,000 acres of government land has already been allotted. Roads infrastructure is being developed at war-footing. There is a new Helicopter Policy to link the accessibility of internal areas of Kashmir. Almost 2,273 projects worth Rs 5,979 crores have been sanctioned, 506 projects have been completed. Many new hydro projects in the UT have also been coming up like  — Ujh and Shahpur Kandi — which were in limbo for over five decades.

The development has been multi-sectoral, with 14 major sectors such as tourism, hydropower, electricity, education, and health receiving special attention. Seven new medical colleges have been established in the education sector, with four of them now operational. Medical seats at colleges have also been increased from 500 to 955 and   25,000 seats have been added in regular degree colleges. IIT has come up at Jammu. Similarly, the health sector is prioritized with a universal health policy under which health cover has been given to one crores local residents. Region of Ladakh is on the road to development after it has acquired its long cherished dream of being a Union Territory. It is a nostalgic feeling to see Tricolour flying at the Lal-Chowk which many times witnessed the hoisting of anti-India flags.