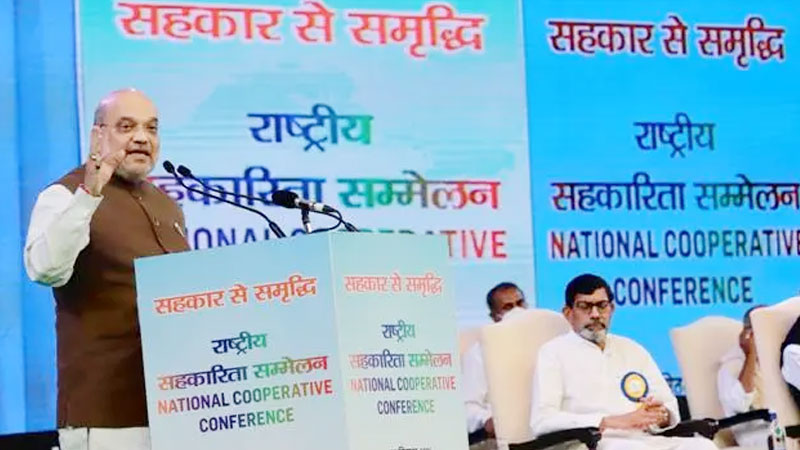 India’s first Cooperation Minister Shri Amit Shah on 25 September while addressing ‘National Cooperative Conference’ in New Delhi said cooperative movement will create social capital and will ensure progress of rural area. Earlier, Prime Minister Shri Narendra Modi termed cooperative as alternative of socialism and capitalism. The ‘International Cooperative Alliance’ (ICA) defines a Cooperative as “an autonomous association of persons united voluntarily to meet their common economic, social, and cultural needs and aspirations through a jointly-owned and democratically-controlled enterprise.” In other words, cooperative infuses feeling of collectiveness in every sphere of life whether be it cultural, social or economic sphere. Certainly, this movement will be helpful in creating social capital as well as bringing economic democracy. Social capital is a set of shared values that allow individuals to work together in group for effectively achieving a common purpose.

Many thinkers like Durkhiem, Georg Simmel, Weber believed that industrialization and urbanization had been transforming social relationships in an irreversible way. They assessed that industrialization and urbanization had broken the social bounding, rich tradition of cooperation and uprooted moral values and brought feeling of alienation in human being. But it is worth mentioning that industrialization and urbanization are a part of developmental activity. But, where flaw lies. Flaw lies how to regulate ownership. Two dominant models of economic activities are prevailing world-wide. First is private ownership on means of production and second is state’s ownership on means of production. Private ownership is mostly found in capitalist system and state ownership is found mostly in socialist system. Capitalist mode of production emphasizes maximizing its profits.Unequal distribution of income under capitalist economy deepens trench of rich and poor. Poor become poorer and the rich become richer. This mode of production encourages accumulation of wealth in hands of few people. Due to accumulation of wealth in the hands of few people affects idea of economic democracy.It results in economic imbalance and diminishes consumer purchasing power. It leads to economic crisis. Socialist system curtails entrepreneurial opportunity and is responsible for slow economic growth. It has failed everywhere.

In this system a major population is deprived of economic opportunities. On other hand,it increases dependency of people on state and state’s regulations in day-today life of people. Both have deteriorated shared values and feeling of cooperation in society and also hampering values of economic democracy.Economic democracy is one of the main features of cooperative movement. It stresses unlike communist state, not to abolition of private property but on abolition of employment relation, emphasizes on Producers’ self management and it encourages localism. PM Shri Modi also has emphasized on ‘vocal for local’ for achieving goal of ‘Aatmanirbhar Bharat’.

Through carving separate ministry for cooperative movement, Modi government intends to deepen economic democracy and strengthen marginalized section economically. While inaugurating Amul’s chocolate plant at Anand he has emphasized that the cooperative movement in Gujarat has built a successful alternative model to both socialism and capitalism; the seeds sown by Sardar Vallabhbhai Patel about a century ago has blossomed as the third economic system, where neither the government nor the capitalists will have control. This cooperative movement will develop and grow with the participation of farmers and everyone will be a stakeholder in it.

Creating separate Cooperation Ministry at Center, Prime Minister Shri Narendra Modi has indicated that only cooperative can give alternative to socialism and

capitalism.The cooperative model has capability to diminish demerits of both existing models -capitalist and socialist . Cooperative model stands for collective ownership. It brings economic democracy in true sense. Unlike big corporate houses where decision taken by corporate manager and corporate share holders,in cooperative decision making power rests in a larger group of members that includes producers, customers, suppliers and the broader public and its profit is distributed among members. Amul,LizzatPapad, Saras, Sudha dairy are epitome of cooperative movement which have given direct and indirect crores of employment. Lijjat papad is an Indian women’s worker cooperative involved in manufacturing of various fast-moving consumer goods and has empowered the women by providing them employment opportunities.Amul and Lizzat Papad also have emerged as international brands.They are giving tough fight to MNCs in market.Cooperative system can play vital role in flourishing of specially agriculture and allied sectors and give strength to economy of rural areas.

There are examples of such countries where cooperative made them pioneer in the world. Cooperative is considered backbone of development of Israel.Israel’s geographical condition and soil quality is not suitable for agriculture. In spite of all odds,today, Israel is leader in the world in agricultural research and development and agriculture technology. Agriculture under Kibbutz (Co-operative) played substantially in development of Israel.Its research and innovation have led to spectacular way in increasing the country’s crops quantitatively and qualitatively.

Cooperative movement has been proved miracle in development of agriculture and allied sectors in this country. In Israel, cooperative is known as Kibbutz economy.The word ‘kibbutz’ means gathering.Young Jews who had previously worked very hard on wet-land for the purpose of agriculture and human habitation built a community for themselves. The land was bought by the Jewish National Fund. They did harsh labor to make the land fertile. These pioneers created a community founded upon agriculture was known as Kibbutz. Gradually many Kibbutzs came into existence in Israel for working in agriculture sector. The feeling of cooperativeness led the Israel technologically very advance in agriculture and the country became pioneer in agriculture technology in the world. According to touristisrael.com,in the 1960’s, only 4% of Israelis lived in kibbutzim. Today, kibbutzniks make up 15% of the members of Israel’s parliament, the Knesset.

Other example is of Japan’s development of post second world war.For postwar development, Japan adopted cooperative approach. Pre-war four major companies collectively known as Zaibatsu had dominance in every sphere of the country’s economy. After defeat of Japan by allied forces, Zaibatsus were dissolved. Postwar, shareholding pattern in Zaibatsus has been changed. Families lost absolute control on Zaibatsus. Post-war Zaibastu were owned by various firms, individuals but not by one family.

Other example is of Japan’s development of post second world war.For postwar development, Japan adopted cooperative approach. Pre-war four major companies collectively known as Zaibatsu had dominance in every sphere of the country’s economy. After defeat of Japan by allied forces, Zaibatsus were dissolved. Postwar, shareholding pattern in Zaibatsus has been changed. Families lost absolute control on Zaibatsus. Post-war aibastu were owned by various firms, individuals but not by one family.

Dedicated ministry for cooperation in India will accelerate the pace of cooperative movement which intends for the upliftment of marginalized sections and marginalized sectors too.Modi government in June, 2021 streamlining the agriculture related cooperative movement has launched Scheme of “Formation and Promotion of 10,000 Farmer Producer Organizations(FPOs)” to form and promote 10,000 new FPOs till 2027-28 with a total budgetary outlay of Rs.6865 Cr. Till now, Cooperative movement has focused mainly in banking(credit),agriculture, agriculture related products, housing sectors and so on. Cooperative approach in coming days will be viable for other sectors as well.

(The writer is Associate Editor of Kamal Sandesh)