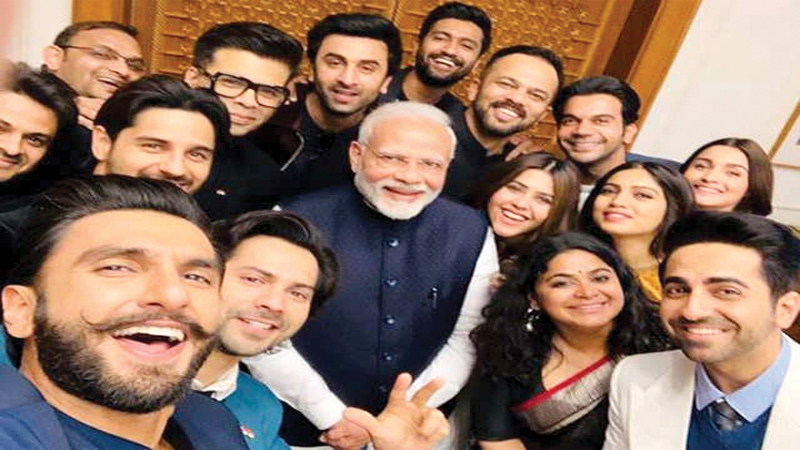 Ahead of the 2019 Lok Sabha Elections, Prime Minister Shri Narendra Modi has reached out to several celebrities across domains urging them to encourage the voters of India to come out and execute their rights. In a series of Tweets, he addressed several A-listers from the sports and entertainment industry asking them to create voter awareness.

Drawing reference to Vicky’s iconic ‘How’s the Josh’ dialogue and Ranveer’s ‘Apna Time Aayega’, the Prime Minister Tweeted, “My young friends @RanveerOfficial, @Varun_dvn & @vickykaushal09, Many youngsters admire you. It is time to tell them: Apna Time Aa Gaya Hai and that it is time to turn up with high Josh to a voting center near you.”

In one of the posts, he tagged ‘Uri: The Surgical Strike’ actor Vicky Kaushal along with Varun Dhawan and Ranveer Singh, asking to join the initiative and influence the young voters. Actor Vicky Kaushal responds to Prime Minister Shri Narendra Modi’s ‘Vote For India’ Election 2019 Clarion Call.

Sharing the same stance with PM Shri Modi, the actor pointed out how ‘every vote is a building block for democracy’.

In a tweet tagging Ranveer Singh PM Shri Modi asked to create voter awareness. Ranveer Singh took to his twitter handle and responded to the Prime Minister. He wrote: “We must all be responsible young citizens of our great democracy and exercise our right to vote. Desh ke naujawaan..Vote karneka waqt aa gaya hai”[sic]

Bhumi Pednekar immediately responded to PM Shri Modi’s tweet and wrote: “To all the citizens of this great democracy…each one of us have the right to vote, a power that comes with great responsibility. And each one of us must become a part of shaping the future of our country. Go vote everyone!”

In reply to the Prime Minister, actor Mohanlal said that it is indeed his privilege to request his fellow citizens to exercise the right to take part in a democracy, which would help its better functions. The actor took to his twitter and wrote, “Certainly, Sir. It will be my privilege to request all the fellow citizens to exercise their right for a vibrant democracy.

PM Shri Modi tagged Varun Dhawan in one of the tweets and the actor has a perfect reply to it. Varun wrote: “Yes your totally correct honorable prime minister. Every vote has equal power. Every vote counts. This election day, make your vote count. #mumbaikarvotekar #indiavotekar #FestivalOfDemocracy”

Akshay Kumar wrote, “ Well said @narendramodi ji. The true hallmark of a democracy lies in people’s participation in the electoral process. Voting has to be a superhit prem katha between our nation and its voters :)”

Karan Johar said, “Honourable Prime Minister @narendramodi we as a fraternity are dedicated to the cause of creating high voter awareness and will make sure every endeavour is made to communicate the power of voting for a solid and Democratic INDIA! Jai Hind!”

Responding to PM’s tweet “When @mangeshkarlata Didi, @sachin_rt and @arrahman say something, the nation takes note!” AR Rahman said We will definitely do it.

Apart from them other celebrities also responded positively for ‘Vote For India’ appeal and assured their participation in the movement.

Tagging almost 100 celebrated personalities from the fields of politics, entertainment, news media, sports and social work on Twitter Shri Narendra Modi urged them to leverage their popularity to “ensure high voter awareness and participation in the coming elections”.

He also urged actors from the entertainment industries in the South, social activists, religious leaders and influential businessmen to “to help increase voter awareness and tap the power of society for democracy”.