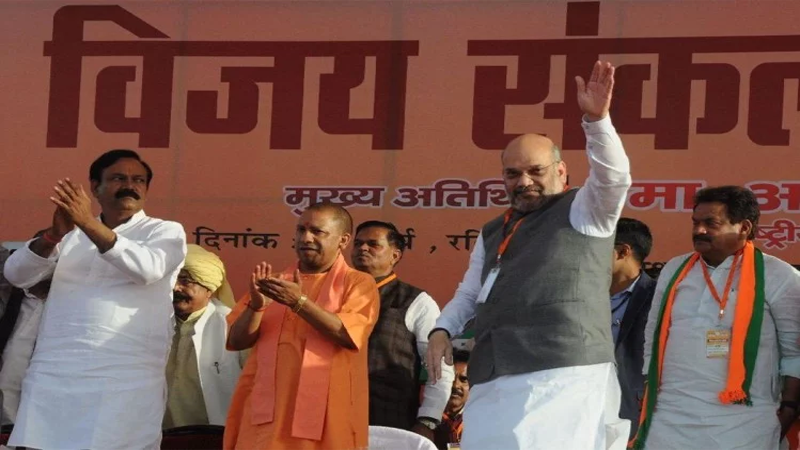 The Bharatiya Janata Party National President Shri Amit Shah kicked off the election campaign for the 2019 Lok Sabha polls with the ‘Vijay Sankalp’ rally in Agra on 24, March,2019. UP Chief Minister Yogi Adityanath was in Saharanpur for the campaign on the same day. ‘Vijay Sankalp’ rallies will be held in majority of the 80 Lok Sabha constituencies of Uttar Pradesh with focus majorly on western UP where polls will be held in the first phase. CM Shri Yogi, several union ministers and BJP leaders would similarly address public meetings across the state in favor of party candidates.

Addressing the Vijay Sankalp Rally in Agra, Uttar Pradesh BJP National President Shri Amit Shah taunted the opposition saying it has no leader to become Prime Minister even if it were to win the general elections.

He said the Modi government has worked for the development of the entire nation and not for any particular community and cited the scheme of direct cash transfers to farmers and medical insurance for the poor as the government’s commitment to all-round development.

‘The major issue in this election will be BJP’s development versus the corruption of the mahagathbandhan,” he said
Shri Shah praised PM Modi for the surgical strikes across the LoC and in Balakot after the terror attacks in Uri and Pulwama. He criticised Congress president Rahul Gandhi and Sam Pitroda for their comments on Balakot air strike and accused the opposition of indulging in vote bank politics by abusing the defence forces of the country.

“Sam Pritoda raised questions about Balakot air strike. I ask if they are related to Pakistanis,” he said.

“There used to be two countries, US and Israel which used to be known for avenging its soldiers. Now India has become the third country to do so under PM Shri Modi. Only Shri Modi can ensure the country’s security,” Shri Amit Shah said to chants of Modi, Modi.

“Election should be fought for the nation’s security and development and should not be contested to fulfill someone’s wish to become Prime Minister,” Shri Shah said.