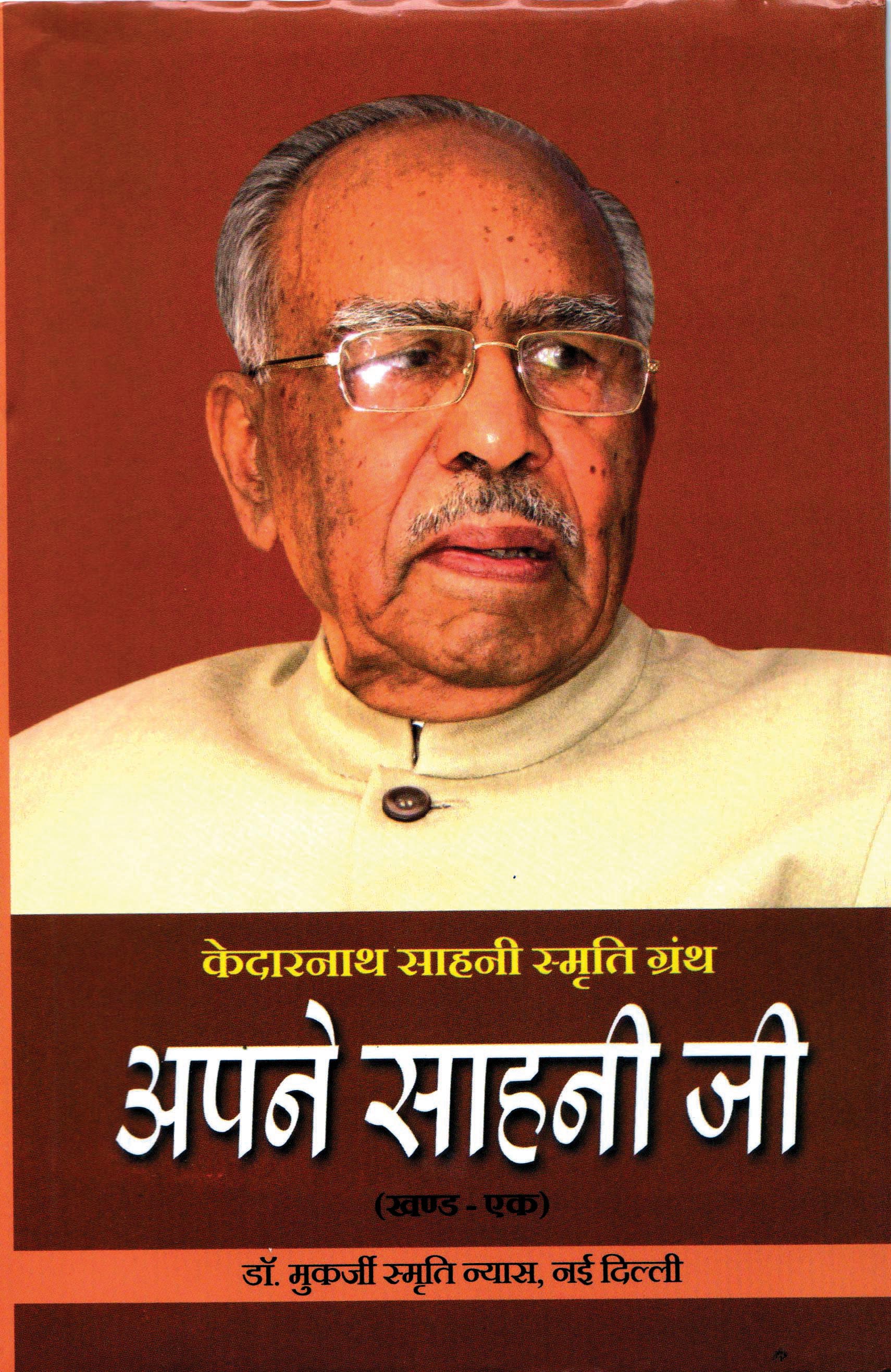 Published in two volumes Apne Sahni Ji is a compendium of articles based on the memory of various eminent persons who came in touch with the versatile personality of Shri Kedar NathSahniJi (24 Oct. 1924 – 3 Oct. 2012) These articles have been contributed by politicians cutting across party lines, party workers, family members and various other people belonging to different scales of eminence. As one goes through them, one cannot avoid noticing subtle changes which start occurring in one’s personality and perspective of life. A study of these two volumes is complete education for leading an exemplary public life and gratifying personal life.

Life of Shri Kedar NathSahniJi was an epitome of public service taken at great personal sacrifice. Although these two volumes do not conform to the rules of strict biographical sketch, however, they touch upon almost all the dimensions of Shri Sahni’s varied and eventful life. The book is so absorbing and edifying that it can be made a compulsory reading particularly for those who are interested in leading a life of public service and value-based political activism.

But before proceeding further to bring out the events of Shri Kedar Nath Sahni Ji’s life as narrated between the covers of these volumes, the credit is due to Dr. Mahesh Chandra Sharma, the editor of these volumes, and the same is acknowledged with thankful heart. Dr. Sharma has most skillfully performed the task of editor and has been meticulous in selecting these articles which cover almost all aspects of the multi-dimensional life of Shri Kedar Nath SahniJi. Dr. Sharma has done great service to readers by compiling these articles in the form of books and making them accessible to those who are interested in knowing how the initial Swyamsevaks like Sahni Ji worked so hard and fought so many battles to build a huge organization like Jan Sangh, known as Bhartiya Janata Party today. Not only would the workers of Rastriya Swayam Sevak Sangh and Bhartiya Janata Party benefit from this work, but also those who choose the arduous path of public service and political activism.

The title of the book is truly representative of what has been collected between the covers of these two volumes. As SahniJi selflessly dedicated his whole life for the benefit and service of society to the extent of self-abnegation and he became very much our own, hence the title – “ Apne SahniJi”. Sahni Ji was such a towering figure and source of strength in the public life that people belonging to both political and apolitical backgrounds sought guidance from him whenever faced with some knotty issues and that is why these volumes contain memories of people working in different areas of life.

Shri Kedar Nath SahniJi was born on 24 October, 1926 at Thatta Village of Rawalpindi in Pakistan. His father Shri Keshav Das SahniJi was Squadron Leader in the Army. The source of his disciplined and courageous life can be traced to his army background. The courage and fearlessness of SahniJi will remain unsurpassed, an instance of which has been narrated by one of his relatives when the Bus in which he was travelling was surrounded by heavily armed terrorists who were going to shoot all the passengers. Sahni Ji showed courage and conviction and  dissuaded the gun-toting terrorists from shooting innocent people and in this way he saved many innocent lives.

After completing his primary education in his hometown, Sahniji came to Jammu in 1942 for further studies in the Prince of Wales College and from here he began his life-long journey of service to society and nation. Sahniji met Shri Prem Nath Dogra ji in Jammu who was the head and the most active worker of the RSS and became greatly influenced by the personality and working style of Dogra Ji. The punctuality of time, the gravity of personality and the clarity of thought in Sahni Ji can be traced to the influence of Dogra Ji.

Sahni ji made Mirpur in Jammu his area of his activity and here his absolute dedication to service of society and organizational skills became noticeable. SahniJi became very dedicated Swayamsevak of the RSS at the early age of 16 and demonstrated his mammoth capacity for service to the nation. Mirpur in Jammu became witness to his courage and military skills when he took upon himself the daunting task of preparing the local people to repulse the Pakistani invasion of Jammu and Kashmir in the aftermath of partition.

He was instrumental in accession of Kashmir to India as he accompanied Guru GolwarkarJi to persuade Raja Hari Singh to join the Indian state.
After the assassination of Gandhiji, the RSS was banned for political reasons and many RSS workers were incarcerated.Sahni Ji also had to spend long time in Hissar Jail, but his love for social service and honesty saw no waning. It can be illustrated by noticeable event which took place in Hissar Jail when some belongings of a Jail inmate was stolen in the Jail; SahniJi took a vow not to take food and water till it was returned and fortunately the same was returned. Jail authorities were impressed by this episode and permitted him to start a Sakha there.

SahniJiwas a vocal advocate and an ardent practitioner of honesty in public life. He did not compromise with his principles even in the most compelling circumstances. He was epitome of rectitude in public life and never used his position to garner any benefit for himself or his relatives and when anybody tried to use his name to take any benefit, he had to face strongest reprimand from SahniJi. An instance of which can be given, when his relatives wanted to buy some flats in Delhi and builder said that if Sahniwould call him, the builder would deliver flats ata low price. The relatives approached SahniJi for this purpose, but herefused to entertain them at all.

He came to Delhi in 1954 and was nominated as GeneralSecretary of Jan Sangh in 1957. SahniJiset unprecedented example of building organization from scratch in almost no time.

Sahni Ji tied matrimonial knot with Smt.VimalaSahni in 1961. One anecdote is very famous from this marriage. Hedid not believe in extravagance in the marriage which he considered the cause of many social evils prevalent in Indian society. SahniJi was chief executive counselor of Delhi which was equal to the post Chief Minister when there was no legislative assembly in Delhi. Even after holding such a high position, SahniJi did not have his own house in Delhi.

During the Emergency, SahniJi did not give up his hope for democracy and kept preparing for election. Arrest warrant was issued against him. He escaped to England in disguise and kept organizing people and raising his voice against the imposition of Emergency from there.

While serving as Governor of Goa and Sikkim he set imitable example of maintaining proper Centre-State relation. Sahni Ji left us all for heavenly abode on 3 October, 2012 and plunged us all in deep ocean of sorrow. However,his life will remain a beacon light for those who continue their journey of life and his ideals will keep reminding us to contribute our bit to the upward journey of human civilization.

Life of Sahni Jiis so varied and eventful that it is not possible to confine it in a few pages of these two volumes. However Mahesh Chandra Sharma Ji deserves full commendation for his selection of these articles in these two volumes which successfully lay out the many-splendored life of a true Karmyogiwho was a great worker, strategist, tactician, thinker, administrator, a political philosopher and above all, a great organization-builder.

(The writer is a practicing advocate)