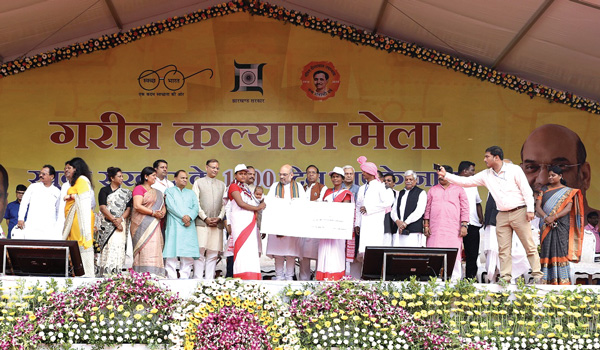 As part of his Nationwide Pravas, BJP National President Shri Amit Shah arrived in Ranchi on a three -days visit to Jharkhand on 15 September, 2017. He was received at the Birsa Munda Airport by Chief Minister Shri Raghuwar Das, BJP State President Shri Laxman Gilua and other senior leaders of the party. After his arrival Shri Shah paid his respects to the legendary freedom fighter of Jharkhand Birsa Munda by garlanding his statue. He then inaugurated ‘Swachhata Pakhawara’. During his three-day visit to the state the party National President attended around 19 meetings.

While addressing party Karyakartas, Shri Amit Shah called upon workers to strengthen the party’s Jharkhand unit. He said in his 110 days of the journey across the country, Jharkhand is the 22nd state. The aim is the expansion of organizational works of the party, he said.

He said that the BJP has been getting support from the people as seen in the Lok Sabha and Assembly elections, but the party has to reach its peak. He added there is no need for over-enthusiasm. He said constructive results are being seen and there is enthusiasm among the workers.
The BJP President also said that there was no place for merit in the Congress party and it indulges in family fiefdom since Independence. He said that only the BJP and the left parties had internal democracy.

Referring to Jharkhand, Shri Shah asked the gathering, “Who will run the party after Guruji (Jharkhand Mukti Morcha president Shibu Soren)? Does anyone have any confusion about it? He took a dig at the Congress and said that the BJP party polls were held every three years and anyone could become its president as the person was not elected on the basis of which family he belonged to.

He said the top post in the saffron party was all about commitment and merit and on the basis of that, he, who was a booth-level president of the party years ago, had become its National President.

He said the BJP was not in politics to grab power and described it as the most Democratic Party in the country. “There should be three important things for a party — internal democracy, functioning on principles and track record,” he said.

Addressing a ‘Garib Kalayan Mela’ on September 16 2017 in Ranchi Shri Amit Shah said, “Rahul baba speaks a lot in America. But first of all Rahul baba should give ‘hisab’ (accounts) of his four generations which had ruled the country for 50 years”.
Stating that the BJP has launched several development programmes in the last three years, he said Prime Minister Shri Narendra Modi is standing like a rock with Jharkhand for its development.

He praised Chief Minister Shri Raghubar Das and his team for taking the state on the path of development and giving a corruption-free rule in the state. All round development has taken place in Jharkhand, he said.

He also praised the Raghubar Das government for bringing Jharkhand to the second position after Gujarat with a growth rate of 8.6%.
Shri Shah said former Prime Minister Shri A B Vajpayee had created Jharkhand and the present central government headed by Shri Narendra Modi is developing it.

He said that in 2014 Shri Modi during his Lok Sabha election campaign used to say that if the party came to power the eastern part of the country would be developed, which did not happen under previous governments.

Notable, as many as 46,325 beneficiaries got benefits worth a total Rs340 crore under various schemes at the ‘Garib Kalyan Mela’. Pradhan Mantri Ujjwala Yojana, Mudra Health Card, Fasal Bima Yojana and Grameen Bus Seva were some of the schemes.

Addressing a Press conference BJP National President Shri Amit Shah in Ranchi, Jharkhand said every house to have electricity by 2022. Referring to the ‘Digital India’ campaign he said that BHIM App has emerged as one of the most popular apps for digital transactions.

He said,” Minerals of Jharkhand have potential to benefit the entire country. The poverty here is slowly getting eliminated.”

Shri Shah went on to say,”Demand for the separate state of Jharkhand was fulfilled by Shri Atal Bihari Vajpayee. He said it was created by him and Modi Ji will help it prosper.”