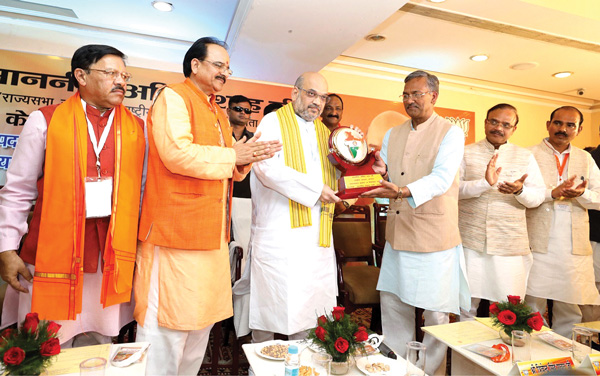 The BJP Government under the leadership of Prime Minister Shri Narendra Modi has successfully transformed India to an upswing trajectory after it rose to power in May 2014. Recalling, how economic indicators were plummeting during the 10 year UPA regime, the BJP president said that we came to power after such a Government which was badly in grip of corruption and scams.

BJP National President Shri Amit Shah visited Uttarakhand for two days starting from 19 September, 2017 as part of his 110-day nationwide tour to strengthen and take stock of organizational work of the party in the states. Shri Shah, who visited the state for the first time after piloting it to a big victory in the state assembly elections in March, landed at the Jollygrant Airport in Dehradun. He was welcomed by Uttarakhand Chief Minister Trivendra Singh Rawat, state BJP President Shri Ajay Bhatt and other senior BJP leaders at the airport. Outside the airport he was greeted by supporters, party Karyakartas and common people along the way.

During his stay Shri Shah has presided over several meeting of MPs and MLAs from the state, party’s office-bearers, core group members, Morcha Presidents and General Secretaries. He also addressed Party’s District Presidents, Zila Parishad presidents and Chairmen of Co-Operative Banks. On the last day Shri Shah also inaugurated a library at the BJP office.

Addressing meetings Shri Shah said the Centre will ensure that Uttarakhand does not face dearth of funds for development works and expressed the hope that the state government will fulfill all its poll promises.

He said six months was a short period for any government to prove itself. He said all unaddressed issues such as migration from border villages in the hills will be resolved by the Trivendra Singh Rawat government during its five-year rule.

He said while there was no provision for an economic package for any state in the recommendations of the 14th Finance Commission, allocations and grants to Uttarakhand had been substantially increased. The Centre will see to it that there is no dearth of funds for development works in the state, he said.

Asked if ‘achhe din’ as promised by the Modi government had arrived; addressing a Press conference in Shri Shah said the party leaves that for the people to decide, but added that the BJP-led NDA dispensation has done a lot in the past three years.

“2.80 crore poor mothers have been provided with LPG cylinders free of cost. One-rank-one-pension, which had been pending for over 40 years, has been implemented. 4.5 crore toilets have been built across the country and the process is still underway. By 2022, every home will have toilets and power connectivity. All this is highly commendable,” he said.

He said both the organisation and the government were moving in the right direction in the state. He said during this period the loot by mining mafia has come to an end, the liquor mafia has also been reined in and the party is getting active on the grassroots right up to the booth level.

On the last day of his two-day Pravas to the state Shri Shah inaugurated a library and e-library at the state party headquarters followed by a meeting of different departments and organizational projects. Addressing the meeting Shri Amit Shah lauded the Trivendra Rawat government’s performance over six months in Uttarakhand. “The government and the organizations are committed. In the past six months the (Rawat) government has done all that was possible for the state’s development, he said.” The Trivendra Rawat government is working according to the BJP’s vision document for the state,” he added.

Shri Shah said that the BJP Government under the leadership of Prime Minister Shri Narendra Modi has successfully transformed India to an upswing trajectory after it rose to power in May 2014. Recalling, how economic indicators were plummeting during the 10 year UPA regime, the BJP president said that we came to power after such a Government which was badly in grip of corruption and scams. During those painful years of Congress government in the country there were scams to the tune of around Rs12 lakh crore. The authority and glory of Prime Minister Office was badly diminished due to remote control-reign and every Congress minister then, used to consider himself the Prime Minister while nobody listened to the Prime Minister, Shri Shah stated. There was a policy paralysis prevailing in the country.

Prime Minister Shri Narendra Modi has brought revolutionary changes in Governance during the three years in office, the party President said. Emphasizing, how Modi Government made transparency as the centre of its governance model, Shri Shah said that it has been more than three years since we ascended to power at the centre, yet, even our staunchest opponents and critiques cannot level a single allegation of corruption against our Government.

The BJP president said the Prime Minister has provided India a corruption free, transparent and decisive government which in turn altered the world view on India favorably. Shri Modi has successfully created a globally recognized new brand-India due to which every nation is yearning to build close and harmonious bilateral relationship with our country, he said. This uplift in country’s image will certainly boost our development and economy. We have considerably controlled the spiraling prices essential commodities whereas economic indicators are improving fast.
Lunch at a Dalit worker’s residence
BJP National President Shri Amit Shah along with BJP National Vice-President and state in-charge Shri Shyam Jaju, Uttarakhand Chief Minister Shri Trivendra Singh Rawat and BJP State President Shri Ajay Bhatt have lunch at a Dalit party worker’s residence in Dehradun on the last day of the two-day visit to the state on 20 September, 2017.

Shri Shah also held closed-door meetings with the heads of 19 ‘vibhag’ or departments and 10 ‘prakalp’ or projects in the BJP’s state unit, and asked them to explain their role. The BJP’s state unit has various projects including those for office modernization, e-library creation, cleanliness drive, Namami Gange and training. Similarly, the state unit has departments dedicated to research on policy matters, national programme and meetings, publicity literature creation and election management, among others.