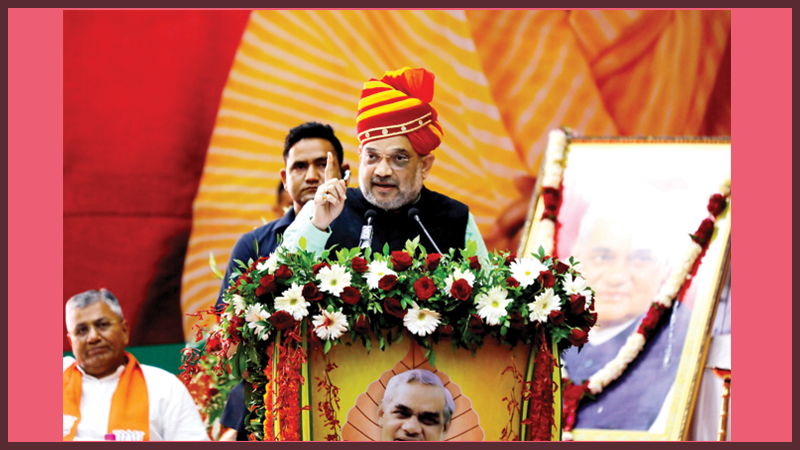 BJP has organised ‘Kavyanjali’ programme across the country on 16 September, 2018 to mark the completion of one month of former PM Shri Atal Bihari Vajpayee’s death. This program was organised at 4000 places including the national capital Delhi and all the assembly constituencies across the country. BJP National President Shri Amit Shah addressed the Kavyanjali programme organised in the memory of Atal ji in Jodhpur, Rajasthan. During this programme the poems written by Atal ji was recited and the recording of the same will also be played for the people later on. On that occasion, medical camps, blood donation camps were organised at various places to help the poor people. Party workers also launched cleanliness drive in their localities on that day.

Delhi BJP on 16 September, 2018 organised ‘ATAL KAVYANJLI’ sessions in 66 Vidhan Sabha Constituencies to pay tribute to the former PM Shri Atal Bihari Vajpayee Ji on his first month of death anniversary. At all venues Poets and Party Leaders recited poems written by Shri Atal Bihari Vajpayee and film based on his life and works was shown followed by a short film on PM Shri Narendra Modi’s childhood.

Inaugurating the Session Shri Rajnath Singh recalled various incidents associated with Shri Atal Bihari Vajpayee Ji’s life and shared some light moments with the audience during his address. He said that Atal ji was an altruistic personality who was accepted by all across political ideology.

Shri Rajnath Singh recalled the 1999 incident when Pak Infiltrates tried to enter Indian Territory, Indian Army strongly retaliated not only sending them but entered their territory too. At that point of time Atal ji asked the Indian Army to not to enter their territory as this is not our culture and hence I always say he was a person with a large heart.

Shri Singh further elaborated that he had superb diplomatic skills and recalled that there was a time when China used to stake claim on Sikkim. Due to Atal ji diplomatic skills during his 2003 visit to China the host country was forced to accept that Sikkim was a part of India.

Presiding over the program Shri Manoj Tiwari informed that the Atal Kavyanjli program is organized at 66 different locations all over Delhi and the main program is being held here at Dr. BR Ambedekar International centre. He said that Atal ji was a versatile personality who was above petty political squabbles. In parliament as opposition leaders he also used his poetic skills to win over the ruling party members.

Addressing the gathering Union External Affairs Smt. Sushma Swaraj recalled her long association with Atal ji since 1977 both in government and in organisation and said he was a great orator. We always saw a fatherly figure in him.

She recalled Atalji’s fondness for delicious foods and how he was always a perfect host on festivals as people visited him. His poems were dedicated to the nation and social causes apart from expressing his feelings.

Smt. Swaraj said that Atal ji’s life was that of a humanitarian saint dedicated to service of the people while as a administrator too he won the hearts of the people with his dedication to serve the poorest of poor.

Smt. Meenakshi Lekhi said that Atal ji was well known in the world for his poetry and best way we could give tribute to Atal ji is through this Kavyanjali Program.

Similarly, Chief Minister Shri Trivendra Singh Rawat participated in Kavyanjali programme organised by Uttarakhand BJP in Dehradun on 16 September. Various poets and speakers through their poems paid tributes to Vajpayeeji on the occasion.
Paying his tributes to the former Prime Minister, Shri Rawat said that Vajpayeeji’s personality was acceptable and popular among the masses. “His personality was full of practical simplicity. Humble but yet firm in his ideology, he was able to give a nurture political atmosphere in the country.

His speeches were historic and general masses were always eager to listen to him. He will live forever in the hearts of common people, country and the world. The country will forever get guidance from Atali ji through his poems and thoughts,” the Chief Minister said.